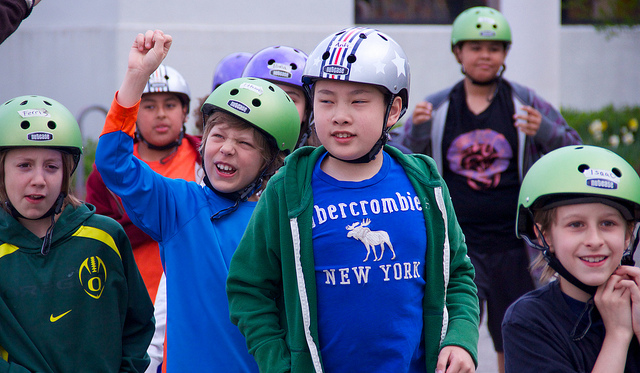 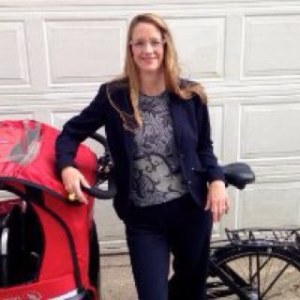 BTA and Oregon Walks were hoping the street fee could provide the monetary muscle to back up Portland’s new Vision Zero goal. Portland Bureau of Transportation Director Leah Treat (pictured, right) announced a year ago that the city would adopt a goal of zero transportation-related deaths in its next transportation plan. This January, she released that plan, promising more 4-3 road diets to reduce speeding and more rapid-flash crosswalk beacons that she said reduce walking deaths by 80 percent. It wasn’t all that advocates were hoping for. “it’s a very modest start,” said Gerik Kransky, BTA’s advocacy director. “Our campaign is still focused on a $20 million new revenue target. We had expected to be completely done with the street fee conversation by now.” Vision Zero and the street fee fell out of sync with each other a few months ago, when state officials let it be known that Portland’s attempt to pass a street fee was complicating Oregon’s attempt to pass a transportation funding overhaul, which would include a gas tax increase. Portland Mayor Charlie Hales and City Commissioner Steve Novick agreed to put the street fee on ice while the state legislature could debate the transportation package. But that doesn’t mean BTA and Oregon Walks are sitting on their hands. “It’s not going to be a big shift now," said Kransky. "But we’re going to continue to push on other things, not just the funding.” It’s always good to have more than one arrow in your quiver, and BTA and Oregon Walks have plenty. Together, they’re about to launch a new report with recommendations for Portland and surrounding cities on how to craft a meaningful Vision Zero policy, complete with policy changes that don’t require big cash infusions: things like de-prioritizing Level of Service and re-allocating existing funds to priority locations for safety improvements based on crash data. That report will launch March 30 at the Oregon Active Transportation Summit—an event that attracted 110 people in 2010 and now brings together about 450. Director Treat will open the conference, along with Paul Steely White of Transportation Alternatives, who can give concrete examples of what New York City has done—and what Portland will have to do—to make Vision Zero a meaningful and achievable goal. If Portland can't match the specificity and commitment of New York’s Vision Zero policy, Treat's Vision Zero announcement runs the risk of turning into nothing but window dressing. “Even well intentioned public leaders can get high flying rhetoric out there but not necessarily have the action plan and follow through to back it up,” said Kransky. But BTA and Oregon Walks pledge to watchdog the issue, setting concrete benchmarks and calling the city out if it doesn’t meet them.
More 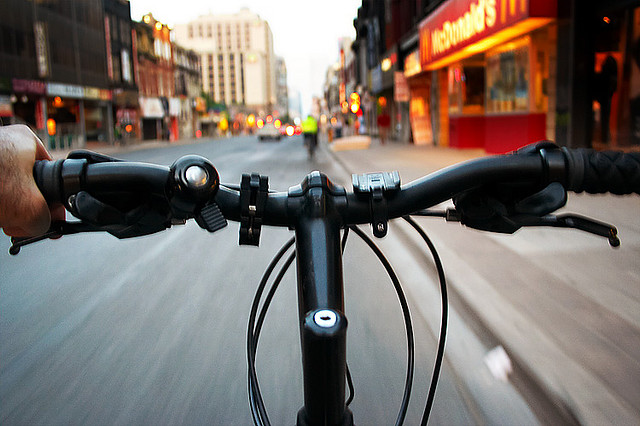 Photo by Sam Javanrouh, used under Creative Commons licensing.
Excerpted from the Alliance for Biking & Walking's blog with permission So you want to lead a great biking and/or walking advocacy organization? We can help. These 10 recommendations come from the Alliance’s many years of experience developing bicycle and pedestrian advocacy organizations and avoiding typical problems. As an advocate, you can overcome common challenges by following these recommendations. 1. Choose board members carefully. All successful organizations are started by a few dedicated leaders. It is essential to move out of this stage as quickly as possible by bringing in more board members. Choose your board members carefully because one self-serving individual can paralyze the organization. Look for leadership skills (e.g. an ability to compromise, a commitment to the organization, a broad vision), management and/or business experience, and dedication to the success of the organization. 4. Run three achievable campaigns at all times. Through strategic planning, develop a mission, vision, and goals for your organization with your board. Consider the most pressing needs for improving the bicycling and walking environment in the communities your organization serves. You and your board will come up with a long list. Pick the items that will make the most progress toward your organization’s mission and vision. Honestly assess each initiative’s fundraising potential and determine the abilities of your staff, board, and volunteers, as well as your organization’s administrative infrastructure (e.g. office, phone, computer, database). Then pick the goals that are most achievable with your organizational capacity. You should end up with two that make obvious changes on the ground in the short term, so you can draw new partners and members into your organization through promotion of your success. One campaign should be long term, maybe a legislative agenda or an intensive program like Safe Routes to Schools. These long-term initiatives bring substance to your message and your history in the community. As you achieve these successes, fold in new, achievable campaigns. Each year, create a work plan and budget around these campaigns that guide your staff and board. Attend an Alliance Winning Campaigns Training to learn best practices and key elements to plan, implement, and win your campaigns. 7. Members and donors are the most dependable and sustainable funding source. By bringing in members, you build the foundation of your organization and nurture volunteers, new board members, and major donors. Before you seek members, you must first have a system in place for prospecting, recording, thanking, renewing, and keeping track of member dues and donations. Asking for donation without the means of recording those donations or showing appreciation is a critical mistake. With those systems in place, your membership and donor base are sure to grow and become vital funding sources. Read the other seven tips at the Alliance for Biking & Walking.
More

Uncapping the Potential of the Private Sector

Moon Palace Books in Minneapolis sports a bike rack. Photo via Moon Palace Books.
Many businesses find that bikes benefit their bottom line. In some cases, it’s about creating a more competitive city or improving environmental sustainability. Or maybe managers are focused on employee wellness, advertising to target markets, or making worthwhile charitable contributions. At the same time, biking and walking advocacy organizations have so many resources to offer companies. We can offer classes and resources to help employees ride confidently and safely and consultation on becoming more bike-friendly. And, of course, there so many ways businesses can help our missions. We can always benefit from funding, support on key campaigns, and member recruitment. Our job is to make that involvement easy. We have to package “bike friendliness” as an easy solution to businesses’ problems, then have those offerings at the ready when potential business partners approach. Is your organization hoping to create or strengthen ties with the private sector? Consider emulating these examples from other state and local biking and walking advocacy organizations: State and local biking and walking advocacy organizations are making great strides in successfully partnering with businesses. Our job as advocates is to spend a bit of time researching what our colleagues are doing; adapt those approaches for our organizations; create an accessible way to market our offerings to businesses; and start the conversation.
More