Dr. Ann Riley is the executive director of the Waterways Restoration Institute, and watershed and river restoration advisor for the San Francisco Regional Water Quality Control Board. During her twelve-year tenure with the nonprofit WRI, she has organized, planned, designed, constructed, and funded numerous stream-restoration projects in California and throughout the United States. Her involvement and guidance to community-level nonprofits, as well as her work with local, state, and federal agencies in watershed planning, water quality, water conservation, hydrology, flood management , stream science, and restoration, spans four decades. Her commitment to public policy outreach includes a long history of collaboration with citizen organizations to guide federal and state policy, and she has served on committees for the National Academy of Sciences and the John Heinz Center for Science, Economics, and the Environment.

In both her private- and public-sector work, she has championed jobs and training for conservation and youth corps. In 1982 she cofounded the Urban Creeks Council in California and in 1993 was instrumental in organizing the first conference of the Coalition to Restore Urban Waters, a national network of urban stream and river organizations. In 1984 she spearheaded a program under the auspices of the California Department of Water Resources that continues today to provide grants supporting urban stream restoration.

Dr. Riley’s work in river restoration is nationally recognized and she has garnered numerous awards over her long career, including an American Rivers award in1993 for her leadership in establishing a national urban river movement, the California Governors’ Environmental and Economic Leadership award in 2003, and the Salmonid Restoration Federation Restorationist of the Year Award in 2004.

Her association with river scientist Luna Leopold reaches back to 1971 in Washington DC, and she completed two graduate degrees under his direction at the University of California, Berkeley. Dr. Riley is an urban farmer at her home in Berkeley, California, where she raises chickens and bees, grows food, and home-brews mead and beer that win awards at state and county fairs.

She is the author of Restoring Streams in Cities and Restoring Neighborhood Streams, both published by Island Press. 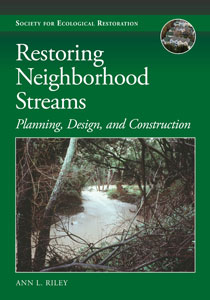 Thirty years ago, the best thinking on urban stream management prescribed cement as the solution to flooding and other problems of people and flowing water forced into close proximity. Urban streams were perceived as little more than flood... 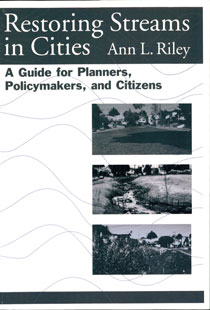 A Guide for Planners, Policymakers, and Citizens
More

Conventional engineering solutions to problems of flooding and erosion are extremely destructive to natural environments. Restoring Streams in Cities presents viable alternatives to traditional practices that can be used both to repair...