Donald Kennedy is the Bing Professor of Environmental Science and President emeritus at Stanford University in Stanford, CA. In 1977 Dr. Kennedy took a 2 1/2 year leave to serve as Commissioner of the U.S. Food and Drug Administration. This followed an increasing academic interest in regulatory policy regarding health and the environment, which included the chairmanship of a National Academy of Sciences study on alternatives to pesticide use and membership on the World Food and Nutrition Study.

Following his return to Stanford in 1979, Dr. Kennedy served for a year as Provost and for twelve years as President, a time marked by renewed attention to undergraduate education and student commitment to public service, and successful completion of the largest capital campaign in the history of higher education. His present research program, conducted partially through the institute for International Studies, consists of interdisciplinary studies on the development of policies regarding such trans-boundary environmental problems as: major land-use changes; economically-driven alterations in agricultural practice; global climate change; and the development of regulatory policies. He co-directs the Environmental Studies Program in the Institute for International Studies, and oversaw the introduction of the environmental policy quarter at Stanford’s center in Washington, DC in 1993. 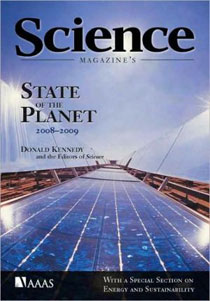 with a Special Section on Energy and Sustainability
More

Taken from the pages of Science and supplemented by contributions from the magazine’s editors, State of the Planet 2008-2009 offers contemporary science writing that is sometimes provocative, frequently enlightening, and always... 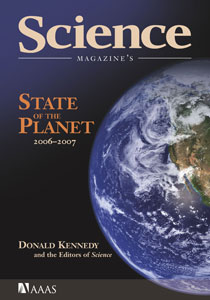 How often in today's environmental debates have you read that "the science is in dispute"-even when there is overwhelming consensus among scientists? Too often, the voice of science is diminished or diluted for the sake of politics, and the...