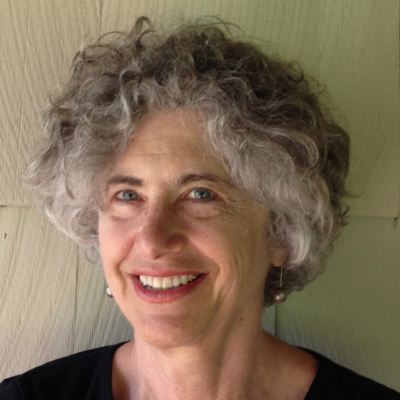 Hillary Brown, FAIA, is Founding Principal of the firm New Civic Works and Professor at the Bernard and Anne Spitzer School of Architecture at the City College of New York. Previously, Brown served as Assistant Commissioner of the City of New York, where she was Founding Director of New York?s Office of Sustainable Design and led publication of the nationally recognized City of New York High Performance Building Guidelines and High Performance Infrastructure Guidelines. She currently serves on the National Research Council of the National Academies? Board on Infrastructure and the Constructed Environment. Brown has served on both the national and New York Chapter Board of Directors for the U.S. Green Building Council and is a Fellow of the Post-Carbon Institute.

A Bridge Not Far Enough 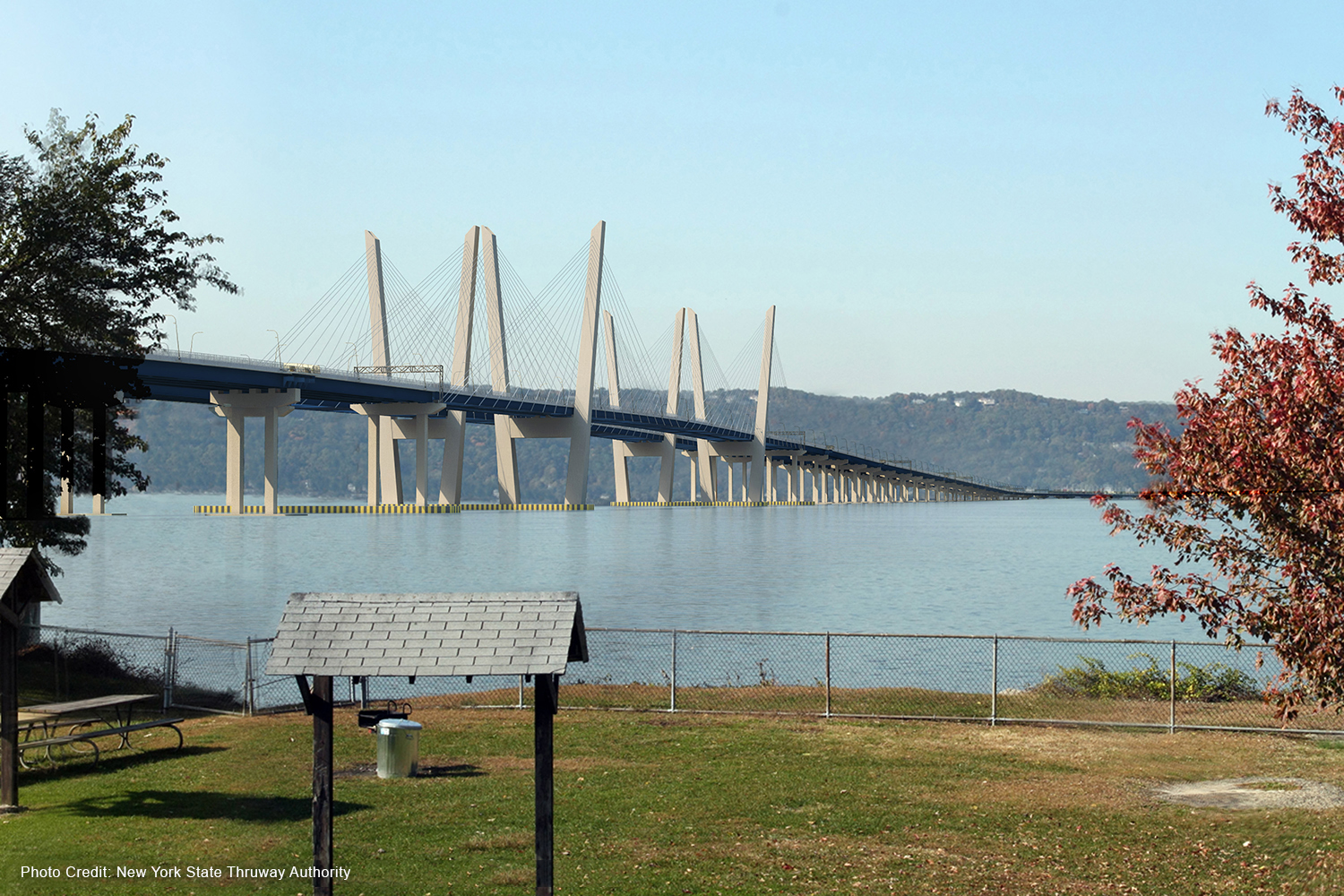 Rendering of New Tappan Zee Hudson River Crossing. Photo credit: New York State Thruway Authority
Today’s award-winning bridge designs, praised for their structural innovations, graceful profiles, sweeping approaches and tautly-arched spans are handsome feats of engineering. They share one limiting feature, however: effectively, they are single-purpose constructions. Besides accommodating high-volume vehicular traffic, few of these connectors perform other real consequential work. They are, in this respect, sub-optimal. Designing for shared use—accommodating multiple vs. single transit modes—offers the opportunities for shared financing and operating savings. Consider the replacement Tappan Zee Bridge, now in construction, a project that just last week was denied badly needed financing by the U.S. Environmental Protection Agency. Had the State acted on commuter preferences, incorporating light rail across this busy Hudson River crossing, instead of postponing that option, it might have a smaller funding gap to fill. 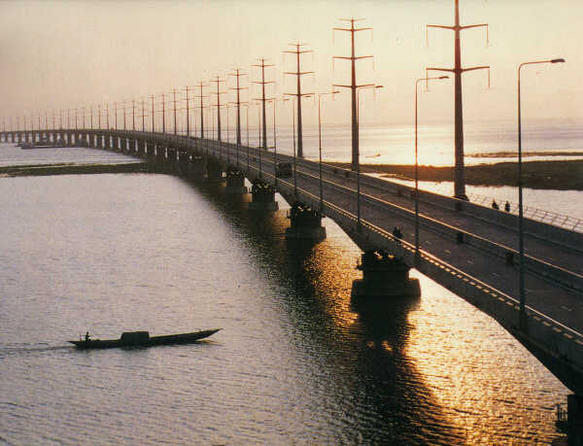 View of Bangabandhu Bridge across the Jamuna River, Bangladesh. Photo by Ragib via Wikimedia Commons, used under Creative Commons licensing.
Successes elsewhere point to the benefits of multimodal crossings. Bangladesh’s Bangabandhu Bridge, for example, a conduit between the eastern and western halves of that nation, is a multipurpose structure that forges a vital link between Southeast Asia and northwestern Europe. It incorporates two-lane carriageways, a dual gauge railway, a high-pressure natural gas pipeline as well as high-voltage and telecommunication cables. These several functions were combined when feasibility studies for each revealed that none were viable independently. 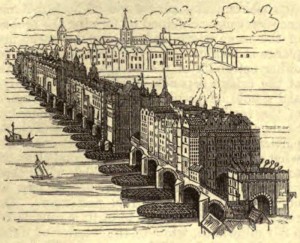 A woodcutting of London Bridge as it would have appeared in 1616. Woodcut published in 1879.
In medieval times, the heavily occupied, multipurpose spans of pre-industrial eras (Old London Bridge and Paris’ Pont Notre-Dame) supported dense, mixed-use real estate, responding to the confines of medieval walled cities. Multi-story houses, shops and civic space topped out these superstructures, bank to bank. Soon, more accretions, utilities such as water-powered mills and water-pumping towers, affixed themselves to these spans. “Future-proofing” infrastructure by adopting more holistic design endeavors runs counter to the traditional siloing of infrastructural sectors. However, common sense dictates that multiuse crossings can not only accommodate more traffic modes, but also they can integrate both useful public amenities (bike and pedestrian ways) and even critical utilities. In an urbanizing world, the diversified use of bridges increases real estate productivity. Importantly, such projects can accrue capital cost savings through shared components and/or economies of scale. Co-benefits also include operational and energy efficiencies and reduced construction-related impacts of noise, traffic disruption and pollution. Sadly, New York State has forfeited these opportunities.
More

Last spring's Presidential appeal for fixing the nation’s “raggedy” infrastructure (his word choice) has failed to stir a response from Congress....

Last spring's Presidential appeal for fixing the nation’s “raggedy” infrastructure (his word choice) has failed to stir a response from Congress. However, bold moves elsewhere to renew these critical services inspire the title of this post. I’m highlighting the following initiatives because they epitomize the new norms needed to “future-proof” our infrastructure. Such stratagems are spelled out in my new book, Next Generation Infrastructure: Principles for Post-Industrial Public Works, just published today. The book explores ways to optimize the collective workings of urban systems: to green our heat and power, leverage natural resources, improve social contexts, and adapt to a changing climate—in all, how to plan a new wave of public works at lower costs and with crosscutting benefits. Close to my own home, one audacious project recently caught my eye. The township of Hempstead, Long Island has erected its very own renewable energy park, featuring wind and solar power, ground-source heating and cooling, electric-vehicle charging, a fuel cell, a net zero energy office, and an aquaculture facility. When networked, all of these components create what my book refers to as an “infrastructural ecology”: co-located services that cost-effectively share flows of energy and resources in a closed-loop system. Here, for example, wind energy splits seawater into oxygen and hydrogen; the latter is used in a hydrogen vehicle fueling station. Hydrogen in turn runs the fuel cell, which produces reliable electricity, as well as warm water to support the shellfish farm. The solar canopy/carport powers the service vehicles and a 60 kilowatt solar field meets all electrical demands at the town’s geothermally heated and cooled office–in all, a terrific ecotourism destination! Infrastructural ecologies demonstrate the first of my book’s five principles for next-gen infrastructure: systems should be multipurpose, interconnected, and synergistic. Another of the book’s precepts is “de-carbonizing” infrastructure. Announced last month, a new project would give a long-abandoned open-pit copper mine in the arid landscape northwest of Tucson, Arizona, and its adjacent waste-rock dump site a high-performance makeover. If permitted by federal energy regulators, this brownfield will be transformed into a 100-megawatt solar plant and a 150-megawatt closed-loop pumped storage facility—think “battery.” In a recycling loop, solar energy will power the pumping of reservoir water held in the pit’s depth to an upper reservoir on the waste-rock site. Here, conventional hydroelectric turbines will churn out reliable power for the grid. Where large-scale solar developments on pristine desert sites have foundered under environmental litigation, the Sacaton Pumped Storage Facility, as a “post-industrial” power plant, can be a model for carbon- and conflict-free “Big Solar.” How might this demonstration project scale up? The U.S. Department of Energy recently reported (PDF) that disturbed and contaminated sites in the U.S. have the potential to produce 715 gigawatts of utility-scale solar power—60% more power than will be required for the U.S. to be adequately supplied with renewable energy in 2050. My book concludes with a road map for state, local, and public-private partners to realize holistic solutions for infrastructure renewal, even without federal leadership. Turning ideas into reality takes money, so this section emphasizes the role that new financing initiatives will play. As a perfect example, this February, New York Governor Andrew Cuomo announced that the New York Green Bank is open for business, with its initial capitalization of $210 million towards it $1 billion goal. Modeled on California’s Infrastructure and Economic Development Bank (also the model for Obama’s proposed National Infrastructure Bank), the NY Green Bank will be the largest in the nation. Its goal is to mobilize financing for credit-worthy “resilient and clean energy systems.” As designed, it will be a self-sustaining model that will add value to public dollars by leveraging private capital. Projects to be supported by the NY Green Bank include a broad range of commercially proven technologies, including solar, wind, and other renewable energy generation technologies; electricity load reduction; on-site clean generation, and similar projects that support the State’s clean energy objectives. The above three initiatives are each promising markers on the road map to rejuvenating America’s critical systems. They inspire hope in me as they suggest we have not lost our capacity for holistic thinking and integrative action.