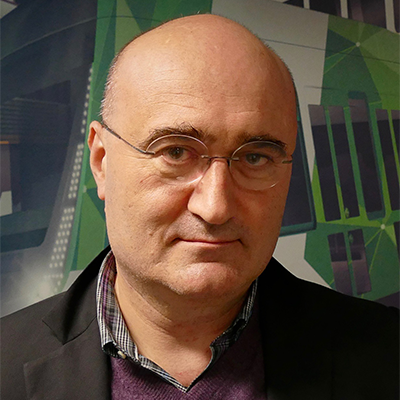 Jarrett Walker has been designing public transit systems for over 20 years.  He is an independent consultant in North America and Principal Consultant with MRCagney in Australia.  He writes the popular transit blog HumanTransit.org.

Public transit consultant and author Jarrett Walker uses the metaphor of the elephant and the wine glass to talk about the things we know are true about space in cities. Interview from The Rail~Volution podcast featuring the plenary conversation...

Public transit consultant and author Jarrett Walker uses the metaphor of the elephant and the wine glass to talk about the things we know are true about space in cities. Interview from The Rail~Volution podcast featuring the plenary conversation at Rail~Volution 2018 in Pittsburgh.

“Transit is an incredibly local thing…If we’re not allowed to talk about it at that local level, we’re never going to make good policy."

Public transit is a powerful tool for addressing a huge range of urban problems, including traffic congestion and economic development as well as climate change. But while many people support transit in the abstract, it’s often hard to channel that support into good transit investments. Part of the problem is that transit debates attract many kinds of experts, who often talk past each other. Ordinary people listen to a little of this and decide that transit is impossible to figure out.

In the latest episode in our series of Urban Resilience Project (URP) podcasts in partnership with Infinite Earth Radio, host Mike Hancox speaks with consulting transit planner Jarrett Walker about how transit can be simple, if we focus first on the underlying geometry that all transit technologies share.

“Transit is an incredibly local thing…If we’re not allowed to talk about it at that local level, we’re never going to make good policy. One of the things I recommend people do is completely tune out any national debate about how much transit we should. Because there is no national answer to that question, there are only local answers.”

Ignore Elon Musk. Let's Focus On Who & What Transit Is For

Instead of talking about Elon Musk, we should be talking about transit: what kind we have, who and what it’s for, and where it’s likely to go in the future.

A Changing Climate Means A Changing Society. The Island Press Urban Resilience Project, Supported By The Kresge Foundation And The JPB Foundation, Is Committed To A Greener, Fairer Future.​ This Article Was Originally Published January 18, 2018 in CityMetric.

Tech tycoon Elon Musk recently declared that public transit “sucks,” and is riddled with serial killers. In the Twitter storms that followed, there was much talk about Musk and his unconventional solutions to the mobility crisis.

We shouldn’t be talking, though, about Elon Musk. Instead, we should be talking about transit: what kind we have, who and what it’s for, and where it’s likely to go in the future.

Buses, however, also account for nearly two-thirds of all transit journeys to work outside New York City. And yet, most of the attention — and the funding — goes not to buses, but to their far more glamorous cousins, light rail and trolleys. And a lot of those projects, like Detroit’s much-heralded Q Line, actually have more to do with promoting redevelopment through real estate investment than with moving people around.

Instead of being defensive about people like Elon Musk, who — as others have pointed out — has absolutely no idea what he’s talking about, we should recognise that public transit in the United States is in serious trouble. For all the hype and the billions in investment, it’s still an exotic taste.

Outside New York City, only 3.5 per cent of work trips (and an even smaller percentage of non-work trips) take place on transit. Transit accounts for 10 per cent or more of work trips in only nine of the nation’s top 60 urban areas, and 10 per cent of total trips only in New York. Despite the fact that transit is heavily subsidised, many of our biggest systems are in poor shape or worse. Deferred maintenance, inadequate capital investment and fiscal woes are taking an increasing toll, as stories from New York, New Jersey, Washington DC and elsewhere over the past year or two have made abundantly clear.

While there is plenty of blame to go around, the most fundamental problem is that, for 60 years or more, we have systematically spread our population around our metro areas — yes, I’m talking about sprawl — in ways that are fundamentally incompatible with efficient, cost-effective mass transit. Many of our older cities have thinned out, while suburbia has spread further afield.

The city of Cleveland, for example, has only 40 per cent of the people it had in 1950, while ever-spreading development has formed a blob spreading 25 or more miles east and south of downtown.

This triggers what transit people call the ‘last mile problem.’ It’s a serious problem, and possibly insoluble by transit, despite a lot of creative thinking. People live — and their jobs are located — in such a dispersed fashion that, outside of high-density central areas, no plausible network of transit lines can get close enough to them to make transit preferable to simply getting in one’s car and driving off. And no, the solution is not getting people to walk more; that might work on a beautiful spring day, but not the rest of the time.

This problem is further complicated by two big developments in transportation: ride-hailing systems like Uber and Lyft, and the imminent arrival of autonomous, self-driving vehicles. Whatever else they may or may not do, these changes have already made it easier for more people to use cars, whether theirs or someone else’s, and will make it even easier in the future. After all, if solving the last mile problem through transit involves taking Uber to the bus, and then another Uber from the bus to the workplace, why not just take one Uber to begin with?

Transit is important, but I think we have to take a step back and ask ourselves why it’s important. Public transit systems serve a variety of different policy agendas, including:

All of these functions are relevant, and important. But they are sometimes in conflict — and even when they’re not, we may not have enough resources to address all of them. If we invest hundreds of millions in light rail systems whose primary role is to foster redevelopment, we will have fewer resources to help people with limited options get to jobs with reasonable efficiency. With the majority of urban residents today working in the suburbs, that’s not an insignificant concern, and in my opinion, should be the highest priority.

We need to start thinking differently about transit. For example, we assume that transit should be a monopoly, run by the MTA in New York, the CTA in Chicago, SEPTA in Philadelphia, and so forth. Yet a monopoly can be a very inefficient way to achieve the many different goals that transit is called upon to serve.

A few years ago in CityLab, Lisa Margonelli pointed out that “America’s 20th largest bus service — hauling 120,000 riders a day — is profitable and also illegal.” She’s talking about the hundreds of what New Yorkers call “dollar vans,” which cater to people and areas inadequately served by public transit.

Most cities have something similar. Most or all are illegal. Why not allow anyone with a properly licensed, insured and inspected van to pick up passengers on street corners and take them where they want to go?

In the end, it’s not about Elon Musk. Indeed, if his words encourage us to think more about what transit is for, and how to achieve those goals — plausibly, not through imaginary tech ‘fixes’ — that would make this entire Twitter spat worthwhile.