Peter Christie is an award-winning science journalist, pet owner, and author who writes frequently about conservation. Peter is a national Science in Society Journalism Award winner (Canada), a 2008 fellow with the U.S.-based Institutes for Journalism and Natural Resources and a recipient of the 2015 Schad Foundation Grant for Conservation Journalism. His stories and features have appeared in The Globe and Mail, Maclean’s, ON Nature (formerly Seasons) magazine, Canadian Geographic, The Ottawa Citizen, The Vancouver Sun, The Edmonton Journal, The Montreal Gazette, The South China Morning Post and a variety of others. His most current book is Unnatural Companions: Rethinking Our Love of Pets in an Age of Wildlife Extinction, which will be published in April 2020. Peter is also the award-winning author of science books for children and young adults. His popular The Curse of Akkad: Climate Upheavals That Rocked Human History and 50 Climate Questions: A Blizzard of Blistering Facts chronicle climate changes through history. Other children’s books, such as Animal Snoops, Naturally Wild Musicians, and Well-schooled Fish and Feathered Bandits explore exciting new research in animal behavior science. Peter is also the author of a field guide book, The Reptiles and Amphibians of Prince Edward County. Peter’s science communication consulting work includes writing, editing and directing communications efforts for national and international conservation and environmental groups and agencies, including the World Wildlife Fund, the Canadian Parks and Wilderness Society, the Royal Society of Canada, the Boreal Songbird Initiative, the Canadian Climate Forum, and many others. Peter has a Master of Science degree from Queen’s University in Kingston and a Master of Journalism degree from Carleton University in Ottawa. He is a member of the Canadian Science Writers’ Association and lives with his wife, a lawyer and academic, and their two daughters in Kingston, Ontario. 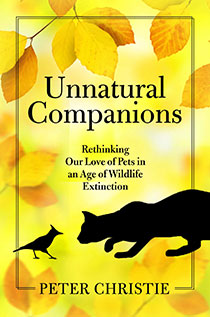