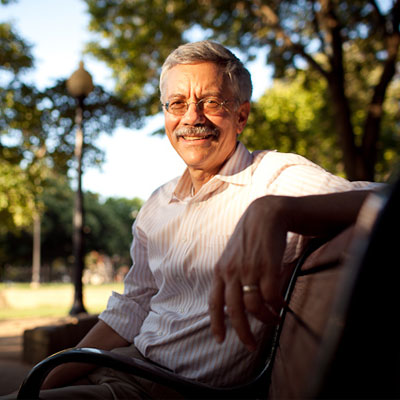 Peter Harnik is the founder of the Center for City Park Excellence at the Trust for Public Land, which he directed until his retirement in 2016. Previous to Urban Green,  he authored Inside City Parks, a book about the park and recreation systems of the 25 largest U.S. cities. He was co-creator of the ParkScore methodology of rating urban park systems across the nation and co-founder of City Parks Alliance. Previous to TPL, he was co-founder of the Rails-to-Trails Conservancy and coordinator of Environmental Action, Inc. He is currently writing a history of the rails-to-trails movement in the United States.

If It Doesn’t Have a Bench, Is It Still a Park?

A Changing Climate Means A Changing Society. The Island Press Urban Resilience Project, Supported By The Kresge Foundation And The JPB Foundation, Is Committed To A Greener, Fairer Future.​This Post Was Originally Published In Parks and Recreation Magazine.

In 2013, the city of Norfolk, Virginia, removed almost 70 benches from three small city parks. The benches weren’t in disrepair and they weren’t in a bad neighborhood. In fact, they were located in the revitalizing historic community of Ghent, and, if anything, were incredibly popular. Unfortunately, it was the wrong kind of popularity. Judged negatively by some neighbors as a milieu for loitering, drinking, fighting and even prostitution, the benches of Stone Park and Stockley and Botetourt Gardens were deemed facilitas non grata.

The decision, made after several years of study, was controversial. Some homeowners near Stockley Gardens say it is now quieter and more peaceful, but one Ghent resident, Bruce Ebert, lamented, “Now, we have a park that’s nice to look at but totally useless.”

When asked if he considered the removal a success, Jason Baines, a park department landscape architect, was cautiously tight-lipped about the painful battle. “The citizens were satisfied,” he said. But, not all of them. In an open letter to the Norfolk City Council, published by local news source AltDaily, Norfolk landscape architect Bill Speidel wrote, “It tells the public that we are not welcome to use that park; that it should be an empty void.” In his letter, he suggested other possible courses of action, such as making simple design modifications to the benches.

Norfolk isn’t alone. In recent years Pittsburgh has taken benches out of Allegheny Commons, Roanoke has removed them from Elmwood Park, and Sarasota has done the same in Selby Five Points Park (although the city is now reconsidering). In New York City, a number of park benches were purposely removed in the 1980s, although that is no longer a standard practice. Philadelphia’s famous Fairmount Park is such a bench-free environment that nearby residents drag portable chairs across busy Parkside Avenue to have a place to sit and automobile visitors can be seen taking folding chairs out of the trunks of their cars.

Other than trees, it’s hard to find something as intrinsic to people’s concept of an urban park. “The bench is really a symbol of parks,” says Mark McHenry, Kansas City parks director. The prominent advocacy organization New Yorkers for Parks even chose a park bench for its logo.

In fact, is a park without benches even a park?

Continue reading the full post on Parks and Recreation.