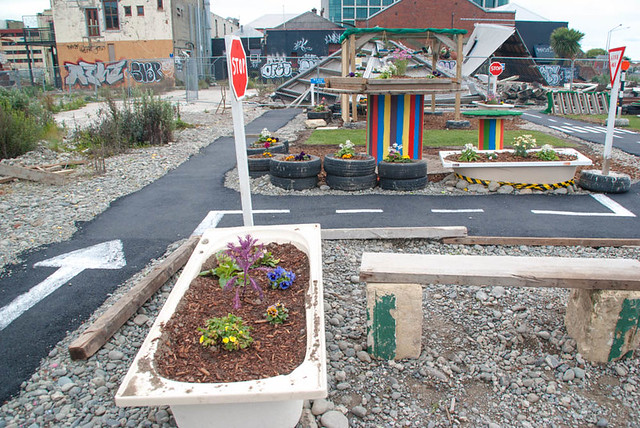 When two major earthquakes hit Christchurch, New Zealand in 2010 and 2011, this coastal city of 400,000 was all but destroyed. What remains—historic facades propped up by shipping containers, buildings crumbling in on themselves, razed blocks covered in well-mowed grass— looks as though multiple post-apocalyptic movie sets were placed side by side.

But, walking around post-disaster Christchurch, it becomes clear that the earthquakes also shook loose a deep reserve of creative talent. Soon after the quakes, activist groups like Gap Filler and Greening the Rubble began developingtemporary projects designed to bring community life, joy, art, and commerce back to the decimated city center.

In this way, Christchurch has become an epicenter of tactical urbanism – a strategy that harnesses the ingenuity and spirit of communities to improve city life. Tactical (also called emergent, adaptive, and user generated) urbanism deploys a broad range of short-term, low-cost, scalable interventions. It is audacious—breaking through the gridlock of planning processes and responding to city-dwellers’ needs in real time. City dwellers around the globe are using these strategies for everything from guerilla wayfinding to pop-up retail and DIY traffic calming. And, as I learned on a recent trip to Christchurch, tactical urbanism really shines in times of crisis.As I toured the city, I got to see the stunningly simple Cardboard Cathedral, built as a temporary replacement for the city’s badly damaged 19th-century cathedral. I lingered in a community gathering space called The Commons, which until recently included the Pallet Pavilion, a venue for live music constructed entirely of wooden shipping pallets. Throughout the city, I encountered community gardens, bike repair kiosks, container markets, streetscape installations—and even a mini-golf course spread out across the rubble. What struck me about these projects was their variety, but also their human scale, use of recycled material, and their “world made by hand” aesthetic.

Developed by artists, organizers, academics, developers, small business owners—and yes, even architects and planners—small-scale projects emerged as the dominant paradigm for remaking the city while the Crown government got its house in order.  Together, these projects proved that social networks could mobilize faster than any government agency (though the city’s local government deserves much credit, for investing in grassroots groups and giving them wide berth.)

What has transpired in Christchurch over the past four years is nothing short of remarkable. These projects have mobilized the ingenuity of the city’s people. They created precedents for open and participatory city planning. And importantly, they helped the city heal by bringing people together—drawing residents and visitors back into the physical and cultural heart of the city.

In this way, tactical urbanism has also made the city more resilient. An emergingbody of literature shows that resilient cities are characterized by innovation, participatory governance, and strong social ties—all of which are celebrated and strengthened by tactical urbanism.

Today, as Christchurch begins to rebuild in earnest, the fate of its quirky, post-disaster projects remains unclear. The City and the Crown-appointed rebuilding authority (CERA) are moving forward on a recently completed master plan. Dollars—big dollars—are flowing into the city, as evidenced by the half dozen cranes and roadwork projects seen around nearly every corner. While the cranes and construction crews are a welcome sight in this battered city, let’s hope they don’t signal a return to the status quo ante. In the wake of disaster, the people of Christchurch mustered great creativity and solidarity—building their own resilience and that of their city. In a century that promises many shocks and surprises—from extreme weather events to financial crises and terrorism—that resilience will serve them well. And we have much to learn from their response to an extraordinary challenge.

Perhaps the work they accomplished has served its initial purpose, as an effective transition between what was and what will be. But maybe, just maybe, the upstart energy of tactical urbanism can be married to well-considered financial capital, and something altogether transformative will emerge and be sustained. We’re all watching.

Mike Lydon is Principal of The Street Plans Collaborative. An internationally recognized planner, he was a co-author of The Smart Growth Manual and the creator and primary author of the reports The Open Streets Project and Tactical Urbanism: Short-term Action, Long-Term Change? Vol.1 and Vol.2. He works and speaks internationally on smart growth, livable cities, active transportation, and tactical urbanism. He lives in Brooklyn, NY.