Skip to main content
Home   /   Blog   /   And Winter Broke
In March I participated in a University of Nebraska literary retreat at the Platte River Whooping Crane Maintenance Trust. It was the climax of spring migration on the river, where sandhill cranes pause to feed during their 5,000 mile journey from Mexico to as far as Siberia. I spent my time there ensconced in a primitive blind with several eminent poets, bearing witness to the cranes' sempiternal return. Fossil evidence suggests that cranes have been stopping at this place on their journey north for the past 10 million years. Rough windows cut into the blind overlooked the river and vouchsafed us a view of the cranes as they came down to roost on the silvery Platte at dusk and left to forage at dawn. If we spoke at all, we did so in whispers and gestures, overcome by this primal spectacle, this coming together of legions of cranes into a great council of beings. 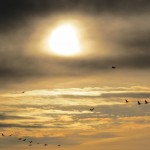 Cranes need grasslands, wetlands, and open space. They prefer shallow, broad water for roosting; the Platte River, an inch deep and a mile wide, offers ideal habitat. Accordingly, each spring hundreds of thousands of sandhill cranes and a handful of whooping cranes, spend three weeks in a sixty-mile reach of the Platte. Their annual return is one of the most heartening conservation stories. While I was in Nebraska winter broke, with crusty snow carried downstream by the river and cranes on the wing filling the air with their clarion calls in the gloaming. I watched bright runes of cranes parachute in against the strong prairie wind after a day spent foraging in nearby farm fields. With sun-gilded breasts, cupped wings, humped backs, and dangling legs they streamed earthward to join their roosting comrades. Their bodies darkened the sky as far as I could see as they streamed in endlessly. In the 1920s, Aldo Leopold found only five breeding pairs of sandhill cranes and five whooping cranes remaining. This inspired him to write "Marshland Elegy," in A Sand County Almanac at a time when there was little hope for their survival. Cranes declined due to over-hunting and habitat loss. Today more than 700,000 sandhill and 280 whooping cranes exist. Legislation (the 1900 Lacey and 1918 Migratory Bird Treaty Acts) helped enable their recovery. In the 1920s, the National Refuge System began to conserve migration and nesting habitat. But it would take decades of wetland restoration and outreach to bring cranes back. Smudgy contours of landforms lay soft against glowing skies as the light gently faded at dusk. Cottonwoods and river and cranes ribboned horizontally. This landscape and these cranes had shaped each other over eons. My senses filled with the sounds of cranes calling, purring, growling, their songs at once strident and gentle. I sat yearning to understand this vast hegira-the same way that humans over the ages must have sat here witnessing the lessons and truths this great migration holds. This time in this place was about trust: that the future will be better than the near past; that we will reweave the web of life by bringing back species from the brink of extinction. As dawn broke the next day we discerned among the 100,000 dun sandhill bodies pressed together on the riverbank a blaze of white-a lone whooping crane. Head and shoulders above the others, this great white hope of a bird moved regally amid all the flapping, clamoring sandhills. As it fed it periodically flared its enormous black-tipped wings, and gave loud whooping calls that stood out above the sandhill clamor. Long after all the sandhill legions had spiraled skyward, the whooping crane remained. ________ Cristina Eisenberg is a conservation biologist at Oregon State University, College of Forestry, and Boone and Crockett Fellow who studies how wolves affect forest ecosystems throughout the West.
conservationists
biodiversity
birds
environment
green
migration
nature