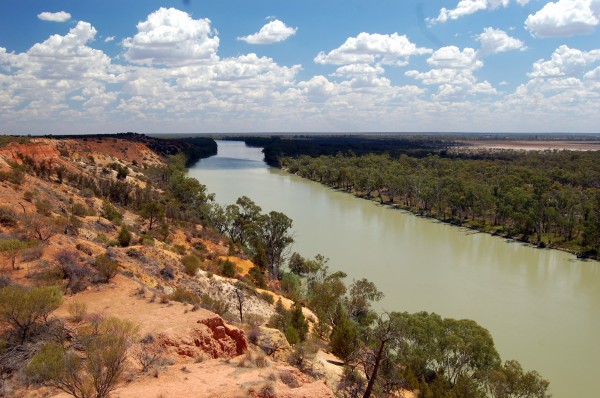 The Murray River near Renmark, Australia. (Photograph by Brian Richter)
Originally posted at National Geographic's Water Currents blog With water crises erupting in California, Texas, and the Colorado River Basin, state water managers throughout the western U.S. and our federal government could take some valuable lessons from the impressive progress made in Australia over the past decade. The Aussies have taken some giant leaps forward in their efforts to avert water shortages in their largest river basin—the Murray-Darling.

Most notably, the Aussies realized decades ago that over-allocation of water rights in the Murray-Darling Basin was damaging both to the environment and to their economy. The Murray-Darling Basin is Australia’s food basket, providing nearly 40% of the country’s agricultural production. Most of the country’s fruits and vegetables, as well as dairy products, beef, lamb, and wine, are produced using Murray-Darling water. When farmers don’t get the water they need, everybody suffers. But when too many straws are drawing from the rivers, you can be certain that when dry times come, many will be sucking air. During a devastating “Millennium Drought” in 1997-2009, river flows throughout the basin were only 40-60% of average. Many farmers received no water allocations whatsoever for three years. Dairy production fell by 14 percent, cotton fell by a fourth, meat by half, and rice farming stopped almost entirely. Realizing that setting a maximum limit on water use is essential to everyone’s water and food security, the Aussies in 1997 adopted “The Cap.” This limit on total water use—which was further institutionalized in a comprehensive Basin Plan adopted in 2012—recognized that water rights needed to be reduced by about a third if the country was going to avoid another economic and environmental disaster.