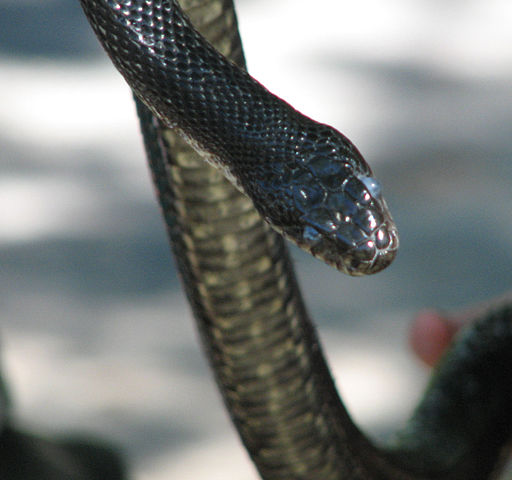 Eastern rat snakes have a bad reputation. Photo by D. Gordon E. Robertson, used under Creative Commons licensing.
Originally published by Village News, a publication of the community of Cabin John, MD. In one respect, the Eastern rat snake is the great white shark of the Potomac River’s towpath. Just as the sheer thought of the marine predator keeps swimmers out of the water, the sight of an Eastern rat snake diverts many strollers from a riverside walk from May until autumn. There is one major difference: you are a million times more likely to encounter on the towpath an Eastern rat snake, one of the most common reptiles in our woods, than a great white along the Maryland coastline. In fact, the global population of the great white shark, put at less than 3,500 for this ocean-going predator, is likely less than the number of wild tigers in all of Asia’s forests. The native Eastern rat snake looks ominous with its black skin and near six-foot span. It poses no threat to humans, however, and is a skilled hunter of small mammals such as mice and rodents. Harmless or not, the mere sight of one sends many walkers the other way. Why is that? Why do humans fear snakes, spiders, and scorpions more than modern day concerns like nuclear fallout or climate change? One answer is suggested in an intriguing book, entitled Sunrises, Serpents, and Shakespeare, by Gordon Orians. His central theme is that the emotional make-up of modern humans has been strongly influenced by evolution through natural selection during our ancestors’ early days in the African savannas. Back then, constrictor snakes like pythons—which catch and crush their prey before swallowing them—and venomous snakes like cobras and vipers posed significant mortal threats and so our ancestors who were able to quickly recognize and avoid them left more offspring who survived than those early uprights who tread on or too close to a deadly serpent. Our evolved ability to recognize snakes in the wild and attendant fear at their sight, has served humans well, and thus we maintained this vigilance—even a genetically predisposed ability to detect the flecked scale patterns of many poisonous varieties—as well as, in our conscious minds, a deep anxiety about them. In the Indian subcontinent, this cautious response is appropriate, as more than 50,000 people die each year from venomous snakebites. Some public health officials even wonder why more tropical medical research is not directed to producing more anti-venoms to address this prime health hazard. People strongly dislike snakes of any kind typically, but they don’t like rats much either. Imagine the reaction a Cabin John homeowner has to a single rat scurrying out of the garbage can. Now what if you drove onto your yard at night and the headlights illuminated hundreds of rats on the front lawn? All of a sudden, having natural predators around like the Eastern rat snake appears in a whole new light. They offer as valuable a community service as our local exterminator provides (a shout-out to Mr. Bugs!), and the rat snake works for free. Eastern rat snakes range south to the tip of Florida and occur in the Everglades. It is in this magnificent ecosystem that a new chapter is being written that will soon find its way into the ecology textbooks. Floridians tired of their pet pythons, Burmese or otherwise, have released them into the swamps of south Florida, where they have proliferated (no chance of them moving north to the Potomac because they cannot survive frost). According to local ecologists, there may already be thousands of pythons in the Everglades, so numerous that it is now virtually impossible to eradicate this large constrictor. Consequently, bobcats, raccoons, and other middle-sized predatory mammals have all but disappeared. Sometimes, when invasives take over, we see the runaway ecological change in the composition of an ecosystem rather than the checks and balances of one population keeping another at bay but not eliminating it. Snakes have an outsized effect on the human psyche and a profound one on wild nature, and sometimes both. I was bicycling home to Cabin John along the towpath from D.C. recently, thinking about how common rat snakes had been this year along the Potomac when I had to come to a screeching halt near Lock 6. Lying perpendicular to the trail was a nonchalant Eastern rat snake. I waited patiently and then finally told it to check out the August issue of the Cabin John News and in the meantime to please slither to the side of the towpath. The snake obliged and continued its hunt for smaller mammals than me.
biodiversity
ecology
evolution
invasive species
pests
reptiles
sharks
wildlife