Skip to main content
Home   /   Blog   /   Building Natural Systems in Seaside Cities
Editor’s note: Richard Burroughs will be participating in a webinar with the Security and Sustainability Forum this afternoon. Registration is free. Burroughs will be talking with Timothy Beatley about connections between oceans and cities. September 24 update: The full webinar is now available for viewing. 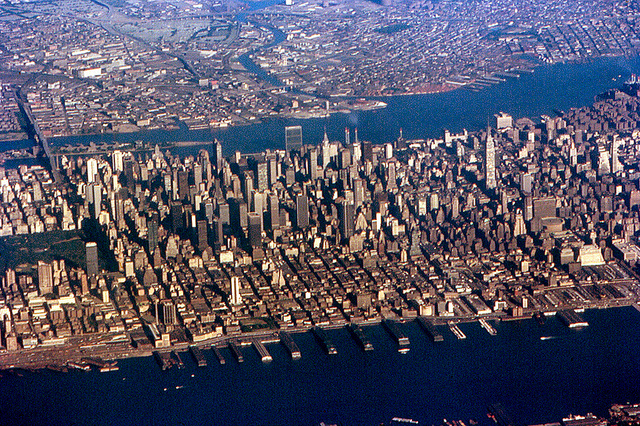 Midtown Manhattan from the air shows how closely coastal cities and the ocean must work together. Photo by Roger Wollstadt, used under Creative Commons licensing.
How do citizens organize and manage themselves and their societies to occupy and benefit from the coast? What organization should take on this task? Are there good rules for coordinating coasts and people? Since most of the world’s 20 largest cities are located on the coast and the five largest cities in the US are on the coast or the Great Lakes, urban settings have large and increasing leverage on coastal management. In fact, no discussion of city governance is complete without full acknowledgement of coastal environments; conversely, coastal management without explicit consideration of cities will fail. By fortunate happenstance cities are well suited to this task. The density of urban development and activity may be mapped, so definition of place, a key element, is clear. Coastal cities are nested in larger regions, which include the watershed landward and the adjacent coastal waters, often out to the shelf break. In addition, a growing body of work on footprints connects the city to water, food, energy, and other resources necessary for a functioning city that are quite remote from immediate land and seascape. To survive, cities must have effective organizational structures. Collectively they have great influence on the direction of society. And influence is the key. Governance systems shape individual behavior to promote a shared future. Treatises exist on the tools of governance, and while laws and regulations are the bedrock of the system, other approaches can work as well. In fact cities offer the opportunity to be at the vanguard of constructive change. Urban residents can set new directions for habitation of the coast by directing buying practices to specific ends or through acting in concert to promote certain futures for the whole society. In short, concentrations of power in cities can be directed to change the course of society and its engagement with the coasts. Just one segment of this complex mosaic illustrates the governance challenges and opportunities that cities hold. Actions that citizens, an individual city, or groups of cities can take  change the relationships that extend beyond the city boundary. The C40 group, a collaboration among 69 cities around the globe, includes one out of every 12 individuals in the world and 18% of global GDP. This group has firmly embraced actions to reduce climate change and hence sea level rise, a promise that can be of great benefit to all coastal cities. C40 demonstrates that cities can organize and advocate for carbon emission reductions in distinctive ways apart from central governments. What would be the powers of C40 or a similar organization, if other topics in coastal governance were a part of a city-driven agenda? The two examples that follow illustrate how this might proceed. 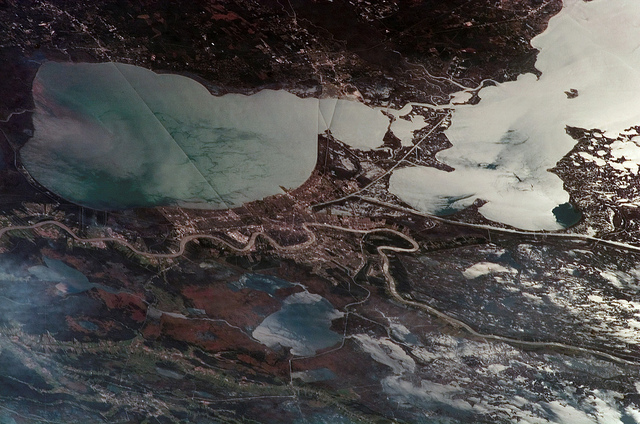 A 2006 view of New Orleans from space shows the Gulf to the south, Lake Pontchartrain to the north, and the city in tenuous balance. Photo by NASA, used under Creative Commons licensing.
New Orleans, Louisiana, tests the engagement between coast and city like no other location in the US. The gateway to the vast, rich lands of the Louisiana Purchase expanded gloriously through the steamboat era, imports oil, and exports grain. Commerce drove the original location of the city. As  New Orleans expanded, a combination of building around half of it below sea level and relying on engineering works to protect it from the river and the sea became the primary artifacts of an attempt at dominating nature. Since relative sea level has historically risen three feet a century in the delta, warning bells have been ringing about the precariousness of this situation. When Hurricane Katrina struck, the levee failures and over 1500 deaths made the realities clear even to the doubters. But what is a solution that New Orleans has adopted and other cities might consider? The navigational “improvement” of cutting the Mississippi River Gulf Outlet (MRGO) through wetlands provided a more direct route not only for ships from the city to the sea, but also for a portion of Katrina’s storm surge to reach the city. Restoring the marsh to more effectively buffer the city from the sea has proceeded by first blocking MRGO and more recently beginning to restore wetlands in the area. A myriad of nature’s services rings and increasingly penetrates cities. Insights about the role of marshes, oyster reefs, longshore bars, and other coastal features could well be the basis for effective action to promote nature and the city in appropriate settings. 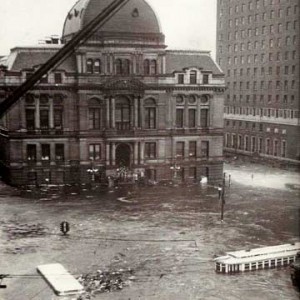 A 1938 photograph of flooding in downtown Providence during a hurricane. Photo via the Providence Public Library, used under Creative Commons licensing.
Providence, Rhode Island, where I serve on the Narragansett Bay Commission, faces a water quality management issue that firmly ties urban lands and coastal waters together. Like most other cities in the Northeast, Providence combines street drainage with sanitary and industrial waste in one pipe. During heavy rains the sewer system and treatment plant can’t process all the water, so relief points or overflows direct the flow to adjacent rivers and estuaries. Pathogenic organisms from human waste as well as other contaminants degrade water quality in the adjacent bay, limiting swimming, shellfishing, and other uses. While water quality is important, cities must also live within their means. This forces important choices. Providence is investing over half a billion dollars in a tunnel under the city to store much of the flow that would have been released in the past. After the storm passes, the collected water is pumped up to the plant and treated. However, some believe that much more should be done, at least doubling the cost of the project by creating a second tunnel system. The residential sewerage rate has more than doubled in over a decade and will continue upward rapidly if the second tunnel is built. To what extent can green infrastructure deliver water quality at lower cost? Reducing the flow from streets, roofs, and other hard surfaces to the collection system through green infrastructure has catalyzed discussions among planners, engineers, environmentalists, and citizens in Providence. Green infrastructure includes rain barrels, curb bump outs, trees, and a variety of other approaches to retaining and recycling water in the city before it reaches the collection system’s pipes. If flow were limited, then size and cost of the gray infrastructure could be reduced and the rate of increase of sewage bills could be curtailed. Philadelphia leads the way with this approach in the Northeast. Adding natural elements to the city landscape that are both proven and accepted will aid seaside cities in governing the land effectively and, in so doing, easing  pressures on adjacent seas. The different steps employed and considered by the C40, New Orleans, and Providence show how cities can and do take the lead. Expansion of their roles into other areas of coastal governance will serve the nation well.
cities
coastal development
engineering
infrastructure
oceans
planning
urbanism

Richard Burroughs teaches in the School of Forestry and Environmental Studies at Yale and in the Department of Marine Affairs at the University of Rhode Island, studying how societies govern themselves in coastal lands and seas. He is the author of Coastal Governance