Skip to main content
Home   /   Blog   /   Calculating How Fast Trees and Forests Grow
That might sound like a rather dry, technological subject, but it is, obviously, quite important in relation to wood production from forests. It’s also important to be able to calculate tree growth rates so we can estimate how fast forests can absorb carbon dioxide from the atmosphere and store it as carbon. Professional forestry organizations and forestry departments in universities carry out all sorts of research aimed at increasing our understanding of how forests function and respond to events such as fires or insect attacks or management actions such as thinning or clear-cutting. A great deal of effort over many years, has gone into the development of biometric models to estimate wood yields and forest growth rates. These models are developed by statistical analysis of repeated and systematic measurements of tree sizes in forest stands. They do not, in most cases, depend on, or incorporate, knowledge about the physiology of trees. Consequently, they have quite serious limitations: for example they can’t be used to estimate the effects of changing conditions on tree growth—including changes in climate. Biometric models are also specific to the areas for which they were developed. Nevertheless, they have served foresters well. Back in the 1970s, I was in England doing research on the way weather and climate affected trees and influenced their growth. My focus was on the physiology of trees—on the way they absorb carbon dioxide for photosynthesis, and lose water through the tiny pores on leaf surfaces, called stomata. Stomata control the rates of carbon dioxide absorption and of water loss—called transpiration—of most plants. I was interested in the influence of weather on these processes, which included studies on the physical interactions between the foliage of trees and environmental factors like sunshine, wind, and atmospheric humidity. These relationships were becoming known as ecophysiology. Dick Waring at Oregon State University was concerned with the same processes in the forests of the Pacific Northwest, with particular emphasis on the water relations of trees—the way water moves through them and how they interact with soil and atmospheric conditions. We met in 1973 and have been friends as well as professional colleagues ever since. At that time neither of us was involved with the practical aspects of forest management, although Dick knew more about that than I did: he had a real forestry degree. In 1981 I was appointed to be the director (called the Chief) of the largest forest research group in Australia—the Division of Forest Research of the CSIRO, the Commonwealth Scientific and Industrial Research Organisation—[Editor's note: Kind of like the NSF]. The job involved interactions with state forest services and a considerable amount of politics. Forests in Australia are managed by the state. Unlike in the US, there are no national forests: there are national parks (which, slightly confusingly, are also the responsibility of the states) and there are state forests. There is no overarching organization like the US Forest Service. Research in forests was done by the state forest services, a few people in universities, and my division. 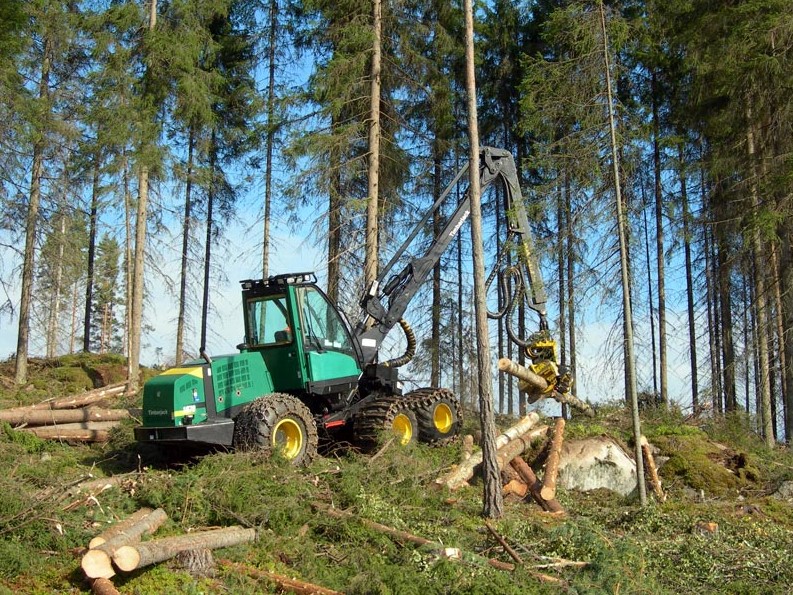 A harvester (Timberjack 1070D) working in a forest in Finland. (Photo: Heikki Valve. Transferred from fi.wikipedia.org, used under Creative Commons licensing).
The industry was, until recently, strongly based on logging native eucalyptus (hardwood) forests. Softwood production was from plantations—mostly Pinus radiata, also known as Monterey pine because it came originally from the Monterey Peninsula in California. The mandate of the state services had always been to ensure that supplies of timber were adequate for economic purposes, so the research they supported was almost entirely practically oriented. They carried out lots of field measurements on trees to provide the data needed for growth and yield models. I had the strongly-held view that the job of my division was to do research to understand the processes controlling tree growth, with the idea of building that understanding into the models. But the foresters and forest managers in the states and companies found it difficult to see how knowledge about tree physiology would help achieve their immediate practical aims, so we had our disagreements. Skepticism about the value of physiological knowledge wasn’t confined to Australia’s forest industries; it was widespread in the US and elsewhere, but I went ahead and pushed the ecophysiology research. We developed our process-based model, but didn’t get it to the point where it could be used as a practical tool. In 1996 I was no longer a divisional chief, but had the opportunity to bring Dick Waring to Australia to work with me. A great deal of progress had been made and Steve Running, at Montana, had pioneered the development of a process-based model of forest growth with the potential for practical application. Dick and I worked on a new model, which we called 3-PG: Physiological Processes Predicting Growth. 3-PG is what’s called a hybrid model—a combination of process-based and empirical models. It makes use of the data available from conventional field measurements. We published it in 1997. The flow diagram in the figure below provides an outline of how the model works. 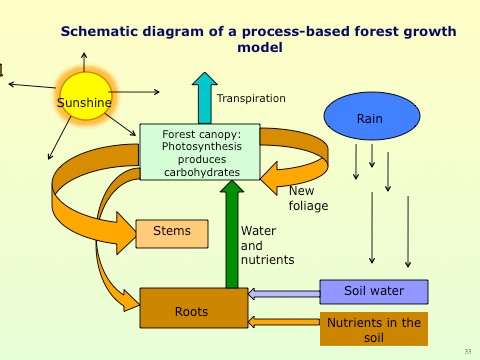 Simplified diagram of a process-based model of forest growth. Sunshine drives photosynthesis. To function well, leaves need water and nutrients from the soil. The (carbon) products of photosynthesis are distributed to the various parts of the trees. Water is lost by transpiration.
3-PG is essentially a model describing the growth of plantations, or any relatively simple tree system—although it has also been used to estimate the productivity of a wide range of forests, including highly diverse tropical forests. Soil characteristics and monthly weather data provide the inputs. Its process-based understanding and predictive power allow forest managers to use the model to estimate future yields and evaluate questions like the extent to which fertilizer is likely to increase those yields, or whether thinning will reduce water stress, and (where relevant) the likelihood of bark beetle attacks. It’s also possible to use it to estimate the likely effects of specified changes in the climate. In a slightly modified form, 3-PG can also be run with information on canopy density derived from satellite-mounted instruments. This application, Dick’s particular area of interest, has provided the basis for a number of valuable wide-scale analyses of forest growth. The model has been, and is being, used in a number of countries, notably in South America, where it has been quite widely adopted as a management tool for the enormous plantation estates (mainly eucalyptus) there. It has been evaluated and used in the United States, in Canada, South Africa, China, a half dozen countries in Europe and, of course, Australia, although we have to admit that the “take up” in Australia remains limited. Foresters are coming round to the idea that this sort of model must be the way of the future. The 3-PG model is not the  final answer, but it’s a good start. Modified and improved models of this type are essential, and will increasingly provide the means by which more and more science is injected into management and decision-making in relation to forests. In our new book, Dick Waring and I have tried to set out, in clear and simple language, the basic precepts of forest ecology and tree physiology. We discuss the ecosystem services that forests provide, present economic concepts important for the management and policy decisions that affect forests, and introduce the use of the growth and yield models and remote sensing technology that provide the data underlying these decisions. Our intention was to write something that will contribute to increasing awareness of the science behind forestry—a book that might appeal to anyone interested in forests.
carbon
forests
models
pacific northwest
science
trees
weather