Skip to main content
Home   /   Blog   /   Called to Ecological Restoration
Editor's note: The below is excerpted with permission from a West Virginia University commencement speech given by Keith Bowers, president of Biohabitats. The full speech is well worth a read. 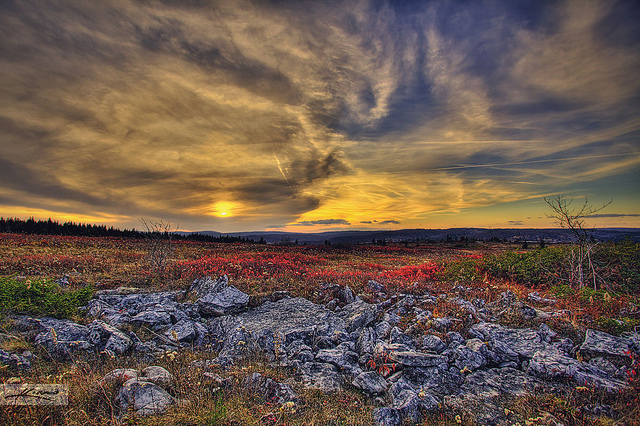 Dolly Sods Wilderness in West Virginia. Photo by Kim Seng, used under Creative Commons licensing.
Now, one great thing about WVU is its close proximity to so many outdoor activities and the opportunity they provide to connect with nature. Cheat Lake, Seneca Rocks, New River Gorge, Dolly Sods, and on and on. I am sure all of you have had some great experiences in many of these places, some adventurous, some maybe a bit more contemplative—-and others that you would rather not share with your parents. As I slogged my way through the landscape architecture program at WVU, I was continually drawn toward the natural world in all of these great places (and some I didn’t share with my parents either). I became increasingly curious about how nature worked, and more importantly, how to put it back together again when it was broken. Fortunately, in the summer between my junior and senior years, I came across a company on the Eastern Shore of Maryland that was pioneering the science–and art–of tidal wetland restoration. Like the Cuyahoga River catching on fire, many of our natural habitats are simply disappearing from the landscape. We have witnessed a precipitous decline in wetlands throughout the United States,—with over half of our original wetlands in the lower 48 drained or converted to other uses. Except for the groundbreaking work associated with the restoration of the Curtis Prairie under the direction of Aldo Leopold in the late 1930’s…(which, by the way, is at the Longenecker Arboretum at the University of Wisconsin–named after William Longenecker, the father of recently retired WVU Landscape Architecture professor George Longenecker; a great connection back to WVU.) …when I was in college only a handful of people had been engaged in what we now know as ecological restoration. Up until then, the primary means by which people participated in the environmental movement was to give money to a conservation organization that bought and protected land. But I discovered Dr. Edgar Garbicsh, once a professor from the University of Michigan, who took a sabbatical in the early 1970s, moved to St. Michaels, Maryland, and began tinkering with salt marshes. He started by propagating and growing marsh grasses. Then he set out to learn about how marshes function. And finally he developed– through much on-the-ground trial and error–techniques to restore and revegetate tidal marshes up and down the Eastern seaboard. Today, tens of thousands of acres of marsh are restored each year thanks to Dr. Garbicsh’s tenacity, determination and vision of 40-some years ago. For me, all I could think about at the time was, “How cool was this!!!” Someone was getting paid to be on the water all day, whizzing around in an airboat, planting marsh grasses and getting a tan. Now that was for me. Little did I know that most days consisted of swatting away merciless mosquitoes, horse flies, and no-see-ums. Fighting off stinging nettles and sunburns. Getting stuck in the mud up to my chest and having to be rescued by ropes and winches out of the thick oozing muck. Watching my unmoored boat drift haplessly into a shipping lane in Baltimore Harbor. And if all of that were not enough, after an exhausting day of planting thousands of plugs of marsh grass, returning the next morning to find that all of the plants had been unceremoniously yanked from the ground and devoured by flocks of hungry geese during the night. Not as glamorous as I thought. Even so, I was sold. And more importantly, I had a mentor. I started looking into this field called ecological restoration. It seemed obvious to me that people had a role in helping to restore ecological systems that had become damaged, degraded and destroyed. I also discovered that even though the field was in its infancy, it most likely required training in ecology, geomorphology, and a whole array of ‘ologies’ that would take me years to learn, not to mention that if I was going to be successful at this, I probably needed a good grounding in business. None of which I had. I was about to graduate, so it was too late for me to begin taking electives in these disciplines. I finished out my undergraduate and without thinking of graduate school, immediately–and somewhat naively–started Biohabitats, an ecological restoration company. This makes it sound like I knew exactly what I was doing. But it didn’t feel like it at the time. Many of you may still be looking for that job that grabs you; maybe you have an idea you’d like to pursue. Now is the time, but don’t expect it to be easy. When my business partner left because he was tired of a shoe-string budget and living with his parents (so was I actually–and so were my parents), it certainly didn’t feel like I was implementing a grand plan. What I did have was a vision, or at least an inkling of a vision. Unlike many of my friends, this vision was not about making a lot of money, or even being employed. Although I didn’t think about it in these terms at the time, looking back I now see that the vision I was beginning to articulate was about something much bigger, fairly audacious, and certainly outside of myself – Restore the Earth and Inspire Ecological Stewardship. Many people (including my parents) weren’t so sure there was a market, or even a need for restoration. It turned out that having that vision–a vision that transcended an immediate desire to make a living, turned out to be even more powerful and fulfilling than I could have imagined. I would wish the same for each of you. Having a vision is more powerful in that it not only keeps me focused on a bigger purpose, but more importantly it resonates with so many people. It is something that all of us can participate in and make a real difference. And it transcends generations and cultures. 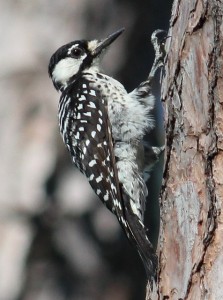 A red-cockaded woodpecker. Photo by Tom Benson, used under Creative Commons licensing.
Knowing that my actions have helped conserve valuable habitat for endangered species, such as the red cockaded woodpecker, or helped restore a vast swath of eastern deciduous forest, or helped inspire the City of Baltimore to make their Inner Harbor swimmable and fishable by the year 2020, is extremely gratifying. As is knowing that these projects have supported the livelihoods of hundreds if not thousands of people around the globe. A vision doesn’t necessarily tell you what to do today; it only tells you where you want to be in 5, 10 or say even 32 years from now. There were a thousand decisions along the way, and half the time I felt like I was making them without any plan at all. When you are in the early days of something, it doesn’t always feel like the beginning of anything–certainly not your life’s work. Often it is only by looking back that all of those daily choices fall into place and start to make more sense than they did at the time. Over the years, it has become more clear to me that the glue that holds a vision together, that steers those thousands of choices toward a higher purpose, is passion. I – am – fortunate. I didn’t just find a job. I didn’t just find a career. I found a calling. I fell in love with the idea of restoring the earth and inspiring ecological stewardship. While it can be exhausting at times, it ignites me, it motivates me, it invigorates me, and most of all, it’s an absolute blast! Some of you may have already found your calling, others not quite yet. That’s okay. Put trust in something you are passionate about doing and don’t let up. And dare to dream big. Come up with a vision with a higher purpose. Combine vision with your passion and nothing can stop you. Don’t be afraid to use it and don’t be afraid to take the lead. And when you do, be prepared. Be prepared to jump in full force, to stay true to your values and purpose, and to practice humility. Remember, ‘Vision without action is a dream; action without vision is a nightmare.’ That’s courtesy of an Honest Tea bottle cap, often my source of profound inspiration. Perhaps even more inspiring are the words of Wendell Berry, the great American novelist, poet, environmental activist, cultural critic, and farmer, in what I believe is one of his best activist pieces: Manifesto: The Mad Farmer Liberation Front. Barry urges us to: Ask the questions that have no answers. Invest in the millennium. Plant sequoias. Say that your main crop is the forest that you did not plant, that you will not live to harvest. — Say that the leaves are harvested when they have rotted into the mold. — Call that profit. Prophesy such returns. Put your faith in the two inches of humus that will build under the trees every thousand years. —- I urge each of you to seek out and embrace diversity. Refocus from “What’s in it for me?” to “What’s best for the common good?” Be the change agent. Dare to think big and love what you do. Go from being the best in the world to being the best for the world.
education
landscape architecture
restoration