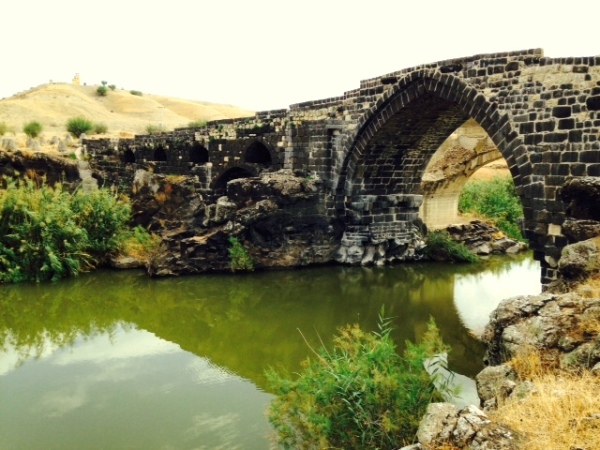 Roman bridge over the Jordan River, which forms the boundary between Israel and Jordan.
Reposted from the National Geographic Water Currents blog with permission The Jordan River of the Middle East has supported a long succession of empires and other human settlements for more than 8,000 years, but it took less than one generation of modern civilization to reduce the river to a trickle of sewage. Now, the ultra-modern technology of “desalination”—turning ocean water into fresh water—may provide the best hope for bringing the river back to life. At least that appeared to be the implicit consensus I heard last week from the more than 400 Israeli and Jordanian water experts and interested stakeholders gathered in a kibbutz just downstream of the Sea of Galilee, in the Jordan River’s watershed. While the river forms an international boundary that divides their countries, the river’s advocates have come to realize that only by working together can they hope to bring the river back to some semblance of the sacred blue ribbon in the desert that once sustained Egyptian, Hittite, Assyrian, Israelite, Babylonian, Persian, Greek, Roman, Arab and Ottoman empires.

The once-mighty yet still-holy Jordan River has lost more than 90% of its natural water flow to thirsty farms and cities. The trickle of water still flowing down the lower Jordan channel into the Dead Sea today is a fetid brew comprised mainly of raw sewage, fish pond waste, and agricultural runoff. It seems an ungodly fate for a river immortalized in the holy books of Judaism, Christianity, and Islam, whose stories tell of the places where Jesus was baptized, four companions of the Prophet Mohammed were buried, and where Moses looked out onto the Promised Land. Sadly, the primary river site in use today for baptizing more than a half million Christian pilgrims each year is located some 200 river kilometers upstream from where John the Baptist is believed to have baptized Jesus, due to two unfortunate realities: the biblical site is situated in a no-man’s land along the international border that is largely off-limits to all but the military, and immersion in the filthy river that now exists at the biblical site might leave a pilgrim relieved of sin but newly burdened with river-borne diseases. The river’s flow had been only lightly depleted until 1964, when Israel completed its 130-kilometer-long National Water Carrier, a canal and pipeline system that removes water at the Sea of Galilee and delivers it to Tel Aviv and other cities, power plants and industries along the country’s Mediterranean coastline and to irrigated farms extending as far south as the Negev Desert. From 1969-2008, the NWC diverted an average of 329 million cubic meters (MCM) of water from the Jordan each year, amounting to more than a quarter of the river’s total flow. As the Israelis were building the National Water Carrier, Jordan was constructing a large water diversion of its own, the King Abdullah Canal, completed in 1966. The 110-km King Abdullah Canal takes an estimated 140 MCM of water from the Yarmouk River, the Jordan’s largest tributary, to supply the capital of Amman as well as farms in the southern Jordan River valley. Because Syria withdraws virtually all of the remaining water available in the Yarmouk, this tributary no longer contributes much water flow to the Jordan River. By the time the withered Jordan River reaches the Dead Sea, only a paltry fraction of its original water flow remains. With greatly-reduced inflow from the Jordan River and with huge losses to evaporation, the water level of the Dead Sea—the lowest and one of the hottest places on Earth, currently at 427 meters below sea level—has been dropping by a meter each year. 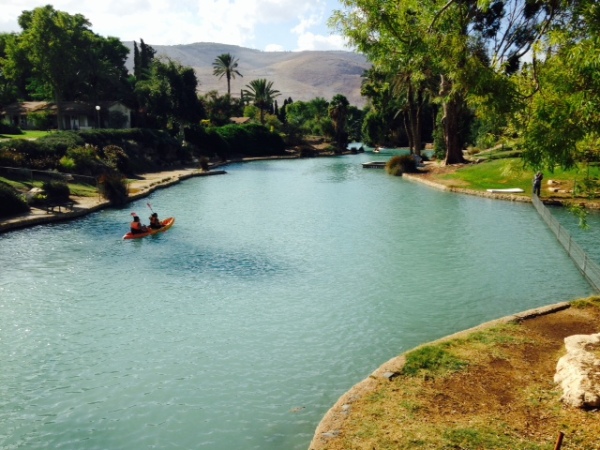 The Jordan River Rehabilitation Conference was convened at Kibbutz Nir David, near the Sea of Galilee.

A Vision of River Renewal

Even while reinstatement of Palestine as a nation remains a searingly hot political potato in the region, leaders in the water and agricultural communities of the region have been able to reach across geopolitical borders and religions in search of equitable and sustainable ways of managing the region’s scarce water resources. Last week’s “International Conference on the Rehabilitation of the Lower Jordan River” brought together water and energy ministers and other dignitaries from Israel and Jordan and included participants from national agencies, the United Nations, the European Commission, conservation organizations, many universities, and local communities. 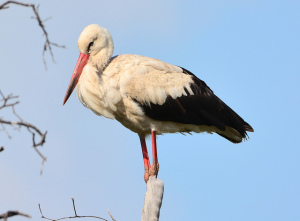 A white stork (Ciconia ciconia). Photo by Ian White, used under Creative Commons licensing.
Many attendees expressed excitement about the tourism potential of the Jordan valley, even beyond its draw for religious pilgrimage. This is the valley walked by early homo sapiens when they migrated north out of Africa, following a route that is still used by a half-billion migrant birds of more than 300 different species each year. Cranes, eagles, buzzards, and sparrowhawks can be viewed in their annual migrations through the Jordan valley, along with a half-million White storks (Ciconia ciconia) that breed in Eurasia during summer and return to Eastern Africa for the winter. The meeting last week was tightly focused on the 25-km stretch of the Jordan flowing downstream from the Sea of Galilee, as that section of the Jordan lies upstream of the politically troublesome West Bank. While aiming only at a short piece of the 200+ river kilometers that run from the Sea of Galilee to the Dead Sea may at first seem short-sighted, much of the depletion of the river’s water flow takes place in this stretch due to the operations of the National Water Carrier and the King Abdullah Canal, meaning that any solutions to put water back into that 25-km segment could benefit the longer river downstream. It is highly unlikely that Jordan will be able to return any water to the river in the foreseeable future, however. The nation is struggling mightily to provide water to two million recent immigrants seeking refuge from the Syrian conflicts, and doesn’t have a drop to spare for the river. Most participants at last week’s conference therefore view Israel as being in the best position to make some water available for the river, but not without enormous challenges as well. Israel has already squeezed most of the water-saving potential out of its cities and farms. The country cut its agricultural water use in half over the past decade and is widely recognized as being the world’s most efficient irrigator. Similarly, Israeli homes and businesses have for decades included low-flow toilets and showers and water-efficient washing machines, and they have avoided water-thirsty landscaping in their building plans. The Israelis have also been actively reusing water from their cities for agricultural purposes, thereby requiring less to be taken from the Jordan or other small streams along its western coast. Desalination of ocean water may prove to be the only hope left to save the Jordan River. Israel has already built four desalination plants that provide more than 25% of the country’s freshwater supply, and has two more plants under construction. The additional water supply coming from desalination will hopefully enable the country to reduce its overdraft of groundwater aquifers, and maybe—just maybe—redirect some water back into the Jordan River. In fact, the Israeli Water Authority recently committed to reallocating 9 MCM of water from the National Water Carrier to bolster flow in the Jordan River downstream of the Sea of Galilee beginning in 2013, with plans to increase that flow restoration to 20 MCM in the near future. Using desalination as a means for offsetting water that is presently taken from the Jordan comes at considerable expense, however, because the electricity required for desalination is very costly. As I discuss in my book Chasing Water, river restorationists usually rely on water conservation and improving irrigation efficiencies as the best means for returning water to rivers.

How Much Water Does the River Need?

The recent commitment to return 20 MCM of water to the Jordan has given the river’s advocates new hope. But they know they have a very long way to go. EcoPeace / Friends of the Earth – Middle East, an international conservation organization, recently commissioned comprehensive studies of the river’s hydrology and water uses, including an assessment of how much water might be needed to “rehabilitate” the river’s health (the FoEME report appropriately distinguishes rehabilitation as a process of bringing a river system back to a healthy and balanced ecological state, as contrasted with “restoration” of a river which implies returning to a natural condition). Assessing how much water a river needs to sustain its health is never easy, but the ecological assessment of the Jordan posed some rather extraordinary challenges. Dr. Sarig Gafny, who led the study, told me that his aquatic sampling required him to step only on the tops of boulders in the river, as he was afraid that if he stepped into the riverbed he might set off one of the thousands of landmines that have been placed along the contentious international border. The FoEME environmental flow report suggests that somewhere between 400 and 600 MCM of water will need to be returned for river rehabilitation. That’s at least 20 times more water than the Israeli Water Authority committed recently. It’s hard to know where the rest might come from, and it’s hard to imagine that it could all come from desalination. But Alon Tal of Ben Gurion University put the cost of that water into perspective for the conference attendees. “Water presently costs Israelis about 60 cents per cubic meter. Producing 400 million cubic meters for the river would cost us about $240 million per year. But think about it: one B2 bomber costs two billion dollars. For the cost of one bomber every 8 years we could bring the river back to life.” Special thanks to Ambassador Ram Aviram, David Katz, and the Lower Jordan Rehabilitation Administration for inviting my participation in the Jordan River conference, and to Eco-Peace/ Friends of the Earth – Middle East for sharing their reports containing many of the statistics cited here.
cities
water