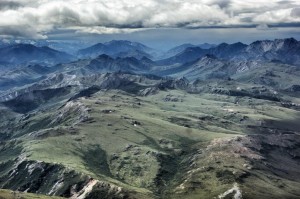 Carnivore Way, Alaska. Image by Alisa Acosta, used with permission. Click to enlarge.
In the last three decades, ecology has advanced in huge leaps, with important conservation lessons along the way. In the 1980s we created the concept of biodiversity to define the variety of living organisms and the habitats they inhabit, and then created the science of conservation biology to study biodiversity. In the process we learned that not all species are equal, and some have stronger impacts on food webs than others. Zoologist Robert Paine termed such species keystones and found many of them to be carnivores, such as sea otters, sea stars, and wolves. He pointed out that in ecosystems lacking keystone predators, biodiversity plummets as unchecked herbivores consume plants to death, thereby eliminating habitat for many other species. Ecologist Daniel Simberloff demonstrated that creating sufficiently large habitat patches for species and corridors for them to move between these patches is essential to prevent species extinction. In the 1990s, we tested these new ecological concepts via bold natural experiments such as the Yellowstone National Park wolf reintroduction. We then collected data, had healthy, vigorous debates about our findings, and by the 2000s had crafted a solid framework to conserve large carnivores. In North America, large carnivore conservation has followed the trajectory of our ecological enlightenment. From the 1700s through the early 1900s, European settlers killed most large carnivores (wolves, grizzly bears, cougars, jaguars, lynx, wolverines) for their valuable pelts, or because meat-eating creatures with sharp teeth and claws presented a perceived threat to agriculture and other human enterprises. However, beginning in the mid-1920s, Aldo Leopold and other natural resources managers recognized that carnivores are essential components of healthy ecosystems and advocated conserving them. While it took a few decades for this radical notion to take hold, by the 1970s we had passed environmental laws such as the Endangered Species Act, which enabled large carnivore recovery in the western United States and beyond. We also learned that because large carnivores cover extensive distances in their daily movements, their conservation must transcend international borders. Understanding large carnivore needs in our rapidly changing world requires a long view. Twelve thousand years ago, two ice sheets covered much of North America. The Laurentian Ice Sheet ranged over most of Canada, and the Cordilleran Ice Sheet blanketed the Pacific Coast. As they receded, a path opened between them. This corridor gradually widened, creating a passage for plants and animals. In time, lush forests arose, and large mammals began to inhabit and move through the steep slopes and fertile valleys of the Rocky Mountains. Today, animals continue to use this ancient migration and dispersal pathway. Indeed, I like to think of it as a “carnivore way,” because of the carnivores who have worn deep trails in this pathway over the millennia. 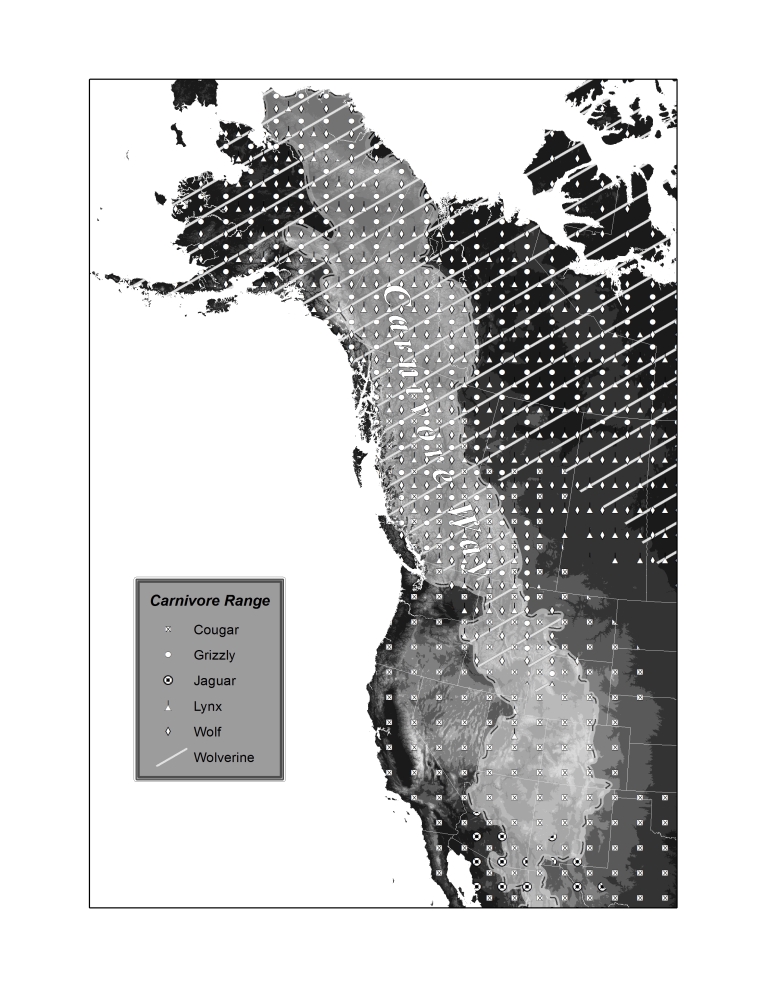 Map of the "Carnivore Way." Image by Curtis Edson, used with permission. Click to enlarge
According to conservation biologist David Theobald, corridors function like lifelines, enabling animals to flow from one core area to another. Barriers to this basic need to move, such as human development, can provide formidable threats to long-term survival of many species. For the large carnivores, it’s not just about losing the freedom to move, it’s about losing a natural process. They and other species use dispersal as a key survival mechanism, to maintain genetic diversity. Species also use dispersal to adapt to climate change. Ten thousand years ago, when North America consisted of vast, unbroken tracts of land, these dispersals were probably fairly straightforward. But today, given our fragmented continent, such movements literally amount to acts of faith. Faith that by acting on instinct, these animals will find what they need to persist as individuals, and beyond that, as species: a safe home, suitable habitat, and a mate. To learn more about the challenges carnivores face today, I traveled the Carnivore Way, talked to dozens of ecologists, ranchers, and conservationists, and spent time immersed in the landscapes these animals inhabit. In the weeks to come, I will be posting some of these species’ stories and the astonishing lessons I learned on my journey.
biodiversity
climate change
conservation
ecology
population
science
trophic cascades
wildlife
wolves