Skip to main content
Home   /   Blog   /   From Carton to Carpet: Recycled Homes
North Americans are doing their fair share in reducing the millions of tons of domestic garbage that the country generates.  Each week they carefully sort their own waste and place it in a box near the curb for a pickup.  When the program began, some argued that recycling is no more than fancy garbage collection.  They were wrong.  Not only has recycling eased the pressure on our landfills, recycled products became the prime component in many construction products. Some 32 percent of all the waste generated by a household can easily be turned into useable products, building materials among them.  The range of resources has expanded in recent years.  A visit to a residential building site demonstrates how successful our recycling program has become.  It also demonstrates that builders are helping to keep the planet clean, even though their acceptance of these materials was not easily achieved.  The products must meet appropriate building standards such as fire-rating, strength and durability.  They also had to be financially competitive with conventional products, and they must be accepted by tradesmen and buyers alike. Several recycled products can be found in the home’s lower level.  The crushed stone conventionally placed under the basement floor and above the home perimeter storm drain, are being replaced by cheaper crushed recycled concrete.  The building of the foundation wall itself is also fundamentally changing due to recycled products.  Polystyrene is now being turned into blocks that, when put on top of each other, form a wall with a cavity into which concrete is poured.  The result is an insulated concrete wall that eliminates the need to use labour-intensive wood forms and keeps the basement warm at the same time. One of the most significant changes in house construction has been the gradual disappearance of natural wood as the prime product.  The horizontal floor structural members - called joists - which were the common building material in past decades, have been replaced by engineered trusses.  The trusses are stronger and are made of recycled wood chips bound together with glue. They also have a larger span, which provides the architect and the builder with interior design flexibility.  I-joists are gradually making their way into the home’s exterior walls as well where they replace the traditional 2” x 4” or 2” x 6” studs.  They facilitate the installation of sheeting and wallboard since they are uniform, with no defects or warping. 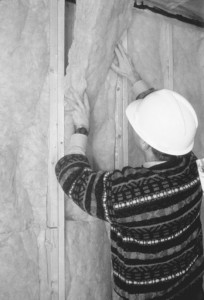 Exterior wall insulation is another area that has seen recycled products rapidly making significant inroads.  One of the chief products used is paper.  The advantages of using recycled paper are enormous since they not only save trees, but decrease air pollution emissions, consume less water and reduce energy consumption significantly in the process.  The newsprint is chopped up into small pieces, mixed with a bonding agent and sprayed into the wall cavity to become a buffer between us and our cold winters. Recycled paper can also be found in the outer cover of gypsum wallboard, roofing paper and in shingles, as well as in multi-purpose fibreboard. Steel studs are becoming a common product in the construction of interior partitions.  The light gauge studs have large amounts of recycled content in them.  They are also light, do not warp and are liked by electricians who do no need to drill holes in them when passing wires. Once constructed the studs are covered with wallboard.  There, fibre-reinforced boards are becoming popular.  They are made of recycled gypsum mixed with fibres which strengthen the board itself.  They do not have a paper facing which makes their finishing process and appearance smoother. Plastics, which account for 5 percent of domestic waste, and account for 21 percent of the volume of landfilled material, are being sought after as a construction product.  It is too expensive to recuperate and reuse plastic containers for the food industry, which makes them a suitable choice for building products. Some of the most notable examples are wall-to-wall interior or exterior carpets.  They are not distinguishable from conventional carpets, come in a range of shades and patterns and are cost competitive.  Recycled plastic can also be found in the home’s backyard.  It has become popular as outdoor decking and railing material, sparing homeowners from on-going protection against the elements. Millions of passenger car tires find their way into landfills each year, which represents a safety hazard.  Rubber has therefore become a target for recycling and it has already found its way into our driveways, sidewalks and paths in the form of interlocking pavers, and into our living rooms as carpet underpads. With increased use, many products made with recycled content are becoming cost competitive.  It is likely that sometime in the next decade we will see a home whose components will be mostly made out of recycled products.  When you place your blue box near the curb you may just find some of the items returning to your home as construction products.
architecture
green building
housing
sustainability