Skip to main content
Home   /   Blog   /   Complete Streets: Changing Design AND Decisions around the...
The stories of success keep rolling in. Portland Maine turned summer maintenance projects into Complete Streets improvement opportunities. Detroit’s Woodward Avenue will be redesigned as a major transit corridor, while Lansing has received the state’s first counterflow bicycle lane, courtesy of MIDOT. And Helena, Montana is requiring sidewalks in new subdivisions. The calmed boulevards, protected bike lanes, and human-scaled intersections are all the more welcome, because they have been so long in coming for transportation reform advocates who have been talking about a different way to build our streets for more than two decades. New design manuals, such as NACTO’s new Urban Street Design Guidelines seem to be showing the way, finally laying out new parameters for building multi-modal streets. The guides help give engineers the guidance they need to narrow lanes, create frequent pedestrian crossings, and integrate the needs of everyone from bus drivers to bicyclists. But a focus on manuals alone misses the profound nature of the change underway. This is because the transformation is about much more than new project designs. The communities that are successfully–and consistently–building complete streets are upending a long tradition in which projects have driven policy. In the past, the need to deliver projects (i.e., roads) has driven the creation of systems to deliver them, and policies were developed simply in support of that mission. But in places with a complete streets approach, policies are now in the driver’s seat, directing streets that improve safety while enhancing community health and economic development. The clear commitment to create roads that are safe for all users has inspired a re-evaluation not only of design parameters, but of all the procedures, decisions, and priorities that guide investments and the day to day work of a transportation agency. Turning transportation planning upside down in this way will only happen if three conditions are met: the community must envision a new transportation future; it must build public and community support; and it must create a clear path to change. Nashville, Tennessee shows how one community discovered these three keys to turning a road-building system into an engine for better communities. First, people in Nashville understood the need to reframe the issue. Public transportation, bicycle, and pedestrian facilities could no longer be viewed as separate ‘amenities’ to be added only after roads are built; they must be seen as integral to a holistic transportation system. The new framework was expressed by Mayor Karl Dean when he signed a new Complete Streets Executive Order with an emphasis on creating healthier and more sustainable communities. The city had already sponsored multiple meetings, forums, workshops and documents to clearly communicate this new approach. 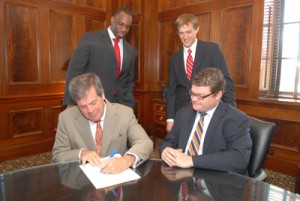 Nashville Mayor Karl Dean signs the city's complete streets policy while staff, including Adetokunbo "Toks" Omishakin, directoro of healthy living initiatives, look on. (Photo by Gary Layda, City of Nashville.)
The second key is to build political and community support for this new vision. The city promoted the former bicycle pedestrian coordinator, Toks Omishakin, to the new position of Director of Healthy Living Initiatives; his work to build both external and internal support for the new frame is documented in my book. The Nashville regional planning agency laid the groundwork for its own policy shift with a survey that found that while 90 percent of respondents get to work by driving alone, most people felt that the most important transportation problems to solve were the a lack of options for transit, bicycling, and walking, along with poorly planned development. 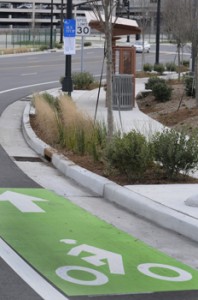 Nashville, TN has made many small improvements, including this bike lane and improved bus stop. (Photo by Gary Layda, City of Nashville)
The third key is to create a clear path from current practice to the new approach. Nashville’s new Major and Collector and Street Plan provided such clarity for street planning in the city, with its two interlocking typology systems, one that focuses on how the street functions for travelers, and the other on how it interacts with surrounding land use. But this clarity was also achieved through a new Public Works project checklist used to identify every opportunity to make multi-modal improvements in the course of everyday repair and rehab. At the regional level, clarity came through a new project-selection process that now gives multimodal projects an edge. Only after all three of these keys were turned did the exciting outcomes start to emerge. The city grew its bicycle network from seven miles to over one hundred miles, and documented that the number of people bicycling shot up 50 percent between 2009 and 2011. Spending is showing a clear shift; in the new regional transportation funding plan, 70 percent of the projects include active transportation infrastructure–compared with just 2 percent of the projects in the plan adopted five years earlier. This change model is being replicated all across the country, not least in Nashville’s neighbor Memphis, which was honored recently for adopting the nation’s 500th complete streets policy. Memphis, and hundreds of communities like it, are not only starting to build roads that look different–they are making transportation decisions in a fundamentally new way. You can get a monthly dose of these successes by subscribing to the National Complete Streets Coalition newsletter, at www.completestreets.org.
bikes
cities
complete streets
development
pedestrians
transportation
planning

Barbara McCann served as the founding Executive Director of the National Complete Streets Coalition, working with groups from AARP to the YMCA to develop and advance the adoption of policies to make streets safe for all users. She is the author of Completing Our Streets.