This unique member of the mint family (Lamiaceae) is found only in Indian River and St. Lucie County.  It is a short-lived perennial with showy pink flowers that bloom in the fall that are pollinated by bees.  Lakela’s Mint is one of six species of Dicerandra, each of which are endemic to only Florida and have their own unique minty aroma arising from a particular mixture of essential oils that are produced in glandular capsules on their leaf surfaces. The entire range of Lakela’s Mint is only a one-half mile wide by three mile long area in remnant scrub habitat, most of which has been converted to housing, commercial development, roads or railways. 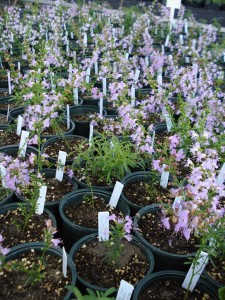 Potted specimens of Lakela’s Mint flowering in the greenhouse at BTG.

Lakela’s Mint likely once occurred as one large contiguous meta-population within this area, but is now fragmented into five small, reproductively isolated colonies, each of which continues to decline in plant number due to overgrowth of competitive plant species and continued developmental pressure.  The current estimate is that there are less than 10,000 individuals remaining. Partnering with St. Lucie County and Indian River County biologists, and with funding from the U.S. Fish and Wildlife Service and the state of Florida, Bok Tower Gardens has worked since 2002 to help conserve this species. Conservation efforts have included surveying each population annually to track the rate of increase or decrease in the remaining number of plants of this species, collecting seeds or cuttings from each population to preserve both seeds and living specimens in the Center for Plant Conservation’s National Collection, introducing a new population onto protected county property, augmenting a small population with additional plants and collecting quarterly demographic data on two populations. 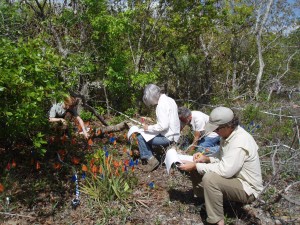 Based on data collected in early 2012, the forecast for the species looks promising. The introduced population is growing steadily.  Seeds and specimens from all historically known sites, including some which are now extirpated, are now represented in the National Collection, so the unique genetic diversity of each will not be lost.  Demographic data has been collected for a full five years on Lakela’s Mint, allowing a greater understanding of its response to events such as hurricanes and droughts, its average lifespan and lifecycle, and the amount of seedlings which naturally recruit each year and survive to become reproductive adults. 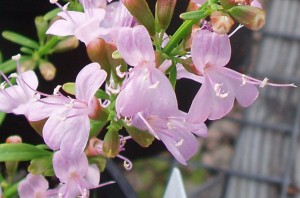 Flowering specimen of Lakela’s Mint in the greenhouse at BTG.

Although it will take years of continued efforts to truly understand and conserve, this species now has a good chance of persisting a little while longer.

Cheryl L. Peterson is Conservation Manager at Bok Tower Gardens in Lake Wales, Florida. She is also a contributor to Plant Reintroduction in a Changing Climate.