Skip to main content
Home   /   Blog   /   Counting People and Cars in China's Capital
Before I left for my year in China, I took a few minutes one afternoon to fill out the federal census form that was delivered to my house. Many Americans may complain about such an “onerous” exercise, but most citizens understand the importance of being counted. Election districts, political representation in the Congress, and federal subsidies are but three of the reasons to support the census. America is not the only country that counts its citizens every ten years; China, too, is in the midst of its own census. Spending a few days in Beijing recently, I noticed some similarities and differences in how the two countries conduct their decadal counts. Ambling through one of the few remaining hutong neighborhoods in central Beijing, I discovered one method that the government is using to encourage people to take part in the census. “Harmony is Crucial to a Harmonious Society. People are the Priority in a Census”, proclaimed a large red banner strung up along an alley wall. A relic of the Mao years, China probably leads the world in using such techniques to exhort its citizens to take part in activities for the common good. 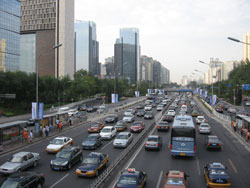 Stimulated by these banners, I decided to conduct my own census. But I was interested in counting cars, not people. Away from Beijing for the last several years, it appeared to me on this visit that the number of cars was overtaking the number of people; traffic was horrendous. I conducted my initial count in the parking lot of my hotel. By mid-morning the lot was full, so I moved to more fine-grained data collection: noting vehicle models. Honda, Volkswagen, Chrysler, Audi, Peugot, Ford, Toyota, Mercedes—China’s vehicle fleet was a melting pot of global brands in this high rent area. My second informal count took place the following day on a pedestrian overpass spanning the Second Ring Road. I was careful to select the non rush hour time of 11:30 a.m., but as I stared down from my perch, all the lanes were choked with barely-moving cars in both directions. Maybe there were as many cars as people in Beijing. At the limits of informal data collection techniques, I resorted to some recent articles in the English language China Daily and an answer appeared. People (19 million) still outnumber cars (4 million) in Beijing, but automobiles are catching up fast. Air pollution and gridlock are out of control. In 2009, China passed the U.S. as the largest market for car sales in the world. Vehicle sales for 2010 are far outpacing the record set last year; analysts project 16–17 millions cars will be sold this year in China. For relatively wealthy Beijing, this means that every day some 1,900 cars are hitting the city’s overtaxed roads. By this December, a million more cars will be on Beijing’s streets. If this growth rate continues, even with all the plans for more roads and mass transit, Beijing’s roads will reach maximum capacity in about five years. The government is scrambling for solutions. Hybrid and electric vehicle sales are set to take off next year, which should begin to address the dreadful air quality. But zero emissions or not, a car is a car in a traffic jam, and there is no solution to the sheer mass of new vehicles driving onto the roads of China short of the politically unthinkable: restrict car sales. My informal census complete, over three days I walked some 35 km (21.7 mi) around Beijing getting to appointments, giving a book reading, and wandering the hutongs. By the end of my stay, I realized that for the first time on any visit to the capital, I had never taken a taxi. Beijing is increasingly dominated by infrastructure geared for cars. The U.S. made the same mistake in the 1960s and 1970s; you would think the pragmatic Chinese would be smarter than us. After all, “Census Benefits All”, proclaimed another hutong banner. Right now in China, however, you may count cars and people, but that doesn’t mean you can manage them.

R. Edward Grumbine teaches environmental studies at Prescott College and directed the Sierra Institute, University of California Extension, Santa Cruz, for more than a decade. He is the author of Ghost Bears, Where the Dragon Meets the Angry River, and Thinking Like a Mountain.