Skip to main content
Home   /   Blog   /   Crop Repatriation
Repatriation literally means to bring something back to the fatherland, taking into custody something which once belonged to your cultural community. There have been other instances of crop repatriation-notably the dozens of Hopi crop varieties relocated, documented and returned to the Hopi Cultural Preservation Office in 2002. This was facilitated by members of what is now called the Renewing America's Food Traditions collaborative, including the Seed Savers Exchange, Native Seeds/SEARCH and the Center for Sustainable Environments. Picking up where I left in my last blog post, the repatriation of Peruvian potatoes for in situ conservation has been unprecedented both in scale and in its acceptance by one of internationally-funded crop conservation and improvement centers (collectively known as CGIAR). Key scientists at the International Potato Center (CIP) had become convinced that such a community-based conservation strategy was indeed worth supporting. Some two decades before, however, CGIAR administrators such as Trevor Williams formally dismissed in situ conservation strategies as impractical, costly and unproductive. Today, CIP's more forward-thinking scientists provide technical assistance upon request to farmers in the Potato Park who wish to gain advice on the best ways to cultivate, fertilize and manage their many varieties of native tubers. At the same time, the leaders of the Parque de la Papa has requested that the UN Food and Agriculture's International Undertaking on Plant Genetic Resources formally recognize their cultural landscape as a "gene bank" of equal importance and status of that of the International Potato Center. 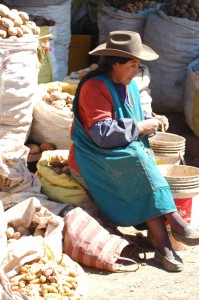 Today, the Quechuan farmers in the Potato Park maintain some 1200 varieties of potatoes named in their own language, in addition to razas criollas (land races) of maize, oca, quinoa, fava beans and wheat. When you visit them, you are at first dazzled by the sheer splendor of colors woven into their caps, ponchos, pants or dresses; these are folks that understand beauty. But color is not merely ornamental; the many varieties of potatoes range from black and purple to brown and yellow; they are knobby, curvilinear, oblong, round, or shaped like a hen's egg. Each has its own identity, its own flavor, its own texture; some even have their own "voice." Quechuan farmer Ricardo Paco Chipa of the village of Paru Paru explained to me how one potato variety was found to have its own voice. It is now known as a "guardian potato" who collaborates with human guardians or stewards of potato diversity to protect this diversity from outside threats. "The guardian potato is known as Santo Ruma. It began to speak one time when a thief came to rob all the potatoes from a field; it scared away the thief, and woke up the people to defend the field. Of course, it is rare for a potato to speak, "Ricardo added soberly, "but by doing so, it saved the others. Those of us who are appointed as human guardians of the potatoes must recognize this." I was intrigued by the notion that at least some of the potato varieties were perceived by the Quechuans as embodying qualities that the rest of us might attribute only to humans. Ricardo was straight forward in his defense of this notion: "Potatoes are part of our family. We keep them in our homes with us." An elder several decades older than Ricardo added that one should never cut a potato with a knife, because it is alive. Such empathy with the sentience of potatoes is complemented by detailed technical knowledge about the plants themselves, and the environments in which they grow. One of the Quechuan farmers of the Potato Park wanted to affirm to academically-trained biologists of the veracity of his community's knowledge: "We want the world to know that we ourselves are scientists of the potato. We have detailed knowledge about the life of these plants. We read their flowers, their leaves, their vines. We read the soil, the weather; we see how the plants respond to the winds. They are our books." What do you think? Leave us a comment. ———- Gary Paul Nabhan is a world-renowned ethnobiologist, conservationist, and essayist. He is the author of the new book, Where Our Food Comes From: Retracing Nikolay Vavilov’s Quest to End Famine.
conservation
farming