This post originally appeared on Cheryl Heller's Design Observer blog and is reposted here with permission.

This letter is a response to your request for ideas—for the philanthropic strategy you’re thinking about. You say you like long term, but you’re drawn to “the other end of the spectrum: the right now.” I get that, and have the perfect answer for you, one that serves both ends at the same time. I hope it also has personal resonance.

That was a brilliant choice of name, by the way. You must have planned from the start to build a company of unimaginable scale, supplying all the things people need to live (and now Whole Foods, too). Over four hundred and eighty million products in the U.S. according to Google, with an average of four hundred eighty five thousand new ones every day. That’s remarkable growth, and it doesn’t include your drones or the Amazon Cloud. (Clouds are another thing your company has in common with that eponymous rain forest, the one that generates weather for the entire planet.) We read that you added another twenty billion to your net worth in the last six months as well. That’s no-joke growth. Congratulations.

The Amazon rainforest is not doing as well. It’s shrinking at about an acre and a half every second. The indigenous cultures that lived there without destroying it are mostly gone. Their knowledge is lost and their cultures abandoned. The president of Ecuador has opened up his country to mountain top mining, destroying what a biologist I met called “the most exuberant example of nature left to us.” Illegal logging is rampant and we’re losing species at a dizzying rate. But you know all that.

All of this is just abstraction until you go there, though. Until you go, these facts live only on a computer screen. They are not as compelling or urgent, even, as searching for the next item or doing the Amazon single-click purchase, which I have done a million times, it seems.

Have you been there? You would probably not want to go where I went—a tiny, remote biodiversity station requiring six hours of river travel in a low slung wooden boat and two hours in a bumpy Rover, not to mention the flight from New York or California. You wouldn’t feel safe there, and your life is too important to risk. 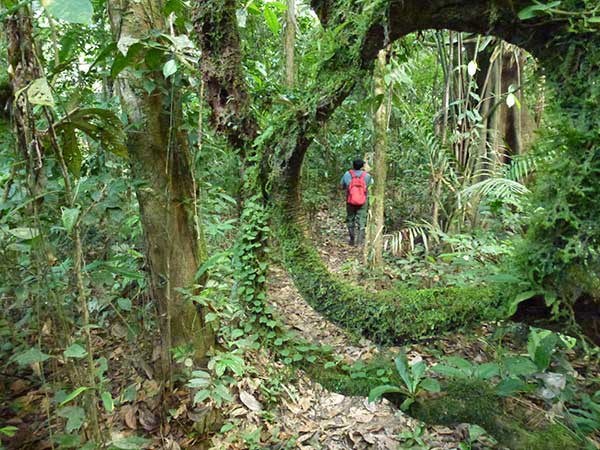 It’s impossible to describe the peace that comes from letting go of the instinctive human need to control our surroundings, of feeling vulnerable and therefore more alive than you’ve ever been; or of disappearing into something greater than any human being or even country could ever be, filled with species so exotic and beautiful they make civilized life, even virtual reality, seem drab.

The local guides don’t care who you are, or know how to order online, but they know every plant and trail in their part of the rainforest and how to survive there. They lead you on an adventure filled with five kinds of monkeys and just a few of the more than one thousand species of ants in the region who “basically run the place.” I learned a little about ants from the E.O. Wilson books I bought from you. There are leaf cutters and fire ants and “the ants that make you take your pants down” because they so quickly make their way to the tender places where you’re not looking for company, particularly in overwhelming heat and humidity. Then there are ants that taste like lemons when you put them on the tip of your tongue. They live in little bulges in a certain kind of palm tree.

Some things are almost predictable, like seeing your first anaconda or caiman. Or watching a still creek turn into a roiling stew when its piranha population senses something living hit its surface.

There are things no one mentions because they’re so commonplace but strange for us in North America, like that the most incredibly colorful butterflies come in kaleidoscopic swarms, like a flock of starlings or an airborne school of fish. Or that the jungle at night is louder than Times Square, or that there are plants, known only to ultra locals, that cure liver disease or cancer or arthritis.

The thing is, it wouldn’t really be that hard to save the Amazon. Especially for you. There was a plan to do it, for the rich countries of the world to pay the Amazonian countries enough to make saving the rainforest more profitable than destroying it. But the rich counties stopped, they got caught up in other issues, which, it’s safe to say, won’t be sorted out for a long time.

The short term, the “right now” as you call it, is that you could watch land and species and knowledge being saved minute by minute. The long term is that, since the Amazon is literally, as it’s called, the lungs of the earth, you’d actually be saving the planet. What if technology could be put to use to help, to make it something everyone knows and cares about?

It would be a very sad thing if at some point, there is only one Amazon left in the world and it is your company. I guess we don’t really need to worry about that, though, since there likely wouldn’t be a world.

I can’t imagine what it feels like to be the person of Amazonian strength and scale who could save the Amazon. But you can. Doesn’t this have your name on it?

Thanks for your consideration.

Cheryl Heller is the Founding Chair of the first MFA program in Design for Social Innovation at SVA and President of the design lab CommonWise. As a strategist, she has helped grow businesses from small regional enterprises to multi-billion global market leaders, launched category-redefining divisions and products, reinvigorated moribund cultures, and designed strategies for hundreds of successful entrepreneurs.