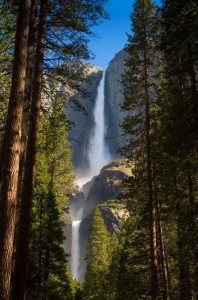 Yosemite Falls. Photo by Terry Chay, used under Creative Commons licensing.
As the summer national park visitation season gets underway and as the federal government shutdown recedes in the public’s memory, the extraordinary American national park system beckons visitors. It’s appropriate therefore to contemplate what the system holds for visitors as well as the future it confronts. My work and travels have recently taken me—figuratively and literally—to several iconic national park sites that speak to the system’s remarkable diversity and attraction. This summer Yosemite celebrates its 150th anniversary as the first large natural area set aside by Congress in 1864 for the purpose of “public use, resort, and recreation,” albeit as a state not federal park site. In this era of political paralysis, it is heartening to recall that Congress and President Abraham Lincoln, without opposition or even much debate, had the foresight and will in the midst of the Civil War to ensure that this scenic landscape was preserved for everyone to enjoy. Yosemite will be offering visitors a special exhibit in the Park Museum that recounts the park’s early history, including classic photographs that helped convince Congress to protect the Valley and the initial documents creating the park. 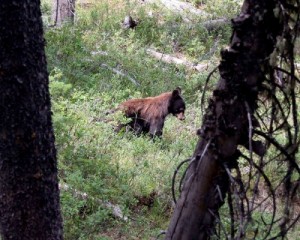 Young bear in Grand Teton National Park. Photo by JHCR, used under Creative Commons licensing.
Last month, while entering Grand Teton National Park and encountering a tell-tale assemblage of parked cars, we spied at a distance what we assumed was a beaver swimming across the Snake River, which is what seemed to have attracted everyone’s attention. But once it reached the other bank and emerged from the rollicking current, it plainly was not a beaver but rather a young grizzly bear. His playful antics, as he proceeded to paw the riverbank and to flop back into the water, delighted the crowd, to which he was oblivious.

Bison in Yellowstone National Park's Lamar Valley. Photo by Kim Seng used under Creative Commons licensing.
In Yellowstone, we found frozen lakes and a couple feet of snow still covering much of the park, but the wildlife was out and about, along with a throng of early season visitors enjoying the spring-like weather. More distant encounters with grizzly bears prowling Hayden Valley, along with numerous bison, all foraging for food on the grassy plains that were emerging from the winter snow cover.Many more bison in the Lamar Valley, where the snow had receded from the lower elevations, including the first smattering of bison calves wrapped in their distinctive cinnamon colored coats that contrasted sharply with their mamas’ deep brown coats. No wolves on this trip, although other visitors had seen one the day before when it boldly crossed the road in quest of food for the suspected pups waiting hungrily in a den situated on a distant hillside. 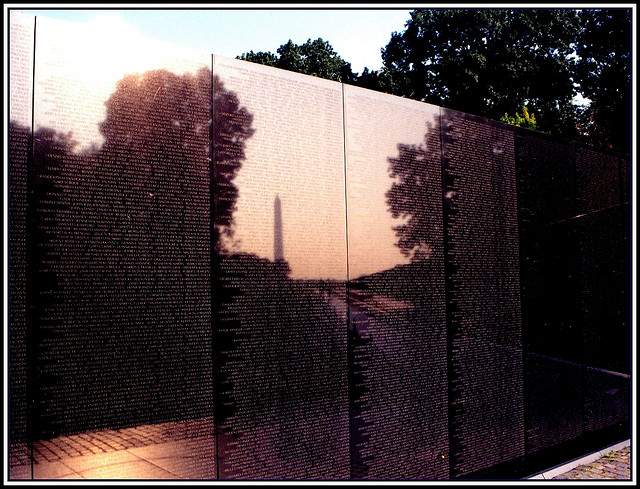 The Vietnam Memorial. Photo by ManHole.ca used under Creative Commons licensing.
A couple weeks later, I unexpectedly found myself in Washington, D.C., and spent a sunny afternoon wandering the Mall and pondering the nation’s history as well as my family’s connection to it. The Lincoln, Martin Luther King, Jr., Vietnam, and World War II memorials, as well as the quiet beauty of the Tidal Basin all triggered an intense emotional response. I was overwhelmed with a sense of sadness and tragic loss at the Vietnam Memorial, when I paused before the name of my look-alike fraternity brother etched on the wall, wondering what his life might have been but for the mortar shell that brought it to a premature end on a lonely marine outpost in South Vietnam’s northern highlands. The nearby World War II Memorial likewise evoked powerful emotions, as I contemplated the enormous sacrifices of the Greatest Generation, including my own parents, both of whom served in the armed forces during that conflict and both of whom are now at rest in Arlington Cemetery across the Potomac River from the Mall. And how could I forget the civil rights struggles that extended throughout my childhood and beyond, including the contentious picketing in my hometown that finally succeeded in desegregating Glen Echo Amusement Park, another National Park Service-administered site along with the nearby Clara Barton House. 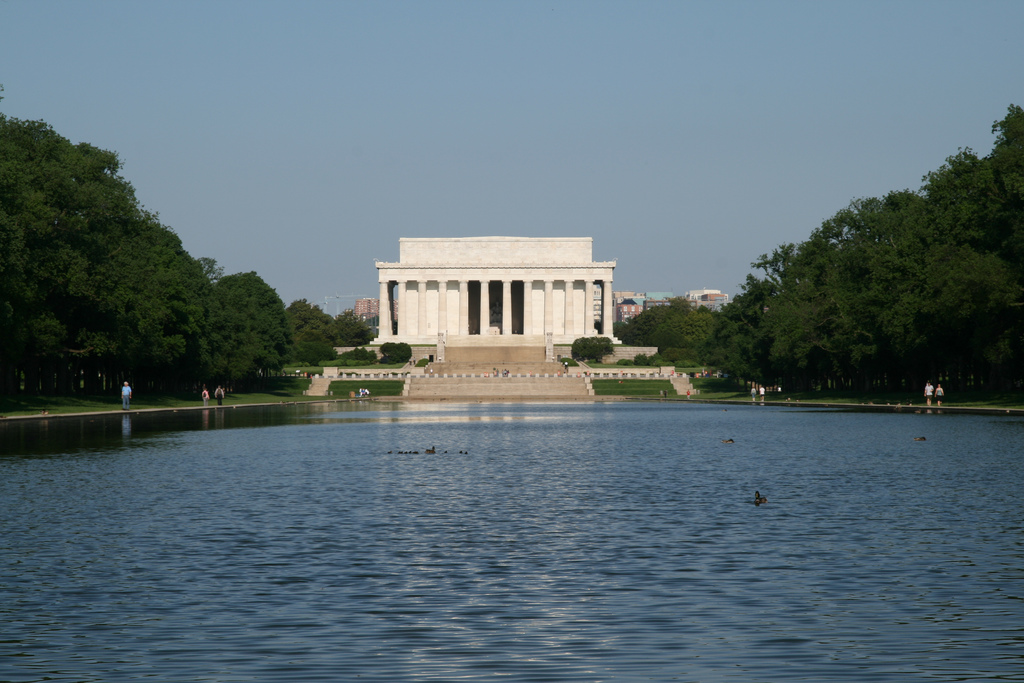 The Lincoln Memorial. Photo by Bernt Rostad, used under Creative Commons Licensing.
At the Lincoln Memorial, the immortal words of President Lincoln’s Gettysburg Address continue to inspire and resonate with visitors from literally around the world. Lincoln’s memorable language prompted me to recall the principles at stake in the Civil War and the tremendous loss of life the country experienced to vindicate those timeless values that lie at the root of our nation. That there was an intrepid anti-abortion speaker holding forth on the steps of the Lincoln Memorial was yet another testament to the enduring constitutional rights of liberty and equality that have abetted this nation’s ongoing struggles to form a more perfect union, whether we agree or disagree with the speaker’s message. All of this nature and history and much more can be found across the national park system. Steeped in tradition and engrained in our culture, our national parks not only tell the nation’s stories, but also hold deeply personal stories as well. These remarkable places that we have preserved for posterity are open to everyone, so don’t forget to visit them this summer. And when you are there, take a moment to ponder why our national parks and historic sites speak so powerfully to each of us, and pause to consider what legacy of new national park sites we should be leaving for the generations that will follow us and carry the American torch into the next century.
cities
conservation
D.C.
forests
national parks
urbanism
wolves
Yellowstone
Yosemite