As I watched, mesmerized, this mass of crustaceans became a living brick-red raft, writhing on top of the water’s surface. The water became disturbed as thousands of krill flipped their muscular tails and leaped clear of the water, falling back like a shower of pink raindrops.

So begins the journey that cemented Stephen Nicol’s passion for krill. Now, after studying the crustacean for nearly 40 years, Nicol wants us to know more about this enigmatic and vitally important creature of the sea. In The Curious Life of Krill, he debunks the myth that krill are simply microscopic whale food and immerses readers in a dark and icy world full of wonder and surprises. Read on for eight surprising words that describe this misunderstood species. 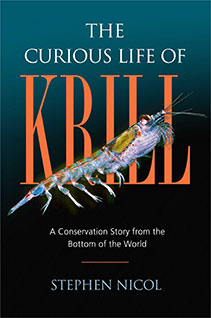 1. Copious. Antarctic krill may be the most abundant animal on earth. By weight, there could be more krill on the planet than humans.

2. Average. Krill are not tiny, microscopic zooplankton. They are average-sized marine animals, weighing about a gram and growing to 6 centimeters in length. Their size usually shocks first-time viewers who expect them to be much smaller.

3. Beautiful. Krill are mostly transparent but can blush brick-red when stressed. They can also put on a spectacular light show when stimulated using their many blue light organs. Their underlying color depends in part on their diet: krill can be dark green in the spring when they are gorging on algae but become less verdant during the rest of the year.

4. Cool. Antarctic krill, not surprisingly, are only found in the icy waters around Antarctica. Water temperatures above five degrees Celsius cook krill. Their habitat is covered by ice for much of the year and their young depend on plants that grow on or in the ice.

5. Geriatric. Krill can reach the ripe old age of 12 years. They grow by moulting but if food is in short supply they can shrink in length. This confuses scientist’s attempts to work out how old individual krill are because small krill are not always young krill.

6. Sociable. Krill live in vast swarms or schools that can stretch for tens of kilometers. Curiously, living in such large, obvious aggregations makes life safer for individual krill but it does mean that bulk feeders such as whales can eat millions of krill in a single mouthful.

7. Nutritious. Vast numbers of penguins, seals and whales survive on a diet of Antarctic krill and grow and reproduce at amazing rates. The nutritional value (and abundance) of krill also means that they are currently fished to produce food for farmed fish.

8. Commercial. Antarctic krill have been commercially fished for over 40 years. The current catch of approximately 200,000 tons/year makes it one of the world’s largest crustacean fisheries, but this level of catch is less than five percent of the estimated sustainable level of harvest.