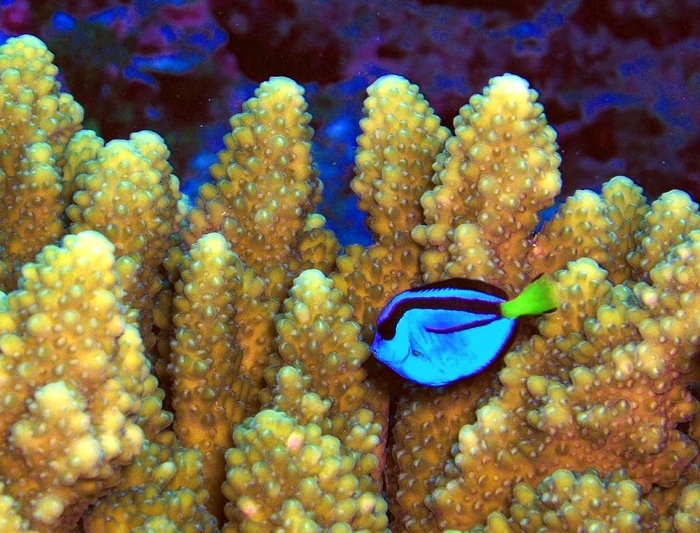 A Pacific blue tang in the Pacific Remote Islands National Wildlife Refuge Complex, in the neighborhood of where President Obama plans to create the largest marine protected area. Photo by Jim Maragos/USFWS, used under Creative Commons licensing.
President Obama’s recent announcement of a new and very large marine protected area in the Pacific is good news indeed, and the kind of national leadership we need more of. There is much more to do, of course, and the new MPA raises important questions about how ocean conservation tactics will best succeed. One important question is how this new immense area of the Pacific Ocean will be regarded by terrestrial citizens. How do we foster genuine emotional connections with, and caring for, organisms and environments that are so far away? Can habitats thousands of miles away engage our hearts and minds in ways that will lead to active support, both political and economic, for their long-term protection? 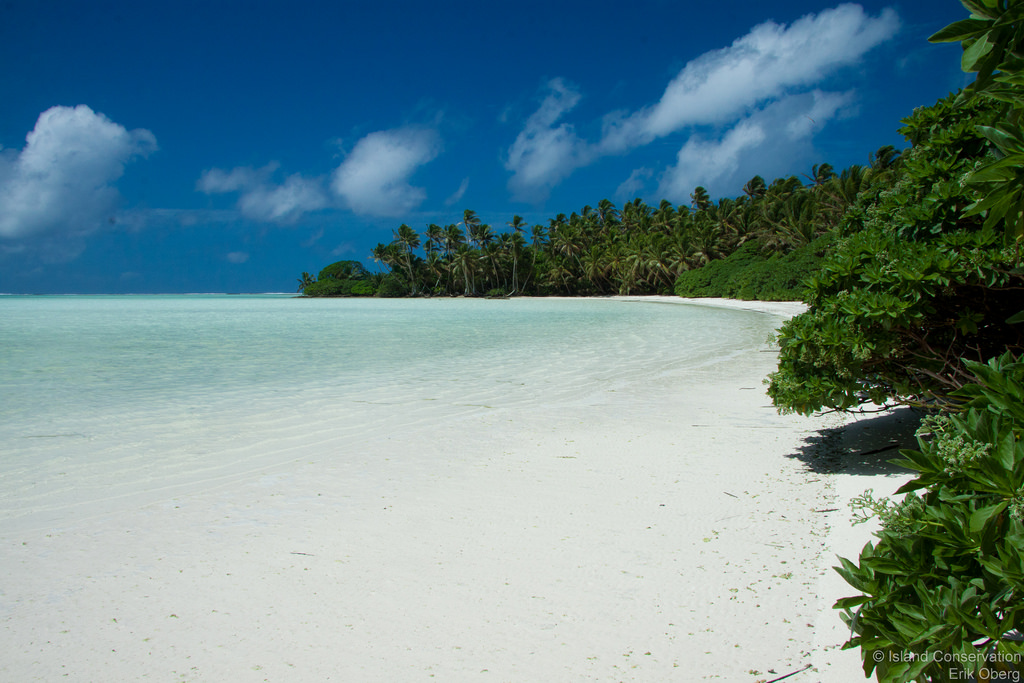 Palmyra Atoll, which is already protected as a marine monument from President George W. Bush's term, is in the neighborhood in which President Obama is planning to create the largest marine protected area to date. Photo by Erik Oberg/Island Conservation, used under Creative Commons licensing.
Part of the answer is that we will need to find more creative ways to break out of our heavy (and understandable) terrestrial biases.  A new vision of cities and city planning—what I call “blue urbanism”—that emphasizes urban connections with the ocean world and a strong leadership role for cities in ocean conservation, offers hope. It is already happening in some places, as cities are beginning to expand their conceptions of space and place to include the marine world, planning for blue belts as well as green belts, and shifting mental maps to “see” and take pride in the often immense marine biodiversity around them. There are many specific steps cities can take to moderate the impacts of urban consumption and lifestyle on our oceans, from reducing land-based pollutants to greening ports to nurturing more sustainable community supported fisheries (CSFs), among many others. The Obama announcement demonstrates what is possible through federal leadership, but much can and must also happen at the local level. And there is a myriad of more creative ideas for fostering city-ocean connections and connectedness that are already being discussed and, in some cases, implemented. Imagine a program of ocean sister cities, in which a city adopts and makes commitments to, say, a sea mount, marine canyon, or other ocean habitat. Some cities are already sponsoring and participating in marine biodiversity inventories that include a strong citizen science component and integrating marine science into local school curricula. The larger task will be cultivating an ocean ethic that recognizes that our own health and well-being are inextricably connected to the health of oceans and that the human species is an ocean species. It is an ethic and sensibility that sees the wonder and awe of ocean life, its intrinsic value, and a profound responsibility to work on its behalf.  On an increasingly urban planet, cities must take the lead in fostering this new perspective, harnessing their economic resources, and forging the political and popular will to make ocean conservation a priority.
biodiversity
cities
conservation
oceans
sustainability
urbanism
wildlife