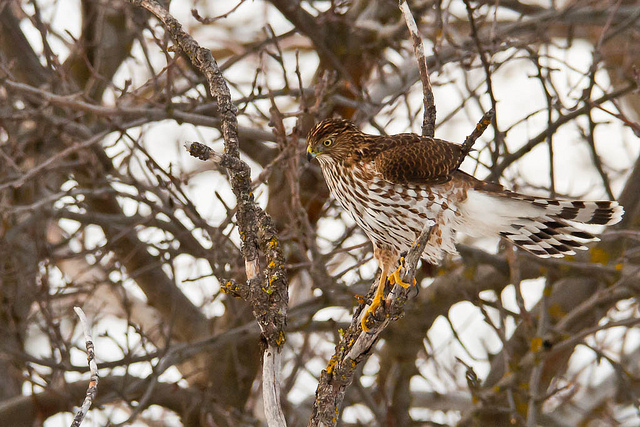 Cooper's Hawk. Photo by Tom Talbott, used under Creative Commons licensing.
Originally published by Village News, a publication of the community of Cabin John, MD. A grey missile shot across my backyard heading straight for the titmice, wrens, and chickadees piled into the feeder. The mixed flock of species exploded into the air, all with the same desire to escape the talons of this local marauder. They had nothing to fear; the hawk had spotted a more robust straggler. It hit the Mourning Dove with such force I could hear the impact from twenty feet away. I thought the hawk would drop to the earth given the weight of its prey, or worse, crash straight into our border fence. At the last moment, this acrobat among raptors braked, flew straight up over the looming barrier, banked left, and made straight for a wooden fence post fifty feet away. The hawk, now secure on its perch, began plucking feathers from the lifeless dove. I regretted that I had left my binoculars inside. I wanted to assure myself that this Serengeti-like attack, in my own backyard, was carried out by a male Cooper’s Hawk and not the maddeningly similar female Sharp-shinned Hawk. Both species of hawk are small, slightly smaller than a crow and feature a long banded tail, grey back feathers and orange barring on the breast, bright red eyes (in the adults), and broad, rounded wings. The wing and tail design make these two birds perfectly adapted to streak through the forest interior, horizontally, or drop straight down from a high perch through a natural obstacle course over and under tree branches in pursuit of their favorite prey—forest birds. In many raptor species, females are larger than males, and although Cooper’s are often larger in size than Sharpies; a small male Cooper’s hawk can be confused with an unusually large robust female Sharp-shinned. A sophisticated birder can name the ten or so subtle cues to distinguish one species from the other, but here are two easy tips for an amateur watching from the veranda: if the hawk in question came after the birds at your backyard feeder in winter, you can be fairly certain it was a Cooper’s. Most Sharp-shinned Hawks migrate south in fall, while the Cooper’s stays around. Moreover, Sharpies stick to hunting in the dense forest; it’s the Cooper’s that has learned to plunder the neighborhood feeders for an easy meal. Some biologists even say that good-hearted nature lovers who stock their feeders full of sunflower seeds in the winter are not feeding the birds but feeding the hawks. Cooper’s Hawks are magnificent daredevils in flight, so agile they can snatch much smaller songbirds on the wing. One might think that this elegant flier might have been named in honor of James Fennimore Cooper or even Gary Cooper. The truth is the bird was first described in 1828 by Charles Bonaparte for a friend and colleague, William C. Cooper, who in turn was the father of another venerable Cooper, James C., who achieved such acclaim as a bird biologist that the Cooper Ornithological Society bears his name. In rural parts of the U.S. this species is known as the Chicken Hawk. This term now has derogatory political connotations, but at least for the Cooper’s it has no relevance. They prefer wild birds, ranging in size from wood warblers to wild pheasants. And thankfully, they eat invasive species—they won’t pass up a European Starling in their sights. But when they miss their target, either native or introduced, the results have serious consequences. A fifth of all Cooper’s Hawk skeletons examined in a museum study showed fractures in the chest bones. While the Cooper’s Hawk continued to dismember its prey on the fencepost, I began thinking of the larger meaning of the drama I had just witnessed. For decades, evolutionary biologists fiercely debated the main structuring force in the communities of birds—or any other group of related organisms we see in nature today. The majority of scientists considered competition among species, in the present or even in the distant past, as the driving force behind how species are assembled in any natural community. The second most popular theory considered predation as the major structuring force in animal communities. Whether it is the preying of Cooper’s Hawks on songbirds in the Eastern broad-leaved forests of Cabin John or the feeding of starfish on mussels and other bivalves clinging to intertidal rock surfaces along the Pacific Coasts—the forces of predation shape nature’s composition. For decades, the challenge for this latter view was that predation was rarely seen by scientific observers. But that is no longer the case: amazing footage obtained by patient wildlife photographers has captured on film time and again what many biologists suspect: most organisms in nature die by being killed by other species. Even Sharp-shinned Hawks are occasionally pursued and killed by their cousins, the Cooper’s Hawk. It’s a rough world out there, even in our own backyards. And living so close to a national park like we do in Cabin John, a stroll along the Potomac can make you a front row spectator for what is perhaps the most common, if little seen spectacle in nature.
biodiversity
birds
ecology
science
trophic cascades
wildlife