Skip to main content
Home   /   Blog   /   Ghost Trees
The standing dead trees were everywhere, their boles weathered silver where the bark had peeled. The carcasses of their fallen comrades littered the understory, with few aspen sprouting from the deadfall. The occasional mangled saplings we observed provided graphic evidence of heavy elk browsing. Recently, I explored this stand of ghost trees on Colorado’s High Lonesome Ranch (HLR), accompanied by some of the finest aspen ecologists in North America. Such stands are so ubiquitous in the Intermountain West that in 2008, US Forest Service ecologist James Worrall termed this phenomenon SAD (Sudden Aspen Decline). Rapid canopy death accompanied by lack of understory sprouting characterize this troubling decline. For the past decade, such forests have inspired ecologists like Charles Kay to ask, “Are aspen doomed?” In late June of this year, the Western Aspen Alliance (WAA) convened a symposium on the HLR, a conservation ranch that covers 300,000 square miles, to help answer this question. Aspen is the most widely distributed tree species on earth. An aspen stand often consists of a single organism, called a clone, which comprises genetically identical stems (e.g. trees), sprouting from a common root system. Aspen’s purported decline is of high conservation concern, because this species provides some of the richest, most biodiverse habitat in terrestrial ecosystems. While SAD is primarily related to drought, at the symposium we examined other predisposing factors, such as heavy herbivory by elk and cattle, and disease and insect outbreaks. Together these environmental forces have stressed aspen to the breaking point in many regions. But are aspen really doomed? On the HLR, Worrall and others presented data that suggest that while aspen may be declining on a regional scale, on a continental scale, this species may be stable overall. However, climate change could rapidly tip that balance into decline. Karen Mock, of Utah State University, illustrated the potential role of genetics in aspen conservation, with some clones more resistant to stressors such as drought and herbivory. Rick Lindroth, of the University of Wisconsin, elucidated the role of plant defense compounds in maintaining aspen resilience. Paul Rogers, of Utah State University, showed how the various aspen stand types (e.g., boreal, seral, and stable) each has different potential to resist SAD. Sam St. Clair, of Brigham Young University, discussed the crucial role of fire, which stimulates aspen sprouting. 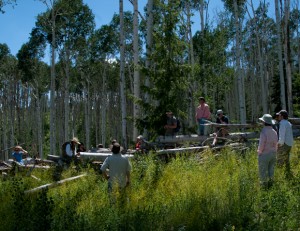 I presented material about how wolves can indirectly benefit aspen forests. With wolves on the prowl, elk must be more wary and keep moving to stay alive, rather than standing still, munching sprouts to death. Additionally, Trent Seager, of Oregon State University, demonstrated coppicing (which means clear-cutting) as a powerful restoration tool that can stimulate vigorous root-sprouting. Indeed, thousands of pale green aspen sprouts heavily carpeted one of Seager’s coppiced plots on the HLR, in a stand that otherwise demonstrated classic SAD symptoms. Like all ecosystems, aspen communities are tangled webs. We did not find easy solutions to something that is a complex manifestation of climate change. But we found ways to create more resilient aspen communities, such as controlling cattle grazing, accepting fire, and restoring wolves. While we have much to learn about aspen restoration on a continental scale, meetings such as the WAA symposium give me hope that we are finding the tools we need to create more sustainable aspen forests.
biodiversity
forests
trees
wolves