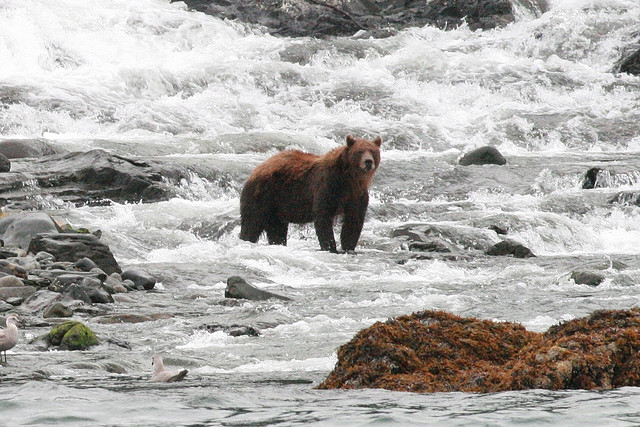 A grizzly bear in Alaska. Photo by Arthur Chapman, used under Creative Commons licensing.
We trail a band of French women. We are on our way to Iceberg Lake in Glacier National Park and they are making a racket, singing loudly. Though we revel in Nature’s music—a bird call, the rush of water, or the echoing boom of ice fall—we keep the femmes françaises within earshot. They are our “bear blockers.” They sing to warn away grizzly bears; walking behind them we can let down our guard. Immersed in the wilds of Glacier we are filled with both anticipation and anxiety: We hope for an encounter with the wild, yet we carry a holster loaded with a can of pepper spray in case that encounter is too close for comfort. 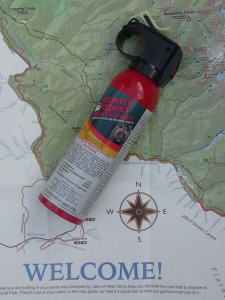 Pepper spray. Photo by Emily Monosson.
Grizzly bears, Ursus arctos horribilis, are the wild that we both crave and fear. They are awesome and terrifying, and they exist at our mercy. Tens of thousands of grizzlies once roamed the continent from Canada to Mexico, from the mountains to the plains. Within a hundred years, as settlers advanced, populations were hunted out of existence. Today, five populations remain in the continental U.S., each clinging to remote mountainsides. One of the largest  roams the slopes and valleys of the Northern Continental Divide Ecosystem, a swath of rugged landscape ranging from Lincoln, Montana, through Banff, Canada, including Glacier National Park. Nearly eight hundred make their home in the U.S. portion of this landscape, many of them in Glacier. USGS biologist Tabitha Graves, a one-time German literature major now captivated by the charismatic animals (“I believe I did a dance of joy,” says Graves, upon hearing she'd been offered an opportunity to work on bears for her degree)—knows most of them by name. On the wall in Graves’ office space is a map of the region studded with push pins and bits of yarn revealing a complex network of family ties amongst some one thousand individual bears. A pin for each bear: Bluto, HanSolo, Jaspar, Kiyo, Jewel. 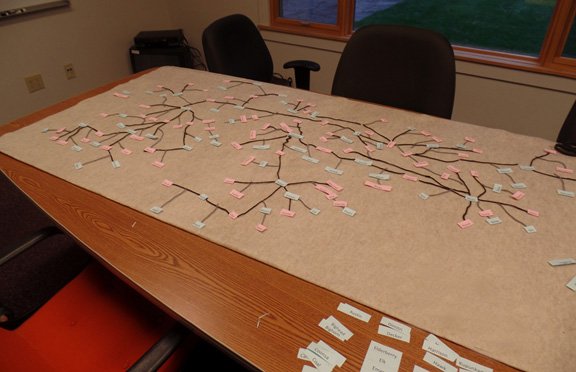 Mapping relationships between the bears of Glacier National Park. Photo courtesy of Tabitha Graves.
Graves’ colleague, biologist Kate Kendall, initiated this genealogy of the wildest, extracting DNA and therefore family history from clumps of bear hair collected from trees and barbed wire set up to collect these so-called “hair snags.”  “We have at least three generations collected between 1998 and 2012,” says Graves, her eyes sparkling when she talks about this wealth of data. The data allow the biologists to track how far offspring wander from their mothers and whether they are traversing mountains or roads. Through modeling says Graves, “we can answer both how far young bears can go and also how likely it is that a young bear will disperse across a high road density area versus a low road density area.” And they can tell that brother bears like Sourdough and Weisner had crossed paths at least once over the course of two weeks. The goal is to one day use these data to figure out who goes where and when—which in turn may lead to developing better plans to connect dispersing bears from the Glacier area to further west in Montana. Ever since settlers moved west, the fate of these bears has been in our hands. “The limitation has been people killing bears,” explains Graves. Once the slaughter stopped when the bears were listed under the Endangered Species Act populations bounced back. 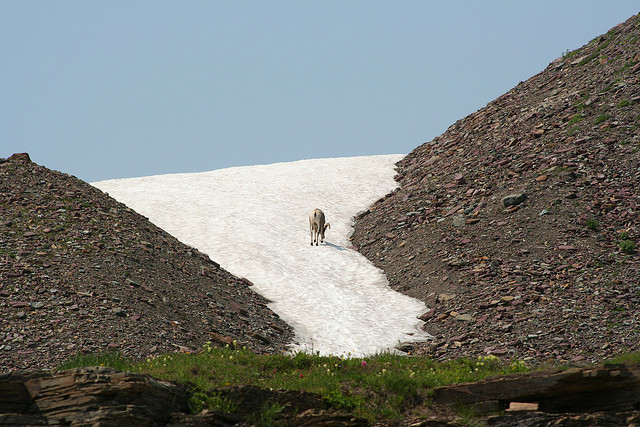 A big horn sheep in Glacier National Park. Photo by RLEVANS, used under Creative Commons licensing.
Yet even as the bears of the Northern Continental Divide system are on the brink of being “delisted” they, along with other species emblematic of the wild—the big horn sheep, mountain goats and diminutive pika—face a new challenge, one that we can’t simply dial back like hunting: climate change. Glacier is not just warming: on average, it is warming nearly 1.8 times faster than other parts of the globe. There are fewer really cold days and more really hot days, the cold is coming later and the warmth of spring is arriving earlier, snowpack is declining, trees are moving up slope, and seasonally dependent life events in both plants and animals are shifting in time. By some estimates Glacier National Park may be bereft of its namesake glaciers in less than two decades. How climate might impact grizzly populations in anyone's guess. And so, along with bear genealogy, Graves is joining the growing number of scientists working the front lines to assess the impacts of one of humanity's greatest follies. 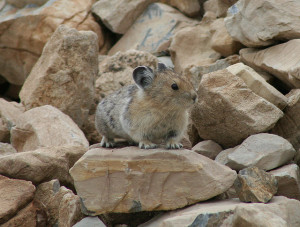 An American pika. Photo by Glacier NPS, used under Creative Commons licensing.
“I didn’t start out doing climate work,” muses Graves, “but as we learned what a big role climate plays in our natural world, it clearly became an important stressor to understand. I was always interested in spatial and temporal processes and climate just drives so many of those processes that potential impacts are clearly huge.”  While bears, having once inhabited a large swath of the continent, may not be as directly sensitive to warming as other cold-dependent species like pikas and polar bears, grizzlies need to eat. A lot. Like us, grizzly bears are omnivores. They graze, they scavenge, and sometimes they hunt.  When food becomes scarce they may range further afield. But the further from the wild they roam, the more likely they are to wind up in conflict with their human neighbors. Says Graves of wildlife managers, “If the conflict is bad enough, they’ll remove it from a population. If a bear breaks into a cabin or keeps people locked in a car—it’s probably got a short life ahead of it. But “very few humans are killed by bears.” If a bear causes a “minor offense” in the park, says Graves, rather than relocation or worse, a trail may be closed. Where bears are active, a warning may be posted, reminding us humans that we are in their habitat. 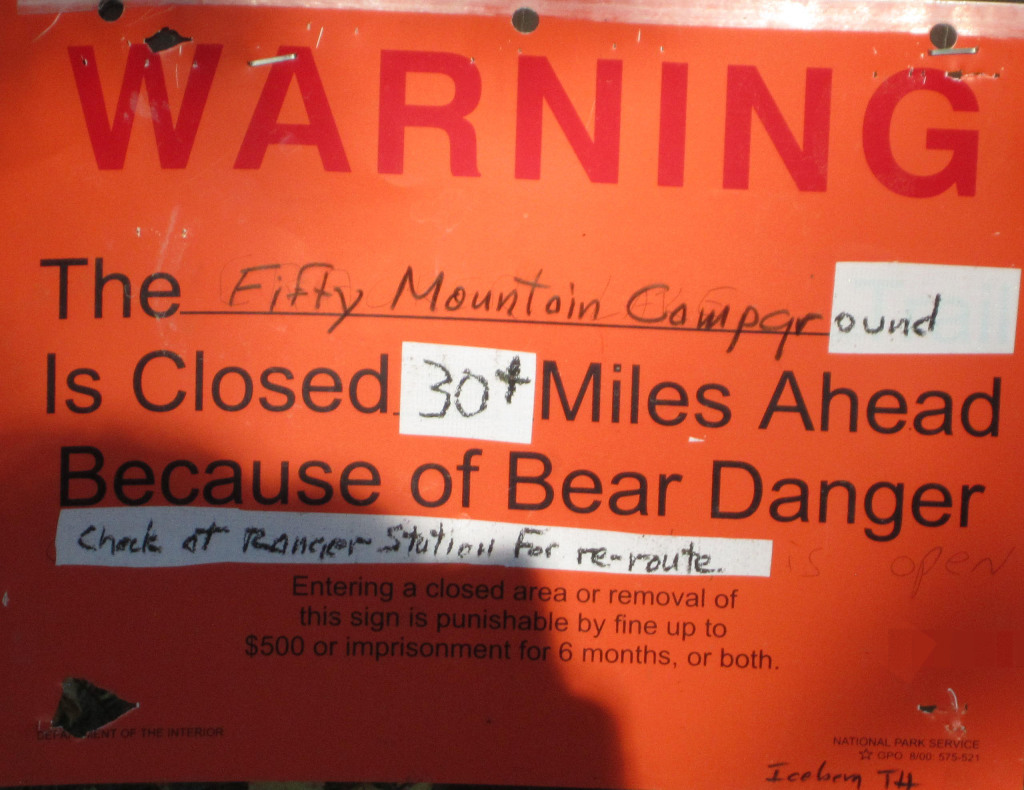 Trail closure sign. Photo by Emily Monosson.
Like an oversized oxymoron, the formidable grizzlies living in the western region of Glacier National Park are mostly vegetarians. “Digging roots is what gives bears their hump,” explains Graves. “It's sort of a combination of evolutionary processes and, as with any muscle, use.” Who would have guessed that one of the more disturbing and defining features of the grizzly, their powerful muscular hump, is for digging roots, grubs, and ants? When they aren’t digging, the bears graze on grasses, shoots, and berries. In West Glacier, huckleberries, a fruit related to blueberries, are one of the largest single sources of nutrition. And this is where climate comes in. 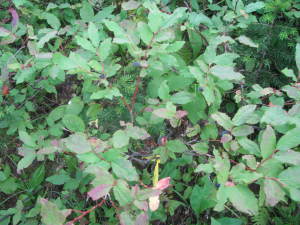 Huckleberries. Photo courtesy Tabitha Graves.
Flowering shrubs and plants around the globe are already responding to Earth’s changing climate. Some are creeping up to higher cooler ground. Others are buffeted by increasingly variable temperature. Where I live in western Massachusetts, blueberry and apple crops were hit hard when flowers bloomed early, only to wilt and die from a more seasonal frost. And then there are the pollinators flowers rely on—how will they respond to variations in temperature? Will a mismatch in emergence and subsequent pollination further reduce fruit crops? How climate change will affect huckleberries isn’t yet known, but there are plenty of potential consequences: early blossoming, swings in rainfall, changing wildfire regimes, and changes in disease and insect patterns—including both pest species and beneficial pollinators. And anything that influences berry production will also affect those dependent on the tart blue fruits. That’s why Graves and her team are looking beyond the genetics of grizzly populations to understand what their fate may be. “We don’t understand what the effects of climate change will be on bear food sources,” says Graves. “Anecdotally, people see huckleberry crops fail and then see increased bear-human conflict. When they don’t have food, they look around more and then tend to come in contact with humans more…that is the concern that started this project for me.” To better understand these connections, Graves and colleagues are now collecting data not only on bear movement but also on factors like huckleberry production and pollinator schedules. 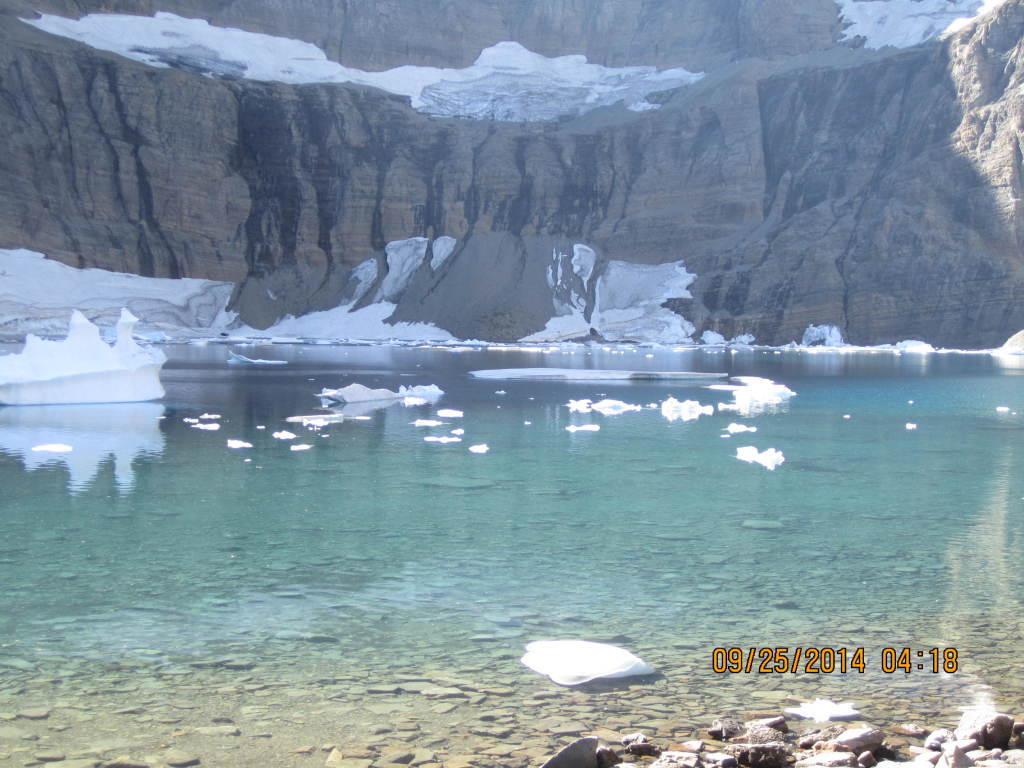 Glacier National Park. Photo by Emily Monosson.
But, even if food availability related to climate change alters bear habits, this doesn’t have to lead to increased conflict, if the bears have the space to move into wilderness. Grizzlies, says Graves, could move north towards Canada along a wildlife “corridor,” which brings us back to the yarn and push-pins, an oddly low-tech approach to data handling in this high-tech mathematical modeling world. “The family tree,” explains Graves, “is a fairly complex network. I wanted to visualize the tree, and understand any odd relationships.” Graves wanted to “get to know the data at a deep level.” Knowing how young rambunctious teenage bears find their way through forests and meadows, around towns and across roads, can help define corridors to protect moving forward. Once defined, maintaining these wildlife corridors may mean the difference between a robust grizzly population and one needing continued human protections, particularly in an age when movement will be essential for both grizzlies and other species that might need to move north to weather the impending climate storm. Whether thanks to those French women or not, we saw nothing more than bear scat and a few tufts of blond hair. Even so, as anyone who has walked in the footsteps of grizzlies knows, just being in the proximity of a being far more powerful than us awakens ancient senses numbed by the daily experience of an overdeveloped world.  Now, we face an overheated world. At the very least we can strive to keep the wild things in the wild; for both their sake, and ours.
biodiversity
climate change
conservation
ecology
forests
bears
population
wildlife