Skip to main content
Home   /   Blog   /   Historic Temperate Rainforest Agreement Down to the Fine...
After 30 years of controversy that tore at the social fabric of Tasmania, the federal and Tasmanian governments of Australia finally signed the Tasmanian Forests Intergovernmental Agreement to provide support and funding that will help the timber industry transition out of native-forest logging and will protect the region’s high-conservation-value rainforests. In sum, the government will provide much-needed financial support for workers and contractors to cease logging native forests while it takes legal steps to protect these forests as formal reserves similar to national parks. Financial support for a major pulp mill, which would have literally chipped away at globally irreplaceable rainforests, will be abandoned due to a prohibition on use of government funds for the mill (for further details, see a discussion on the Wilderness Society, Australia, website). 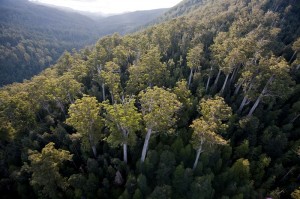 Tasmania’s temperate rainforests are world class. Both the World Wildlife Fund and Conservation International ranked them among the most outstanding rainforests on earth, and several of the proposed high-conservation-value forest reserves are juxtaposed with World Heritage Sites recognized for their importance to global biodiversity. In these rainforests, size matters as they include the largest flowering tree – sweet gum (Eucalyptus regnans) – which can grow taller than a 25-story building and live longer than 400 years, the largest (nearly 1 meter) freshwater crustacean (tayeta), eagle (Tasmanian wedge-tail), and marsupial (the infamous Tasmanian devil). The 477,000-hectare (1.2-million acres) Tarkine Wilderness in northwestern Tasmania is one of the largest intact temperate rainforests in the world and this, among several other areas, would be protected under the agreement. Many of Tasmania’s amphibians, reptiles, birds, and mammals are found nowhere else on earth, and some of the plants have affinities dating back to an ancient landscape when dinosaurs were dominate and continents were joined as Gondwana. Tasmanian rainforests, as well as those on the Australian mainland, also have been crowned by scientists as global champions in storing vast amounts of carbon in massive trees, dense foliage, and productive soils, an amount equivalent to nearly six times Australia’s annual carbon dioxide emissions. Turning rainforests into wood chips for glossy magazines, as previously proposed, would release most of this stored carbon as a greenhouse gas pollutant, impacting threatened species like the wedge-tail eagle. Although the ink has barely dried on this historic agreement, the fight to protect these rainforests is far from over. Conservation groups are busy advocating for specific set asides as additions to World Heritage Sites, support is needed from all political parties of the Tasmanian Legislative Council, reforms are being proposed for plantation management, and there is much-needed private lands conservation work ahead. Should all go as planned, the Tasmanian agreement will be hailed as a global model in efforts to save these remarkable but forgotten rainforests. In the weeks ahead, I will be drafting a scientist sign-on letter thanking Australia’s prime minister and Tasmania’s premier for their commitments to the agreement and requesting the designation of high-conservation-value forests identified by conservation groups as new set-asides. Stay tuned! Sources: Australia’s temperate rainforests store about 300 metric tons per hectare (Keith, H., B.G. Mackey, and D. B. Lindenmayer. 2009. Re-evaluation of forest biomass carbon stocks and lessons from the world’s most carbon dense forests.  Proceedings of the National Academy of Sciences 106 (28):11635-11640). Carbon dioxide emissions were obtained from the United Nations data source on emissions (2007). Dominick A. DellaSala is chief scientist and president of the Geos Institute in Ashland, Oregon, and president of the North American section of the Society for Conservation Biology.  He is the author of Temperate and Boreal Rainforests of the World: Ecology and Conservation.
conservation
forests
logging
rainforests
wildlife