Skip to main content
Home   /   Blog   /   How Did the Grizzly Bear Cross the Road?
Reposted from Cristina Eisenberg's blog at the Huffington Post with permission. It all began with roadkill. Banff, the crown jewel of the Canadian national parks, is a paradox. Big, primeval wildness and all it embodies—peaks, waterfalls, and glaciers—surround the townsite, the antithesis of wildness with its bustling boutiques and hotels. Highway 1, one of the busiest Canadian roadways, slices through the park via the Bow Valley. It vectors millions of people and their vehicles through this iconic landscape, creating a lethal corridor for wildlife. Indeed, in the 1970s animals died so frequently here that people called the highway the "meat maker." To reduce roadkill, the federal government and Parks Canada created the Banff Wildlife Crossings Project. This ambitious project involved fencing the 50-mile corridor between Canmore and Lake Louise along Highway 1 and building many wildlife crossing structures. The fencing prevents wildlife mortality on the highway, and the crossing structures create a connected landscape for animals. 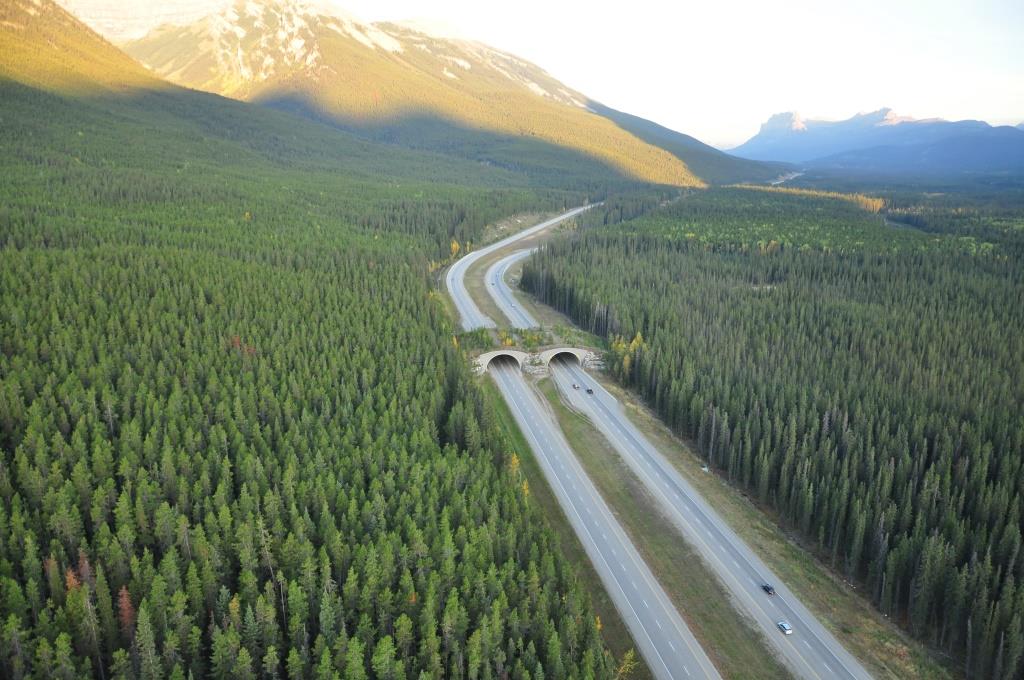 Photo courtesy Parks Canada.
Since the 1990s, Dr. Tony Clevenger has been guiding this project. Built in four phases, when completed in 2013, this project totaled 60 crossing structures (39 underpasses, six overpasses, and the rest culverts). Other notable highway corridor ecology projects inspired by this include the Highway 93 mitigation in Montana and the Tijeras Canyon Highway 40 mitigation in New Mexico. I visited the Banff crossing structures with Steve Michel, a Parks Canada human-wildlife conflicts officer. We pulled over on Highway 1, west of the Banff townsite, at the paired Wolverine Overpass and Underpass. Through a gate in the fence, Michel took me into a haven-like world. Outside the fence, vehicles hurtled by everything from motorcycles to semi-trucks that shook the ground with their passing. But as we walked onto a grassy apron to the top of the overpass, the deafening traffic noise subsided. We'd entered a world far safer for wildlife than the pavement and metal below. 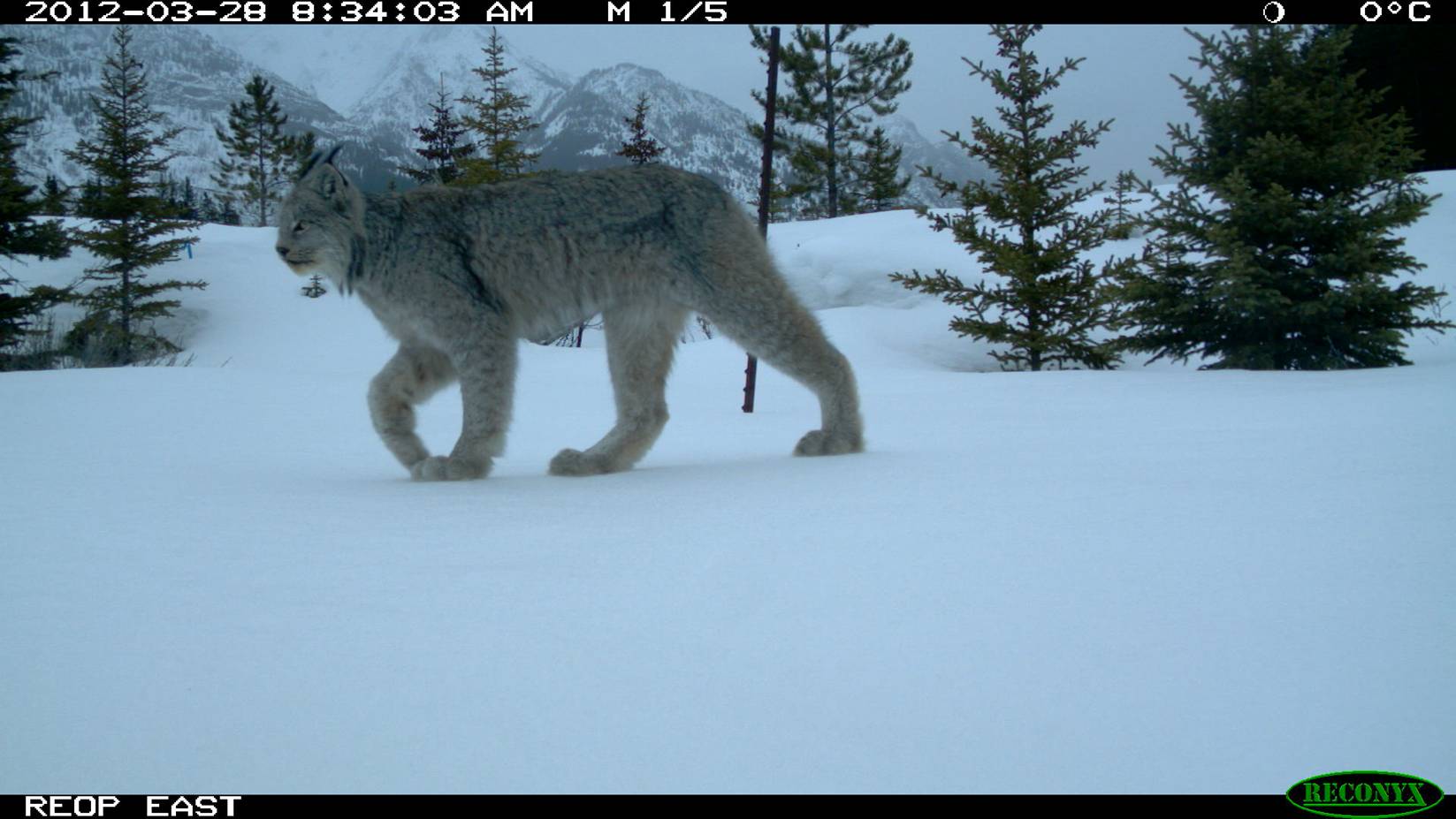 Photo courtesy Tony Clevenger.
This inviting living landscape had multiple levels of native vegetation, game trails, and abundant wildlife signs—piles of elk pellets and berry-laden bear scats. Michel pointed out a trail camera aimed at one of the more prominent wildlife trails, positioned to collect data about who was using the overpass. He deftly evaded the camera as he guided me back down. Next, we clambered over shrubs and deadfall 20 yards west, to the Wolverine Underpass, an elliptical concrete tunnel 13 feet high and 23 feet wide. As I entered this underpass, the traffic noise receded, and I gasped in wonder. The dim, slanting light that entered the tunnel illuminated hundreds of deer and elk tracks pressed into the bare earth. The tracks provided eloquent testimony of this structure's effectiveness. 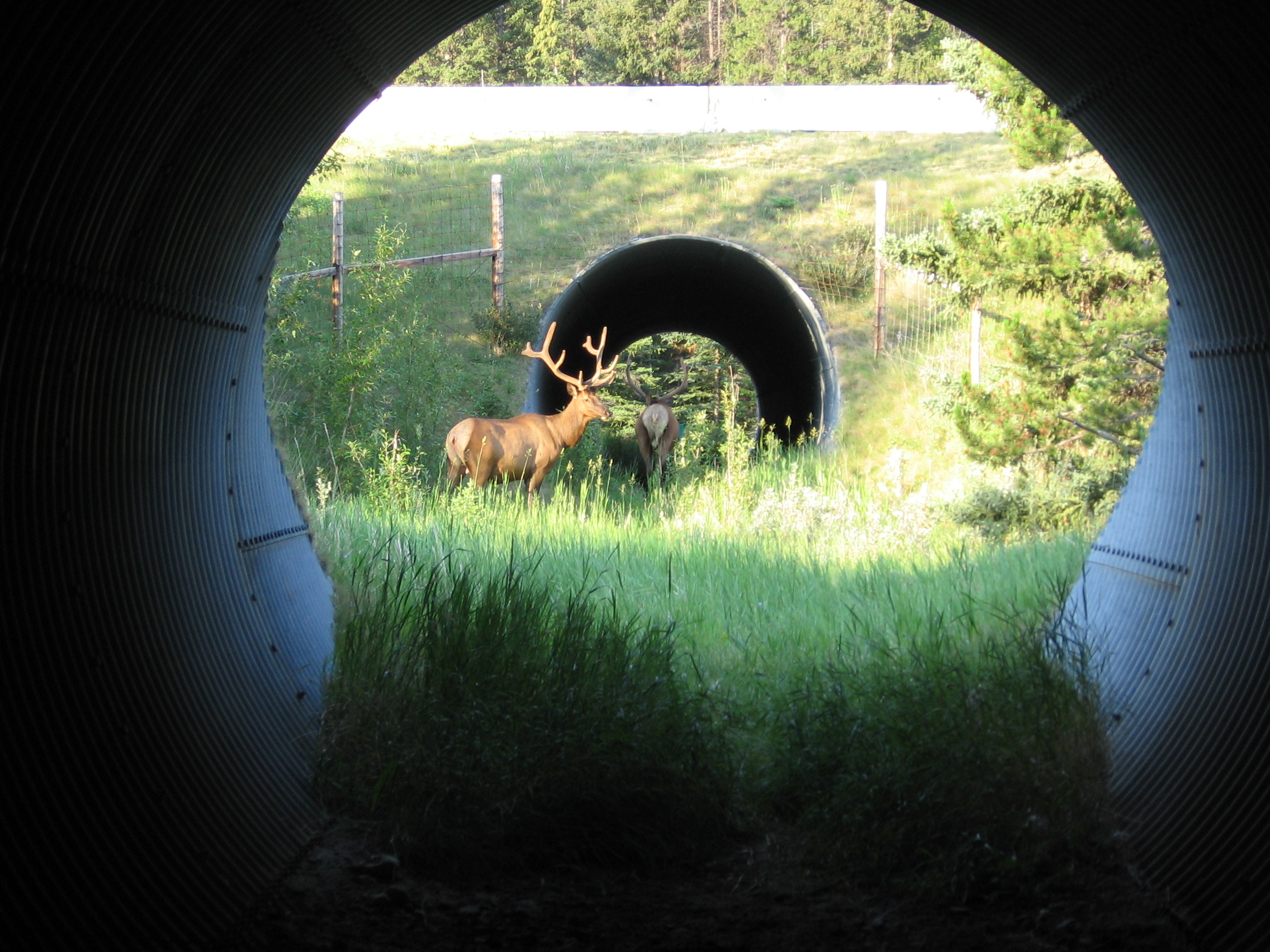 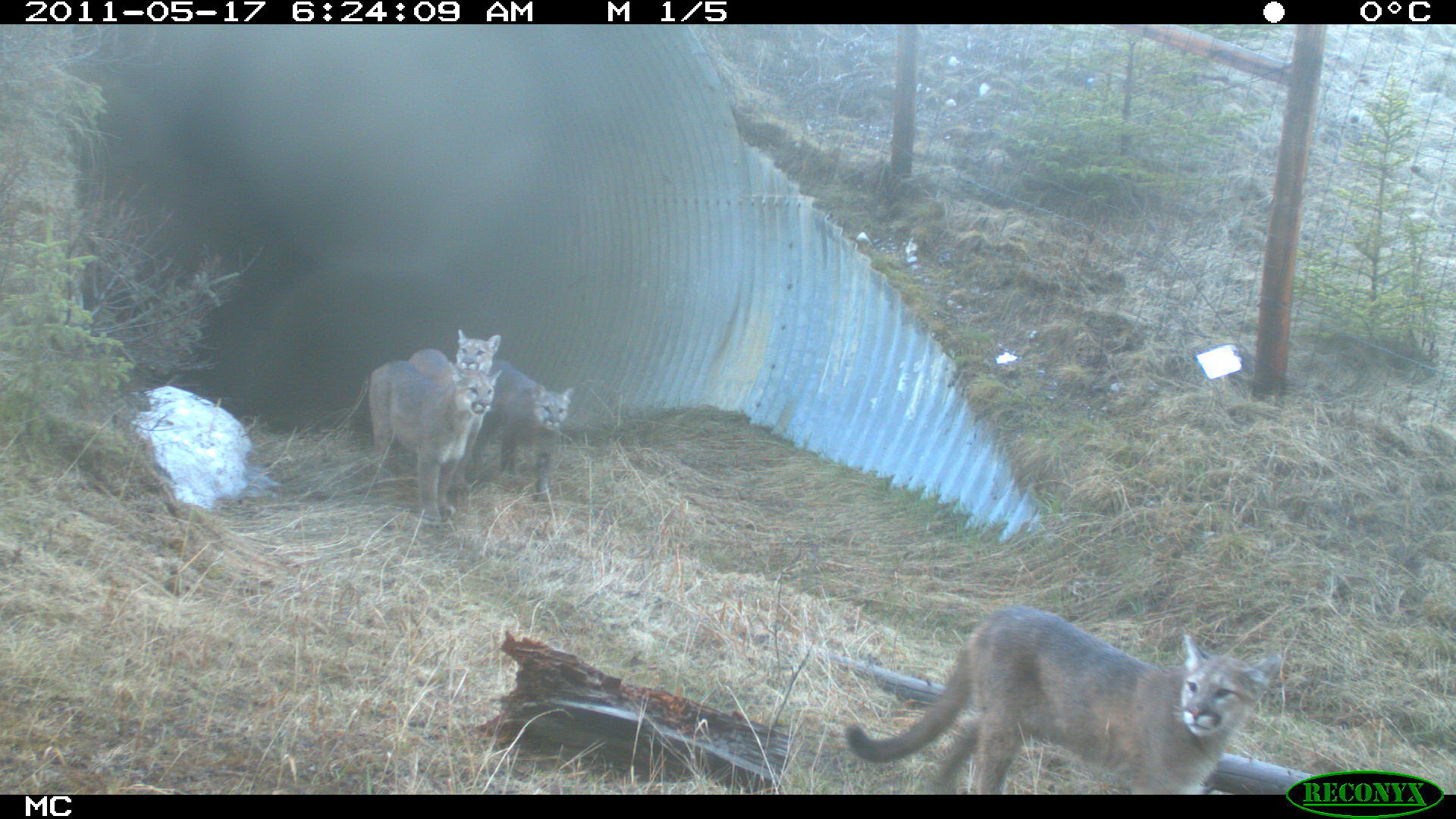 Photo courtesy Tony Clevenger.
The grizzly bear, which is threatened in Alberta, became a focal species for the study. After the first five years, there were over 100 grizzly bear crossings annually. However, skeptics believed that all these crossings were being made by one bold male rather than by the whole grizzly population. To learn if this was so, Clevenger and graduate student Mike Sawaya did a DNA study. For three years, they snagged bear hair with barbed wire positioned at the structures. Each year, they found a dozen male and female grizzlies using the crossings, in an even gender mix. 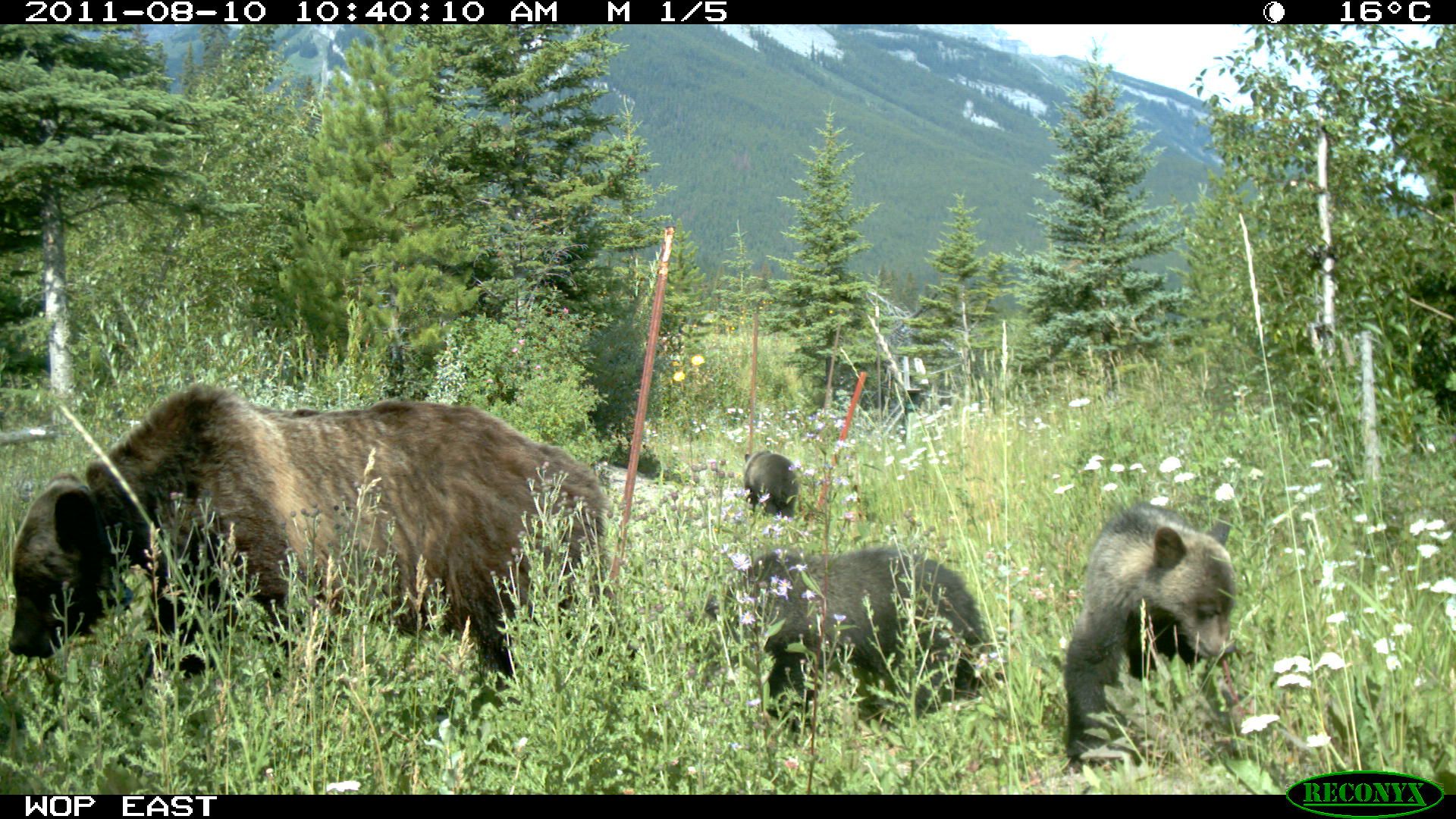 Photo courtesy Parks Canada.
Clevenger also learned a powerful lesson about the value of long-term monitoring. While it took ungulates four to five years to adapt to using the structures, it took large carnivores six to nine years. Had Clevenger only monitored for two years (as is common in most studies due to funding limitations), he would've concluded that the structures weren't working for grizzly bears. 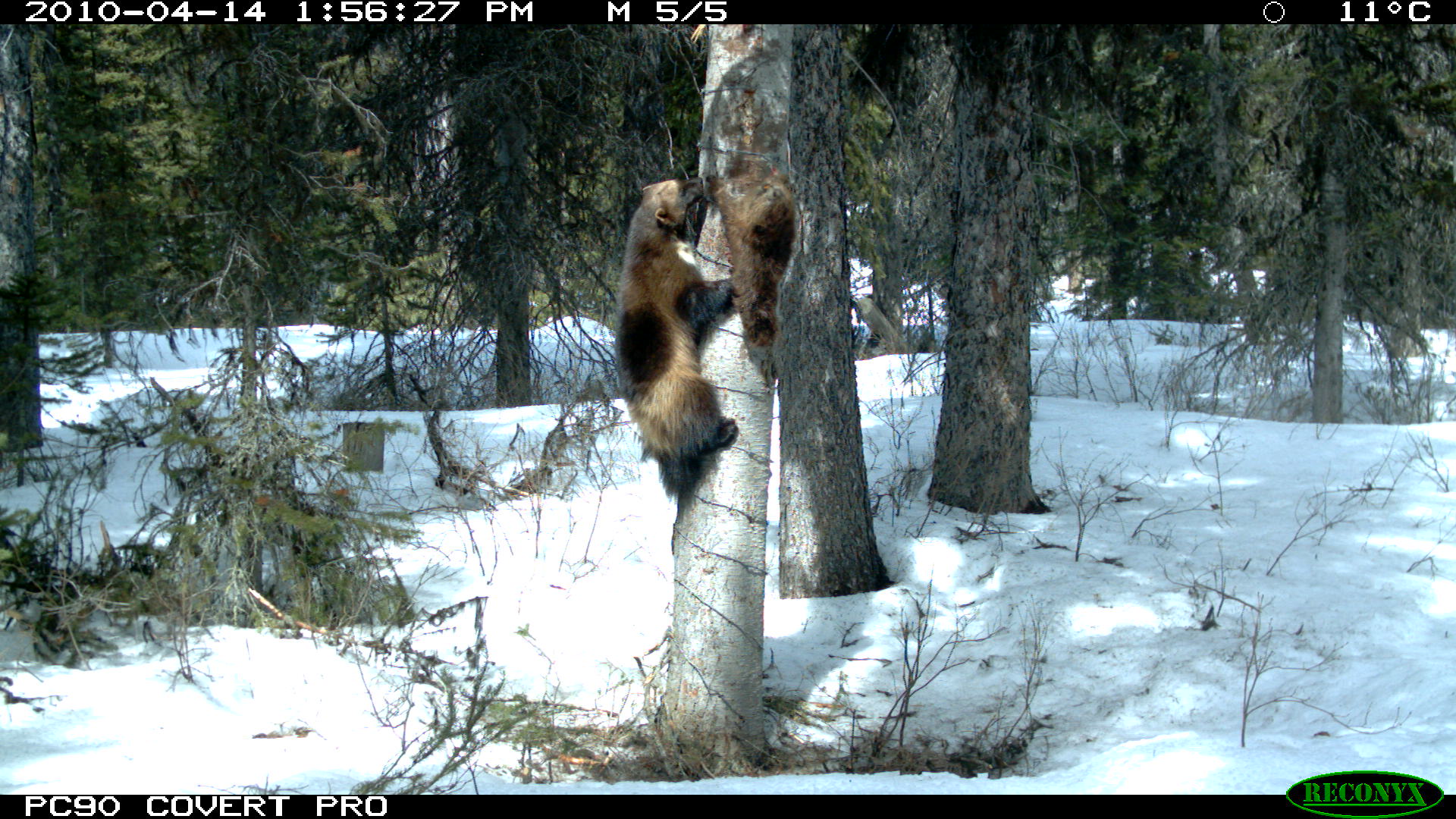