Skip to main content
Home   /   Blog   /   Imagination + Visualization = Approval?
Austin’s streetcar proposal has been burning up the transit headlines recently, and for good reason. After years of planning, the first leg of the route has finally come into focus, ready for approval. But there is contention. Not so much with the route choice, but whether Austin needs a streetcar in the first place. As to be expected, most of the objection is coming from motorists; folks who simply cannot imagine themselves using transit. People—especially non-transit users—have a difficult time visualizing transit. Transit is a service with a certain degree of intangibility, which makes it difficult to gain voter approval. This is a point pro-transit conservatives William Lind and the late Paul Weyrich make in their book Moving Minds: Conservatives and Public Transportation. Lind and Weyrich contend voters are reluctant to approve something they cannot grasp. And for the vast majority of American motorists today, transit is an unknown quantity. 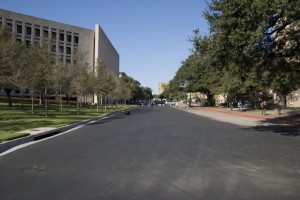 Street through University of Texas-Austin campus

Here is where urban designers can help. Through visioning, we can show people what transit can look like in their city; give them something they can relate to. In other words, designers can give transit positive tangibility. Transit should be something that excites people, something they want to use. At the very least, transit should be something that enhances the character of their city even if some citizens choose not to use it. The essence of enjoyable transit is a compelling environment. Regardless of technology choice (e.g. bus, streetcar, or light-rail) the space within the transit vehicle, the streets it runs along, and the places you wait for it have to be enjoyable places to spend time. That means transit has to be comfortable and safe, but also offer a measure of pleasure, even delight. At an annual Congress for New Urbanism in Austin, I had the good fortune to meet Sinclair Black, a well-respected local architect, University of Texas professor, and lover of his city. We chatted about what was then a burgeoning streetcar proposal that would connect the downtown, Capitol and the University of Texas campus. We then talked about the power of visioning exercises to help citizens better understand changes to their environment. This works great when discussing density for example. (Show folks a couple of high-rise towers in their neighborhood and you can bet with almost 100% certainty they will reject the idea. But show them modest two- or three-story townhomes over a larger area, and many find such a development attractive). I did a quick rendering, illustrating that dreary public space can be found even on an otherwise beautiful college campus. And that these lackluster places can be enhanced with transit. This type of concept, when shown even to non-transit riders, brings an easy smile, because it is an environment we prefer to what is there now. It improves the character of the campus, and promises a more delightful experience, regardless if you are a passenger or pedestrian.
planning
transit
transportation