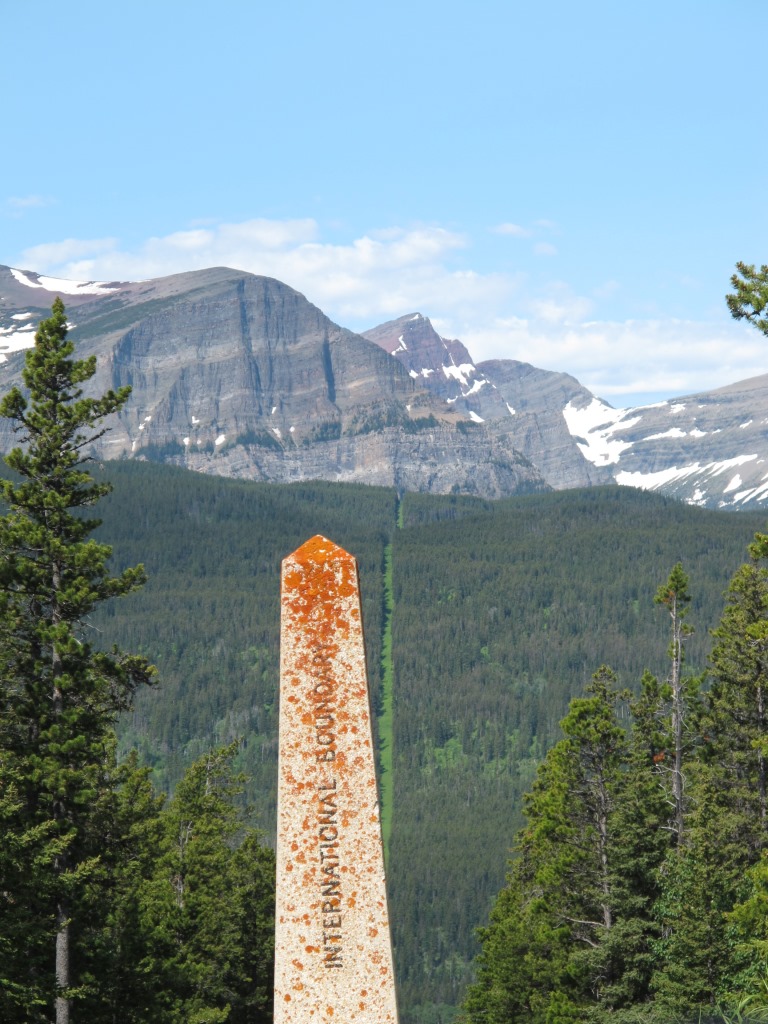 US-Canada border. Photo by Cristina Eisenberg.
In the mid-2000s, I began doing research on wolves in Waterton-Glacier International Peace Park. This peace park is composed of two national parks: Glacier National Park in the US and Waterton Lakes National Park in Canada. Glacier, established in 1910, comprises one million acres. Waterton, established in 1895 as a forest preserve, comprises 124,000 acres contiguous to Glacier. One hundred and seventy such peace parks exist worldwide, but Waterton-Glacier was the first. Dedicated to protecting biodiversity and natural and cultural resources, peace parks help maintain connectivity across boundaries. In 1995, the United Nations designated Waterton-Glacier a World Heritage Site. At the Chief Mountain port of entry within this park, a granite obelisk and narrow clearcut demarcate the border crossing and provide a strong reminder that legal boundaries are very real in terms of land management and for the large carnivores who cross them regularly. Policy expert Charles Chester defines transboundary conservation as international policies that focus on borders that present conservation challenges. Within the context of carnivore conservation, issues along these borders have to do with the fact that nations share resources but don’t always agree on how to manage the living species that they share. The grizzly bear (Ursus arctos) provides a good example of how Canadian and US environmental laws can be applied across provincial and international borders. In the US, the grizzly bear has federal “threatened” status, conveyed via the Endangered Species Act, which means grizzlies can’t be hunted or harmed. In Canada, the Species at Risk Act (SARA) prevents extinction and provides for species recovery and management. Here, SARA has given this species “at risk” status. However, the strongest protection can be provincial. In British Columbia, a grizzly bear can be hunted, while in Alberta, this species has provincial “threatened” status, so hunting it isn’t allowed. 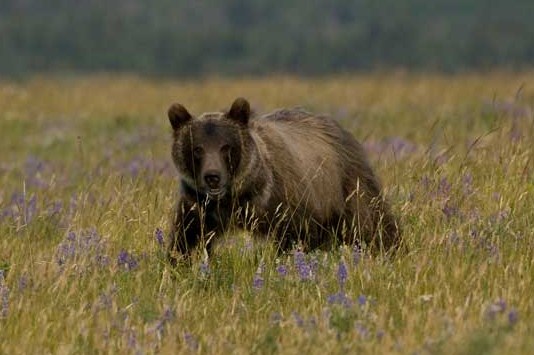 Grizzly bear, Waterton Lakes National Park. Photo by Rod Sinclair.
Like other carnivores, the grizzly covers a lot of ground. Let’s say that a four-year-old male grizzly is born in northwest Montana. During the first few years of his life, he has total protection and can ramble about freely without worrying about meeting a bullet, as long as he doesn’t get into people’s food or kill cattle. But at the beginning of his fourth year, he awakens from hibernation and leaves to get away from some of the adult male bears who’ve begun to pick on him. He travels through the North Fork of the Flathead Valley, in Glacier National Park, toward Canada. When he reaches the US-Canada border, he has several options. If he goes north or west, he’ll find himself in British Columbia, in more big mountains. If he goes east, he’ll find himself in Alberta, in Waterton Lakes National Park, which quickly turns to privately owned grasslands managed as ranches. Although he doesn’t have any awareness of the legal nuances involved in his choice, his travel route could mean the difference between life and death; in Alberta grizzly bears are strictly protected, while in British Columbia they can legally be hunted. The policy implications of this young grizzly bear’s life choices demonstrate the power of environmental laws to shape animal lives. Environmental laws in the US and Canada are a big part of why we still have large carnivores roaming remote mountain valleys, but they provide an imperfect safety net, due to differences in management objectives. Additionally, both nations are in the process of proposing to remove grizzly bear protection, despite lack of scientific consensus about whether this species has recovered. In order to conserve carnivores, we need to work together across borders using best science. Non-governmental organizations such as Yellowstone 2 Yukon (Y2Y) and Wildlands Network are doing much to advance transboundary carnivore conservation. Every time I see a grizzly bear I can’t help but wonder about the fate of others of his kind who routinely cross borders. Long may they roam, and long may we maintain the legal framework to enable their full recovery.
biodiversity
Canada
conservation
ecology
endangered species
extinction
forests
bears
Montana
policy
science
wildlife