In this installment, Jennifer L. Gorfine, Social Media & Web Intern, writes about how individuals and organizations united on Twitter over an unlikely subject.

Like my predecessor, I, the current Social Media & Web Intern, spend a great deal of time on Twitter. When I’m not bragging about our authors’ accomplishments, I’m perusing our home feed and relaying significant environmental news to readers like you. It is my goal to find pieces that are altogether related to Island Press' five core areas, current, thought-provoking, and dynamic. Finding something that meets the first three criteria is easy. However, finding something that meets the fourth criterion is a bit harder. Once in a while, though, something does cause a stir. My first “something” was just about the last thing I would have predicted: a fish. More specifically, it was a seemingly-ordinary little fish I had never heard of before called the menhaden.

The menhaden. Photo by the Menhaden Defenders.
On December 14th, 2012, having received “over 120,000 comments…submitted by concerned citizens,” the Atlantic States Marine Fisheries Commission (ASMFC) was finally going to hold a meeting to determine the fate of this important and threatened fish. The vote’s outcome was going to answer two urgent questions: what is an appropriate amount by which the ASFMC could reduce the menhaden catch total?; and, more importantly, should there be a reduction in the menhaden catch total at all? In the days leading up to the vote, many individuals as well as organizations advocated for the menhaden on Twitter. The Public Trust, for example, shared a compiled timeline of menhaden activism to contextualize this momentous vote. One of the milestones featured was the 2008 release of Bruce Franklin’s book, The Most Important Fish in the Sea. The Public Trust said, “the book's success raise[d] critical awareness about the importance of forage fish like menhaden to ocean ecology.” Guess who published The Most Important Fish in the Sea? Island Press did. 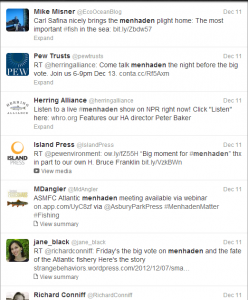 Island Press gets in on the #menhaden conversation.
And guess who, on behalf of Island Press, participated in the major menhaden conversation that was rapidly unfolding on Twitter? I did. December 14th, the day of the vote, was the day Twitter support for the menhaden peaked. By monitoring all the tweets marked with the menhaden hashtag, I essentially was reading a real-time transcript of the ASMFC vote. Many users posted important observations and updates (and opinions) from within the meeting the moment they happened. Though I wasn't physically present at this meeting, I definitely felt like I was there. By the end of the day, I was informed that the ASMFC voted to enforce a 20% catch menhaden catch limit. It was the kind of decision for which the Twitter community, comprised largely of The Most Important Fish in the Sea readers, was hoping. For me, this whirlwind experience was extremely refreshing. It proved that Twitter is more than just a place for someone to proclaim his or her every thought on a whim: it is a channel for informative and constructive conversation. Furthermore, the experience reminded me that even though Island Press' daily tweets are fleeting, its carefully-crafted books are enduring --and enlightening. Finally, it taught me I mustn't become frustrated when I don't discover dynamic news; after all, significant positive change in environmental policy -- or in the environment itself, for that matter -- usually takes time. Just look at the menhaden catch limit: it took years for it to become realized! But thanks to the determination of organizations like Island Press, change for the better, such as the enforcement of a menhaden catch limit, ultimately does take place.
interns
menhaden
social media