Skip to main content
Home   /   Blog   /   On Interning at Island Press: Environmental News from an...
In this installment, Web and Social Media Intern Trevor Anderson, discusses receiving environmental news from an unlikely source. As a young graduate student, I am no stranger to social media. Like many others my age, I am an avid Facebook user, and am addicted to such apps as Instagram and Snapchat. In the words of Dr. Evil, “I’m with it. I’m hip.” However, Twitter, was one social networking site I avoided like the plague. In my mind, this site only served as a way for people to proudly share their every thought, and to insatiably feast further into the lives of celebrities. Boy was I wrong. I wanted to intern at Island Press as I share the organization’s passion for providing the best ideas and information in the environmental field, so as to help develop solutions to the complex and pressing environmental problems facing our world today. Prior to my time at Island Press, I did, unfortunately, have some experience with Twitter, as I was required to use the social network in a professional setting at a previous internship. This was still only on a very limited basis. But now, at Island Press, as the Web and Social Media Intern, naturally, I frequently came face to face with the very site I swore to evade. Many of my tasks included composing daily “tweets” to endorse the organization’s books, events, authors, blogs and promotions, and I also regularly crafted tweets covering current and breaking environmental news. It was in this chore, that I discovered, to my disbelief, an essential and rewarding purpose of the site I once believed to be merely for tabloids and gossip. While I do have an innate love of nature, and enjoy reading or hearing about the latest environmental news, as a graduate student going for my MS degree in Sustainability Management at American University, I also often am required to present and discuss current environmental news in my classes. Through my internship at Island Press, I learned that today, there is no place better to go to, for your most up to date news, than Twitter. This was especially useful to me, as I feel environmental bulletins are all too commonly overshadowed by other stories. No longer do I have to go digging through the New York Times, or have to conduct a search on Google, to find environmental headlines. By following such groups as the NRDC, HuffPost Green, Rainforest Alliance, and Climate Desk amongst several others, I could simply login to my Twitter account, for business or pleasure, to access my own personally created environmental newspaper. Now, I am constantly overwhelmed with a plethora of environmental news on a variety of topics, that is literally updated by the minute, and that I otherwise would have gone without seeing. Not only has Twitter opened the door for me into this seemingly secluded world of environmental news, but it has also and perhaps more importantly, given myself, and others like me, a voice. Granted, this was part of the reason I stayed away from Twitter for so long, but in the world of environmental protection, getting one’s voice heard is often a difficult, if not impossible, task. I find it very enlightening that Twitter functions as a place where individuals and organizations can come together to raise their concerns about the environment and to press for action. It is encouraging to see that, even though it is only Twitter, there are several others out there who feel similarly and just as strongly as you do about the environment. It gives hope to the notion that maybe if enough people share their opinions, progress will actually be made in the environmental arena. During my time here at Island Press, while I may have enhanced my writing, editing and emailing skills, I am really thankful for learning an abundance of new web and social media skills. My supervisor Jason is one of the most knowledgeable web content users I have ever known. He has taught me a great deal about improving web design and social media posts, and has made my work as an intern feel valued and appreciated. To conclude, if you ever feel you can’t have an impact as an intern, or that your voice may never be heard, let it be known that after my first two weeks as the Web & Social Media Intern at Island Press, and thus after only my first real two weeks of using Twitter, I had a “tweet” “retweeted” by Al Gore’s the Climate Reality Project (@ClimateReality), as shown below. 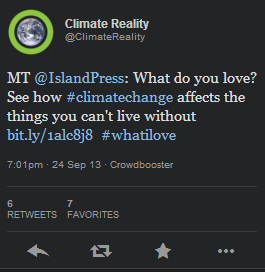 I then found out that "MT" technically stands for "Modified Tweet" as opposed to "RT", which stands for "retweet". Nevertheless, this was personally my greatest interaction with social media so far, and shows that if even I can get heard on Twitter, than anyone, even if you’re only an intern, can get their voice heard, and make an impact.
environment
interns