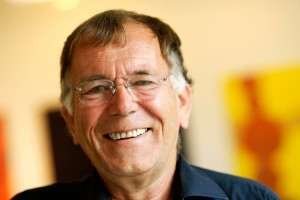 Jan Gehl, author of the popular book Cities for People, talks about cars and traffic in Moscow in a New Yorker piece by Sally McGrane: When Jan Gehl looks at Tverskaya, Moscow’s broad main street, whose decorative Stalinist blocks and Art Nouveau department stores lead straight toward the Kremlin (thanks to Joseph Stalin, who tore down churches and moved larger edifices aside to take the bend out of the venerable roadway), the Danish urban-planning guru sees cars parked on the sidewalks. He sees pedestrians hurrying along the narrow strip left between Range Rovers’ fenders and the buildings’ large shop windows. He sees women in high heels. He sees asphalt.
“It’s a general problem, here,” said Gehl, who was hired last year by the city of Moscow for advice on how to make its public spaces more attractive. “There is very little space left to walk. Freedom from Communism means the freedom to park everywhere.” Gehl, who is often, though erroneously, said to have coined of the term “Copenhagenization” to describe bringing Danish-style city living to the rest of the world, had just flown in from Copenhagen to meet with city-planning architects and to give Sergei Sobyanin, Moscow’s mayor, a status update—which he did over dinner, in a tête-à-tête joined only by the mayor’s beautiful translator. “I think there is a strong wish to change, a general agreement that they cannot continue to accept that the city is completely inundated, ruined by all this car traffic,” said Gehl, over breakfast at the Metropol, an opulent, slightly haunted-feeling turn-of-the-century hotel that housed members of the Bolshevik government after the Revolution before reverting to its original role in the thirties. “The love affair with the motorcar is much newer here,” Gehl continued. “They’ve only had them for twenty years and are madly in love. You have to get over youth to start to have more mature relationships, whatever you are loving.”
Read more
cars
planning
traffic
planning