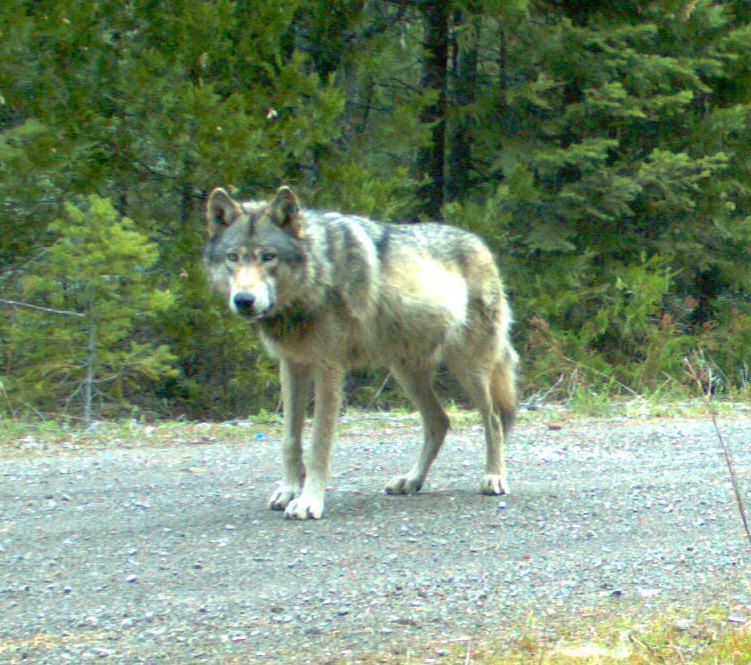 Remote camera image of wolf OR7, nicknamed Journey, in southwest Oregon, May 2014. Photo courtesy of Oregon Department of Fish and Wildlife.
Deep in her Oregon Blue Mountain den, the Imnaha pack’s alpha female whelped pups in April 2009. One pup, a gray male wolf (Canis lupus), would eventually grow up to become a hero. Nearly two years later, he stepped into a non-lethal trap set by the Oregon Division of Fish and Wildlife (ODFW). Biologists immobilized him with drugs, carefully fastened a GPS collar around his neck, and gave him a name: OR7. He awoke dazed and confused, quickly recovered from the drugs, and rejoined his pack. The collar proceeded to record and transmit OR7’s location several times daily, enabling ODFW to track his movements. Animals use a process called dispersal to leave their natal range, find a mate, and claim their own territory. In September 2011, like many young wolves, OR7 left his birth pack. He began to cover a remarkable amount of Oregon territory, moving toward the Southern Cascade Mountains. ODFW posted images of his walkabout, which showed up on their maps as a thick, black zigzagging line. Popularly dubbed Journey, this wolf drew enormous public attention as he wandered around the state in search of a mate. Often he looped and doubled back on his trail, but each week he trended farther south. Just before Christmas 2011, he reached Crater Lake in southwest Oregon. After Christmas a public question arose: how far south would this vagabond wolf go? Some wondered whether he was looking for love in all the wrong places. Right before New Year’s Eve, the public got their answer to the first question. Journey entered California, becoming the first wolf confirmed in the state since 1924. For the next fifteen months he stayed in Northern California and out of trouble. He preyed on mule deer (Odocoileus hemionus) and left livestock alone, but failed to find a mate. In mid-March 2013 Journey returned to southwest Oregon, where he remained until nearly the end of that year. Then in December and January, he made several jaunts back to California, as if trying to decide which state to claim as home. In response to Journey’s activity, the state of California collaborated with stakeholders and conservation groups to consider putting the wolf on the state endangered species list and create a wolf management plan. By late spring 2014, Journey had travelled thousands of miles since leaving his birth pack. He’d traversed highways, mountain ranges, and deserts. Amazingly, in the process he’d managed to avoid starvation and being shot accidentally or deliberately by humans. 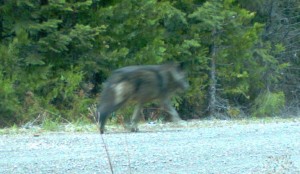 Remote camera image of OR7's possible mate, southwest Oregon, May 2014. Photo courtesy Oregon Department of Fish and Wildlife.
In April 2014 Journey’s collar fixes converged in Oregon’s Southern Cascades. And in early May, US Fish and Wildlife Service (USFWS) remote cameras recorded several images of a black female wolf in the same location as Journey. The tight cluster of points from Journey’s collar led USFWS to conclude that he may have mated with her and denned, making them the first breeding pair in southern Oregon since humans had driven wolves to extinction there in the early 1900s. Journey’s story has become a conservation legend that makes us wonder how many other such dispersals there have been, and what sort of outcomes they have had. Not all dispersals have happy endings. Like wolves, wolverines (Gulo gulo), cougars (Puma concolor), jaguars (Panthera onca), lynx (Lynx canadensis), and grizzy bears (Ursus arctos) often disperse. In doing so, many meet death by being road-killed or by being mistaken for another species and shot. So how can we create more positive outcomes for them? Monitoring carnivore populations with GPS collars can help identify important migration corridors and keep them open. Proactively posting disperser locations, albeit with a time lag to prevent people from finding them, can build public acceptance. Conservation-oriented management plans can help keep animals such as Journey alive. His travels provide us with a powerful lesson and an opportunity to get things right for him and other dispersing carnivores.
biodiversity
California
connectivity
dispersal
pacific northwest
population
wildlife
wolves