Skip to main content
Home   /   Blog   /   Large Carnivores and Continental Conservation
It’s not exactly safe to be a wolf in Colorado. If you cross paths with the wrong human, you could end up dead. Indeed, for one year those of us working on the High Lonesome Ranch, a privately-owned, mixed-use property managed for conservation, referred to these peripatetic members of the dog family, who were naturally returning to this landscape after being extirpated 80 years earlier, as "visitors from the north." That phrase was our code to protect the wolves. 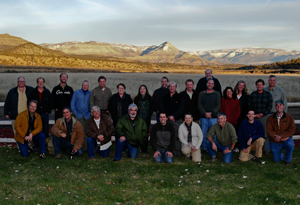 In November 2010, the Society for Ecological Restoration (SER) and conservation organization Wildlands Network (WN) convened what amounted to a small village of scientists, managers, and conservation leaders on the High Lonesome Ranch in DeBeque, Colorado, to exchange ideas about reconnecting and rewilding fragmented landscapes and to explore the vital importance of private lands in these efforts. The principal ranch owner, Paul Vahldiek, Jr., hopes that his management of High Lonesome will serve as a land ethic blueprint for private lands. Vahldiek is using his ranch to demonstrate how reframing our human relationship to nature. The High Lonesome Ranch comprises a sublime, 300-square-mile hunk of north-central Colorado on the west slope of the Rocky Mountains. Its rugged, aspen-crowned mountains and deep river valleys hold healthy deer and elk herds and provide a haven for cougars, black bears, coyotes, and more. Threatened and endangered species returning here include wolf, wolverine, and lynx. Why is this land such a carnivore magnet? Perhaps because it lies squarely in the center of the Spine of the Continent—a 5,000 mile-long wildlife corridor that extends from Alaska to Mexico along the Rockies. Or maybe because this ranch the size of a large national park gets far less human use than most parks. Why focus on private lands? Because national parks and other reserves are mere postage stamps in a matrix of mixed-ownership lands subject to hunting, ranching, timber harvest, and energy development. Thus, private land conservation can do much to help mend fragmented landscapes. And why a continental scale? Because critical corridors, such as the Spine of the Continent, will enable nature to continue to function well by helping restore species, such as wolves, that have a powerful effect on whole ecosystems. They also provide pathways for animals and plants to shift to higher elevations as our climate changes. Keith Bowers, WN president, opened the workshop by voicing the need to place ecological restoration within the context of permeable, large landscapes to ensure the wellbeing of animals like wolves, cougars, lynx, and wolverines that travel far. But according to workshop organizers Conrad Reining of WN and Bill Havorson of SER, we can’t achieve continental-scale conservation without addressing local problems, like the invasion of a non-native plant species into a town park. They proposed creating a primer to guide conservation on both local and landscape scales and inform policies that can lead to international restoration. Landscape ecologists David Theobald and Pete David presented compelling models of wildlife-linkage hotspots, like southern Arizona, where young male cougars dispersing near human communities often meet death on busy highways. Yellowstone-to-Yukon (Y2Y)’s Wendy Francis shared how wildlife overpasses and underpasses in Banff National Park are enabling grizzly bears to survive heavy traffic. These safe crossings provide graphic examples of how local-scale efforts embedded strategically amid vast wildlife corridors, such as the Spine of the Continent, can lead to continental-scale conservation. The SER/WN continental conservation workshop on the High Lonesome Ranch provided a wellspring of ideas for healing small and big landscapes. As we work individually to restore nature, we will turn these ideas into reality supported by the vibrant network of people the workshop created.