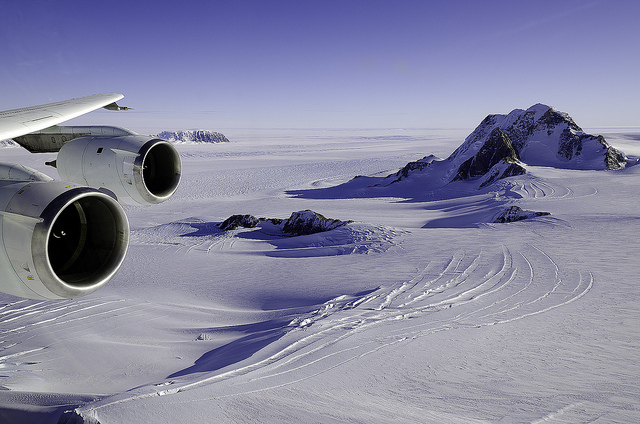 Admiral Richard E. Byrd named this region of Antarctic Marie Byrd Land for his wife during a 1929 flight to the South Pole. In March, a fan wrote to The New York Times suggesting the newly discovered Pluto be named after him because both 'penetrate obscurity.' Photo by NASA/Goddard Space Flight Center, used under Creative Commons licensing.

Editor's note: To commemorate Veterans' Day, please enjoy the below excerpt from Alone: The Classic Polar Adventure by Admiral Richard E. Byrd, in which he describes his feelings on leaving his men and the base at Little America to spend the Antarctic winter of 1934 alone taking weather readings from Advance Base, at 80°S latitude. I was up all night rearranging my affairs. It was not as easy as I pretended. My break with the interlocking conveniences and practices of normal life would be clean and sharp and irrevocable. I had moments of heart-sinking doubt, particularly when I visualized what might happen to my family if I should fail. And this alone gave me pause. As to the moral aspects of my leaving fifty-five men leaderless at Little America, that did not trouble me a bit. My officers had a comprehensive idea of what was expected of them during my absence. We talked almost steadily from midnight to dawn. In charge, with the title of Second-in-Command, I put Dr. Poulter, the Senior Scientist. He is a physical giant of a man. Though attuned to the quiet of the university campus, he had the practical judgment and intellectual balance which are indispensable for the leadership of men who like to call themselves men of action, as if by that they put themselves beyond the penalties of rashness. Poulter would have under him a hard-bitten crew who were well able to take care of themselves. Misery Trail had toughened and schooled the new men as no other experience could have done; with them was a hard core of veterans of my other expeditions. Haines, the Third-in-Command, was serving on his third polar expedition, as was Demas. Noville, the executive officer, had served under D'Annunzio during the war, had been a Superintendent of the Air Mail, and had been with me on the North Pole affair and the transatlantic flight. June, whom I appointed Chief of Staff, had flown with me across the South Pole. Bowlin, the Second Pilot, had been in the Navy sixteen years. Innes-Taylor had dueled with Zeppelins in London's wartime skies, and trekked the Yukon for the Royal Canadian Police. Siple, who was a scientist and trail party leader, and Petersen, who was a first-rate photographer, radio man, and skier, had proved their worth on the previous expedition. Von der Wall, another Navy man, knew what it was like to be torpedoed in the Atlantic Ocean, and Bob Young, another veteran as well as a retired British naval rating, had fought in the Battle of Jutland. And Rawson, though the youngest of the lot, knew what it was all about from four voyages into the Arctic. There were these and others like them. To these men I could entrust the winter destinies of Little America without fear. For one thing, the winter night is ordinarily tranquil. No parties are in the field; the men are fully occupied in making preparations for the spring campaigns; and, secure from the blizzards and cold, life finds new and easy ruts underground. Moreover, I expected to keep in fairly close touch with them by radio. Hence, except for some special instructions to Poulter, I did not feel it necessary to draft a complicated set of regulations. My last general order to the camp, which was primarily intended to announce the line of command, covered less than three typewritten pages. It was a simple appeal to work industriously, conserve supplies, abide by the safety rules, and respect discipline. In conclusion, I said: "Every man in this camp has a right to be treated fairly and squarely, and the officers are requested to hold this fact in mind. In a sense our status is primitive ... We have no class distinctions as in civilization. What a man is back home does not count at Little America. He who may have failed back there has his chance to make good here; and he will not be judged by the position he holds so much as by the way he plays the game and does his job, however humble it may be .... "

This order I finished on the morning of March 22nd, just before I flew to Advance Base. I did not have time to post it. Somebody read it to the men after I left. Noville, who had shared his quarters with me, helped me pack a few personal things-several dozen books, a sextant, a couple of fine chronometers, a fine and rather elegant fur flying suit that a friend had given, a shaving kit, my own set of phonograph records, and various odds and ends. There was no ceremony about it whatever, if only because Byrd expeditions never stand on ceremony. The cook shouted cheerily, "Remember, Admiral, no class distinctions at Advance Base!" Bowlin and Bailey were fretting in the Pilgrim. Although hot oil had just been poured into the engine, it chilled rapidly; the temperature was 43 ° below zero and dropping. I remember glancing at my wrist watch as we left the ground. The time was 10:35 A.M. (18oth meridian time). Bowlin, as if sympathizing with my mood, made a banking tum around Little America before squaring away for the south. I took in every detail. If I had created anything tangible and unique in life, it was this sprawling. Smoke-spewing, half-buried city called Little America. pocketed within the eastern heights of the Bay of Whales. It heartened me just to look at the place. The job of reoccupation was nearly finished, and I need have no further worries on that score.