Skip to main content
Home   /   Blog   /   Lessons from Los Angeles: Make Transit Hip
There will be many accolades bestowed upon Los Angeles at this year’s American Planning Association conference. And no doubt many of them will be reserved for L.A.’s forward-thinking transportation policies; well deserved, since public transit generally lurks in the collective blind spot of Los Angelenos. But there is one strategy transit strategy that will likely get overlooked at the conference, and it is perhaps Los Angeles’ greatest feat. In L.A., where image is everything and the car is king, Metro is doing what might be considered Mission Impossible: make transit hip. This is the charge given to the capable and brilliant strategist Michael Lejeune, creative director for L.A. Metro’s Design Studio, a thirty-person team of talented graphic designers. Lejeune doesn’t shy away from this formidable challenge, but understands it takes an unusual creativity to erase the pervasive transit stigma in this town. Some marketing ideas recently employed by Metro include slipping herb-seed packets under the ticket window to frequent riders, and creating strikingly beautiful transit passes—a different one for each week of the year—with tips on how to live “greener.” Then there is the Matchbox® die-cast replica of Metro’s ubiquitous California poppy–colored buses. Toy car collectors now drool over these limited-edition public transit miniatures. Another campaign mates simple graphics with three-word haikus to create quick, memorable messages. 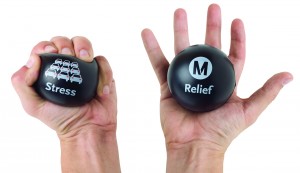 One of Lejeune’s most successful marketing campaigns, dubbed Opposites, presents Metro as an agreeable alternative to the automobile’s many disagreeable qualities. Using simple white graphics on a black background, various yin-yang messages were devised, targeting the tastes and values of those who have a choice in mobility. For example, the gasoline pump is portrayed as the villain and Metro the hero; auto exhaust as naughty and Metro as nice; and traffic as stress, while Metro offers relief. Metro’s simple, playful messages were applied to buses, billboards, and perhaps most effectively, to t-shirts. Opposites shirts became a sort of eco-fashion inLos Angeles, with the negatives of the car emblazoned across one’s chest, while Metro’s cheery positives were printed on the back. In an utterly ingenious ploy, these shirts were given to baristas inL.A.’s most fashionable neighborhoods. Suddenly, trendsetters found themselves in their favorite café being served lattes by people in black t-shirts touting the wonderful benefits of Metro. Since Metro’s rebranding in 2003, discretionary riders, those who can afford to choose between commuting by car or transit, jumped from 24 percent to 36 percent of overall passengers, more than double the national average. Unaided awareness of Metro and its services in L.A.Countynow stands at 71 percent. 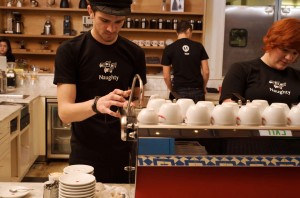 And the Opposites campaign was a key tool in heightening awareness of the agency during a crucial six-month period leading up to the November 2008 election, helping to convince the necessary two-thirds majority of voters to approve Measure R, a half-cent sales tax increase to help fund transit improvements for the next thirty years in L.A.[i] I bet you’re wondering, “How can a transit agency afford such a luxury, of hiring a team of designers to devise whimsical marketing campaigns?” It’s easy; Metro doesn’t view marketing as a luxury, but as a core investment…just like any business would. Transportation consultants agree with Metro’s strategy. Indeed, EMBARQ—the transit think tank for World Resources Institute—has some tough-love advice for the transit agency reluctant to spend precious dollars on marketing: “If an agency is nervous about marketing its service, then it should never have invested in the service to begin with.”[ii] Marketing is not an amenity, EMBARQ argues, but a basic need for business, even if your business is public transit. “Marketing is a core investment. A better public image attracts riders, leading to higher revenue and greater demand for transit service. In turn, higher revenue and greater demand increase the likelihood of service expansion and improvements, making public transport even more attractive to riders. In short, marketing can lead to a virtuous cycle of ever growing demand and service.”[iii] 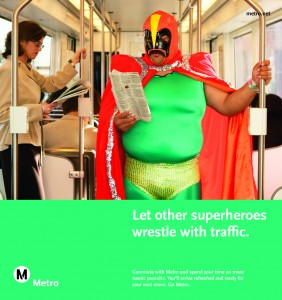 Metro understands the importance of delivering a positive image to potential passengers. Their fun marketing campaigns compels motorists, steering them away from their cars and toward more sustainable ways of getting aroundL.A.Without such campaigns, transit inLos Angeleswould still be deemed déclassé.
[i] Data provided by Michael Lejeune, creative director for Metro Design Studio, in an e-mail to author dated November 17, 2011. [ii] Erik Weber, Ethan Arpi and Aileen Carrigan, “From Here to There: a creative guide to making public transportation the way to go,” EMBARQ, 2011, 3. The guide can be downloaded here. [iii] Ibid.
transit
transportation