In Twenty Years of Life, award-winning health journalist Suzanne Bohan shows that it’s not a lack of medical care or poor lifestyle choices behind much of the ill health and shortened lives in impoverished communities, but a dearth of political power. She illustrates why the most effective solution for improving health actually hinges on preventing disease in the first place. To help create equitable places that support longer lives, poor communities can get politically organized to demand the same health-supporting resources and policies that wealthier areas take for granted, including well-maintained parks, safe streets, quality schools, and grocery stores.

Drawing from years of on-the-ground reporting, Bohan brings the impact of this new activism to life. With dozens of profiles of courageous and determined community residents and leaders tackling a wide array of topics, she details success stories with lessons for communities across the nation. As one public health expert wrote, "This book is filled with superheroes! Daring people who refused to watch their neighborhoods be plagued by avoidable and unjust inequities." Read our conversation with Bohan below, and share your questions in the comments.

Seven years into the 10-year campaign covered in the book, California has seen the passage of more than 500 new policies in 14 communities, and some statewide. How are the impacts of these policies measured? In other words, have these communities seen actual change?

The changes you’d ultimately want to see in these distressed communities include lower rates of diabetes, heart disease, obesity, cancer, hypertension, depression, and other common chronic diseases, along with increased life expectancies. However, as you can imagine, that takes time, as the youngest generation enters adolescence and transitions to adulthood. These diseases are hard to reverse, and prevention through better living conditions yields the most powerful results. The leaders of this California campaign don’t expect to see communitywide reductions in disease and early mortality for perhaps another decade, although possibly a few years earlier.

They liken it to the campaign to reduce lung cancer rates by reducing tobacco use, through laws limiting smoking in workplaces and public venues, taxation on tobacco products, public education campaigns and so on. No one expected an immediate decline in lung cancer rates, but in the years after these campaigns began, they did start dropping.

To keep an eye on changes in disease rates and longevity in these 14 communities, the campaign leaders are working with the University of California, Los Angeles, which conducts the “California Health interview Survey” (the largest state health survey in the nation), to include a few questions to monitor community-wide changes in the coming years. And there are already changes underway in these communities that are visible to many of those living there, creating a sense of positive momentum.

Is there a particular story in the book that stands out to you?

There are many, so it’s hard to choose. I met with many heroic individuals determined to challenge inequitable systems. This campaign actually bolstered my faith in the prospects of some degree of increased citizen engagement in the country—and every increase helps. I was also deeply impressed by the strength of the people living in these distressed communities, who persevere through challenges others in more comfortable neighborhoods scarcely, if ever, encounter.

That said, the story of Pogo Park, led by Toody Maher, is extraordinary. She was utterly committed to turning a small city park in a notoriously dangerous neighborhood—a park few used because of illegal drug activity, loose dogs that terrorized kids, and vandalism and litter— into an oasis of peace, beauty, and enjoyment. Against all odds she succeeded, and her revolutionary vision of harnessing the skills and commitment of residents living around the park to make it happen—because they’re deeply invested in its success, and compensated for their work—transformed that neighborhood. It’s truly a national model. 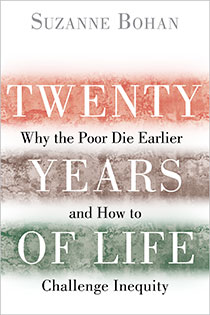 The last chapter in the book describes striking and consistent differences between how Democrats and Republicans relate to issues of health disparities. How can community groups use this information to effectively lobby their representatives—federal, state, or local—for meaningful policy change?

Very few are aware of this one-of-a-kind study I reported on regarding the different perspectives Democrats and Republicans hold on the reasons for wide gaps in health and longevity between US communities. To my knowledge these ideas have been tested in only limited ways in the policy arena, so one reason I covered this report is to better inform this dimension of the debate going forward.

As described in the chapter, however, one of the report authors advised those leading campaigns to reduce health disparities to use the same message with both conservative and progressive audiences, rather than two separate messages. He advised appealing to Americans’ fundamental sense of fairness, and how most people understand that “where you live, learn, work, and play” will have an influence on your health. He suggested using stories and “colloquial, kitchen-table” language, and to avoid stuffy academic terms like “social determinants of health” (which people especially disliked) or even “health disparities.” And to include a message of personal responsibility for health, but woven in with the notion that people should have the same opportunity to make healthy choices.

Furthermore, the message of citizens organizing to advocate for their own communities’ interests generally resonates across the political spectrum, as that’s the essence of democracy. It’s the same kind of collective action behind the revered American tradition of “barn raising.”

The communities you profile in the book have received millions of dollars in funding since the Building Healthy Communities campaign launched in 2010. What is the importance of this type of intensive, long-term investment?

It makes all the difference, as the outcomes of these investments typically last decades and benefit generations. In City Heights, a low-income San Diego neighborhood, teen advocacy under this campaign created two new skate parks in an area which previously had none, funded with a few million dollars in grants. Remarkably, in Fresno, community organizing under the campaign ushered in a $75 million community revitalization plan, which is expected to transform a distressed neighborhood with a high disease burden and uplift living conditions far into the future.

Sustained advocacy by community activists, parents, and students has funneled many millions of dollars into the state’s schools to fund practices to promote peaceful, productive school climates and parental engagement, along with accountability to ensure these practices are actually implemented. These critical changes help students learn and graduate, and ultimately head into successful careers and healthier lives. And these health-supporting policies are expected to become entrenched in school systems going forward, again benefiting future generations.

What lessons can other communities learn from the success stories in the book? Can residents expect to affect real change in their neighborhoods without substantial financial support? Why or why not?

They can, and there are examples such as the Dudley Street Neighborhood Initiative, which began more than three decades ago and has made extraordinary changes in its Massachusetts community. However “substantial financial support” is relative: according to the most recent annual report on its website, Dudley Street brought in nearly $4 million in 2015, so it was hardly insubstantial. But that compares to $1 billion over 10 years for the California campaign—an unprecedented commitment by a foundation to this type of work. So some funding is critical for a sustained endeavor, and one of the messages of this book for the world of philanthropy is that this model is showing major success in “funding change, not charity.” An outside funder brings numerous benefits as well, such as providing a “neutral convener” to aid numerous community groups in developing a unifying vision for action, and of course the resources to run a sustained campaign, with staffing, office space, and funds for supplies, media campaigns, research, etc.

However, there are innumerable examples of campaigns with no budget—typically shorter-term but not always—that have led to lasting change. So if citizens recognize a pressing issue facing their community, they can take some of the examples in this book (or one specifically on community organizing) on how to run a campaign—which includes thorough, accurate research, reaching out to those in a bona fide position to influence, holding tightly-run public meetings to build credibility and support, etc.—to create change with few or no expenditures. And people commonly describe attaining a new sense of power and optimism by participating in these efforts, along with better community or school conditions and a greater sense of connection to neighbors.

Did you find anything in the course of researching and writing this book that surprised you?

Many things, actually. One strategy that struck me as surprisingly powerful and yet simple is the advice to keep community organizing events to a precise time frame—such as one hour and to start and end precisely on time. That’s especially true for “actions,” in which a demand is made of those in power. Most people expect community volunteers to run things a little more casually, and are surprised to see that kind of discipline on display. It respects the time of those attending, and people are more likely to stay involved if they’re confident meetings will end at a predictable time. That strategy is especially powerful in youth groups. While of course the quality of content matters enormously, those small but critical steps leave a lasting impression, and those in positions of power are often taken aback by this control of the meeting. As community organizers often say, “Power respects power.”

And building power is in fact what these endeavors must achieve, as that’s ultimately what causes those in positions of influence to shift their position—be it releasing resources, enacting a new policy or law, etc.

What do you hope readers take away from Twenty Years of Life?

That within these distressed communities around the nation—the ones often labeled as “bad neighborhoods”—there’s a deep reservoir of talent, goodness and latent power. That’s commonly overlooked, and those living in these neighborhoods often bear the extra burden of unwarranted, offensive stereotypes.

And that rather than concentrating on charitable programs to help these communities, a smart investment is in building up their political power, so residents can advance their visions for a healthier community and drive sustainable change by cultivating long-term local empowerment. And that in fact the entire nation benefits, as when these horrific disparities between communities in something as fundamental lifespan and disease burdens begin to shrink, it’s likely to lead to a more peaceful, less stressful society for all.