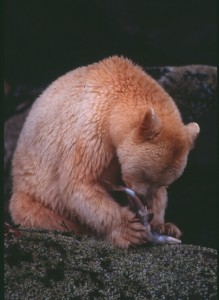 The Great Bear and adjacent archipelago of Haida Gwaii are critically important rainforests (read more in Temperate and Boreal Rainforests of the World) because they represent over a quarter of the Pacific Coastal rainforest region, a vast area that stretches from Alaska’s Prince William Sound to the California coastal redwoods. Like its northerly neighbor, the Tongass, the Great Bear Rainforest and Haida Gwaii are among the last places on earth where it is still possible to experience untrammeled temperate rainforests. These verdant forests are home to coastal giants like Sitka spruce, a white phase of the black bear (Kermode or “Spirit Bear”), a unique subspecies of goshawk, abundant grizzly bears and wolves, and prodigious salmon runs. On March 31, 2009, the Great Bear Rainforest agreements were reached (and endorsed by the government of British Columbia) with conservation groups, logging companies, and First Nations to protect half of the intact rainforests from all industrial development while allowing some forms of logging under the yet to be developed principles of ecosystem-based management. And while the agreement falls short of the 70 percent protection targets recommended by scientists, it brought all the major parties together toward agreeing on these science-based goals. That is except for the TimberWest logging company. The company’s history of opposing forest protections got them fewer restrictions on logging during the transition to full implementation of the agreements. Recently they boosted logging levels in the southern portion of the region before more restrictive rules come into place. This rush-to-log has put the company at the forefront of controversy. Forest Ethics, Greenpeace, and Sierra Club, BC got a birds-eye view of the companies’ logging practices by flying over the southern region on June 11 where TimberWest was chipping away at coastal rainforests. If this were a hockey game, the company would be sent to the penalty box for un-sportsman conduct. TimberWest can still get out of the penalty box as it just changed ownership and conservation groups are asking the owners to turn over a new leaf (http://forestethics.org/timberwest-logging-threatens-great-bear-rainforest-solution) by supporting full implementation of the agreements now. 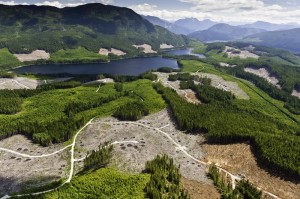 The agreements offer a unique opportunity to halt large-scale logging and manage the region responsibly. Corporations have more than a bottom-line responsibility to shareholders. They also need to be good neighbors and stewards of the same life-support services that provide local communities with clean water, coastal fisheries, a stable climate, and subsistence wildlife. TimberWest is being asked to act as a responsible citizen of the rainforest community by doing its part to abide by the agreements while there is still time to save some of the last intact old-growth temperate rainforests on earth. Dominick A. DellaSala is chief scientist and president of the Geos Institute in Ashland, Oregon, and president of the North American section of the Society for Conservation Biology.  He is the author of Temperate and Boreal Rainforests of the World: Ecology and Conservation.
biodiversity
climate change
forests
rainforests
wildlife