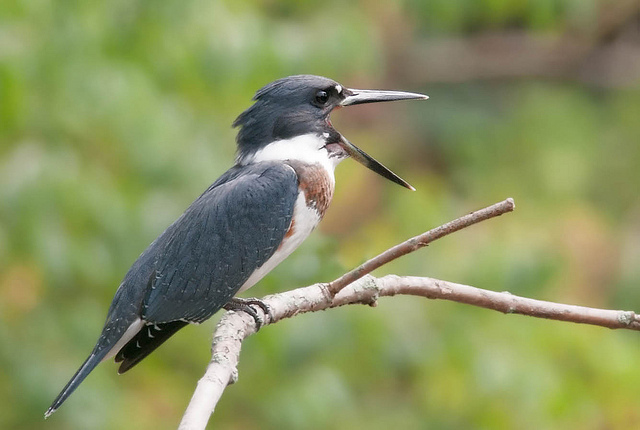 A Belted Kingfisher. Photo by Kelly Colgan Azar, used under Creative Commons licensing.
Originally published by Village News, a publication of the community of Cabin John, MD. What is the loudest bird on Earth? An irritated male Belted Kingfisher is one good candidate, especially if you are next to a perched member of the species uttering his piercing scream-rattle along the banks of the Potomac. There’s a good evolutionary explanation for being such a loudmouth: announcing to your competitors that this is your turf, your breeding territory—Other Kingfishers Keep Out. Kingfishers need to eat a lot of prey each day from a smorgasbord of fish, frogs, and crayfish to meet their daily energy requirements. Controlling a suitable stretch of river or the canal from competing birds is thus important in the ultimate goal of producing healthy offspring that carry on the genes of the parents. Belted Kingfishers have a presence about them. There’s the powder blue-grey plumage, fierce beak, and a head crest that gives it the look of a permanent bad hair day (the female also sports a showy orange belt of feathers). Most impressive is its robust build, reminding me of a once-skinny but pugnacious hummingbird that spent a lot of time at the gym. In our region we have only one species of kingfisher; two others appear along the Mexican border and are the only two others found in the US. Further to the south in the Americas, in the tropics, the number of species isn’t much greater than it is up north. For some reason, the Amazon rainforest, exuberantly rich in so many taxa, missed the boat when it comes to diversity of kingfishers. There are but a handful, and they all look alike, being slightly larger or smaller versions of each other. The reason for the lack of greater speciation among New World rainforest kingfishers remains a puzzle to biologists. It’s when you travel to Africa and to an even greater extent, to the islands that comprise Australasia, that the kingfishers explode in all their diversity, glory, and plumage. Of the 87 species of Kingfishers, New Guinea boasts the most, but many islands of that region—Sulawesi, Mindanao, Bougainville, Guadalcanal, Vanuatu, Tahiti—have their very own species found nowhere else. Unlike our Belted version, most kingfishers don’t feed over water but inland: they are truly forest or savanna birds, hunting insects and other invertebrates. And many are not as boisterous as our local bird, offering softer calls, or in the case of the ubiquitous Common Kingfisher, hardly any song at all. If we adjust for body size maybe the loudest bird of all is an Australian native, the Laughing Kookaburra, an even more robust member of the Kingfisher family, or a bird of the Amazon rainforest known as the Screaming Piha. If you have ever watched a Tarzan film, or any motion picture set in a tropical rainforest, chances are the soundtrack is not local but replaced by the evocative vocals of the Screaming Piha or the hysterics of the Laughing Kookaburra. Their songs personify wildness. When I listened to the Laughing Kookaburra in a forest near Sydney, it struck me as the perfect greeter to the gates of Hell. Our local Kingfisher seems to have no interest in auditioning for such a role, though, while prospering in its territory along the locks of the Potomac, looking for its next easy meal.
biodiversity
birds
conservation
wildlife