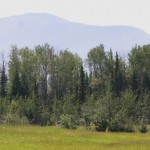 Spring comes to the northern Rocky Mountains like a lion and often leaves like one too. This spring proved no different. I spent it in Waterton, Alberta, resampling eighty miles of track transects I had created three years earlier, looking for changes in wolf and elk use of this critical wildlife corridor. My study area in Waterton-Glacier International Peace Park spans the US-Canada border and harbors most wildlife species present at the time of the Lewis and Clark Expedition. Track transect surveys are among my favorite fieldwork, because this method allows me to experience landscapes intimately. Walking along the same pathways that wolves and elk use, I pull measuring tape in fifty-yard increments and record all the large mammal animal sign I find along a two-yard strip on either side of the tape. Along the way I often find unexpected and fascinating things and secret places—coyote dens, wolf rendezvous sites, a newborn elk bedded in the shrubs, and the place where a grizzly sow has lain with her cubs. However, this method can only be applied between snowmelt and when the grass grows tall enough to hide the data (wolf and elk droppings, carcass pieces). This May, five snowstorms made our work more challenging than usual, effectively burying my data and immuring us in our quarters for days. The research house phone rang during a particularly severe snowstorm. A stranger named Marilyn was on the line. She’d read my book, The Wolf’s Tooth: Keystone Predators, Trophic Cascades, and Biodiversity, and had tracked me down to this remote outpost. A second grade teacher from South Carolina passionate about wolves, she said my book had changed how she looks at the natural world. “Will you take me in the field with you?” she asked softly. “Can you show me a trophic cascade?” How could I resist? Two months later I had the pleasure of meeting Marilyn and her sister Gail, a university administrator, and taking them into Glacier National Park’s secluded North Fork Valley, where a high wolf population is leaving the bold ecological signature characteristic of trophic cascades. So what are trophic cascades? They are cascading food web relationships in which a top predator, such as a wolf, influences its primary prey, such as an elk, by killing or scaring it and making it more wary. Termed “the ecology of fear,” these dynamics cause profound effects in elk behavior, forcing them to nibble plants warily and look up frequently, rather than standing around complacently browsing aspen and shrubs to death. I led Marilyn and Gail on a well-marked game trail into an aspen-hemmed moist meadow that is indiscernible from the park road. Humans seldom visit this meadow; consequently, wolves spend considerable time here. The wolves were not home that day, but their trophic markers were abundantly evident. The sisters were full of questions, their naturalist eyes keenly aware of details. No matter where we looked, we saw many old and young aspens, but no middle-aged ones. The gap in the trees’ ages corresponded with the period between 1915 and 1985 when humans had eliminated wolves from this landscape. Until the wolves’ return, few aspens had been able to grow above the elk’s hungry reach. Willow thickets in the center of the meadow offered further evidence of the ecology of fear. These formerly knee-high shrubs had grown tall again since the wolves had returned, providing rich habitat for beavers and songbirds, such as American redstarts. We wandered the meadow, bushwhacking through luxuriant streambank vegetation—serviceberry, chokecherry, and willow intertangled in a prodigious mess— and crossed a narrow stream. I described what this place had been like before the wolves’ return—the barren streambanks, the senescent aspen stands. I related what it had been like to live in a small cabin in the forest south of the park and witness wolves recolonizing my home in the 1990s. These inveterate travelers drifted down from Canada into some of northwestern Montana’s most mysterious wild country: the North Fork, Ninemile, Swan, and Yaak valleys. Prolific breeders, they soon filled these legendary valleys with their progeny and howls. And miraculous changes—more vigilant elk, flourishing willows and aspens—quickly began to occur, literally in our backyard. My young daughters’ infectious curiosity about these changes had inspired me to study trophic cascades for my dissertation research. These relationships and their unexpected and astonishing consequences are part of nature’s interconnected web and provide evidence of evolution. My study represents only a small part of society’s growing store of research and knowledge about these effects. As the heat of the afternoon rose, Marilyn, Gail, and I sat in the wildflowers in the shade of the aspen forest and talked about how wolves indirectly touch everything in an ecosystem. Mourning cloak butterflies, their black wings bordered by bright blue spots and edged with cream, flitted among the lupines and asters. This meadow felt infused with the ineluctable play of energies at the heart of trophic cascades. Gail picked up part of an elk femur thicker than her forearm and gingerly examined it. I showed her the mark of the wolf’s tooth on the bone’s jagged edge—and in the meadow—how only a wolf had teeth strong enough to crack this bone and suck out the marrow. This carcass piece provided a graphic example of how the elk’s blood spilling out into the meadow created a haven for beavers and butterflies. 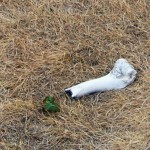 The sisters’ visit reinforced something I’ve long known. Coexisting with wolves has more to do with humans and our views than with wolves. Eyes shining, these women described their vision for educating young children about how wolves can renew aspen communities and streams and wild nature. Spending a day afield with them and experiencing their sense of wonder about trophic cascades science filled me with hope. After a seven-decade absence, wolves have returned home and are prospering. But wolf conservation and ecological restoration depend only partly on science—the rest has to do with our human hearts. ——— Cristina Eisenberg is a conservation biologist at Oregon State University, College of Forestry, and Boone and Crockett Fellow who studies how wolves affect forest ecosystems throughout the West. Her new book is The Wolf's Tooth: Keystone Predators, Trophic Cascades, and Biodiversity
biodiversity
trophic cascades
wolves