Editor's note: One of the perks of working at Island Press is being able to talk with the scientists, planners, and other people tackling environmental problems. So today we're beginning a new series to introduce you to some of the authors behind our books by sharing Q & As we've conducted over the past several years. We hope you enjoy! If there's anyone you'd particularly like to hear from, leave a comment and we'll see what we can do. 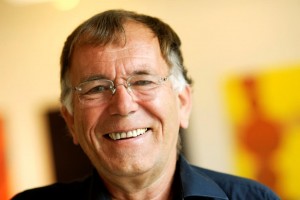 In this installment, we hear from Jan Gehl, author of Cities for People and co-author of How to Study Public Life.

Q. You've been researching, teaching, and helping to design cities for people around the world for more than 40 years. What keeps you doing it? What are some of your favorite projects?

A. Urban design is a fabulous profession because it enables you to very directly improve the quality of life for people in all walks of life and in all parts of the world. Seeing places, settlements and cities developing into substantially better places for people to live and work is a reward in itself, which wants you to do still more. My favorite projects are multiple and include the many enthusiastic students I have trained and the books I have written, some of which are now available in 20 languages and thus can be of use to create better cities for people in all parts of the world. Among the physical projects I have worked on I am especially happy about Copenhagen, Amman, Melbourne, and New York. They are very different places, but in all cases they are now caring much more for people.

Q. What is the most common mistake city planners, policymakers, and urban designers make in planning or redesigning their cities?

A. In a world where, generally speaking, planners look after the plans, architects look after the buildings, landscape architects attend to the landscapes, and traffic planners provide for the traffic, it has increasingly become a problem that no one is specifically asked to look after the people, and the education of all above professions does not include much specific concern for this area. Planning for people in the cities is an overlooked dimension—resulting in lamentable projects.

Q. What is the most important tool (or tools) available to help designers, planners, and policymakers to design cities for people?

A. Ever since the 1960s  when—in a big way—planning and construction of new areas became industrialized and of huge dimensions (big areas, large districts and buildings) it has been a very unfortunate habit to organize the planning process from top down: first buildings, then spaces, then perhaps some life. This process needs to be reversed: first life, then spaces, then buildings. In this way you start with the people and end with the building blocks. This actually had been the order in which cities were developed throughout history—until the past 50 years.

Q. How do your ideas for creating livable, inviting public spaces in cities help to make them more environmentally sustainable?

A. Basically I am advocating that city planning must invite people to walk and bicycle as much as possible in the cause of their daily doings. This simple formula leads directly to the cities being more lively, safe, sustainable, and healthy. Obviously policies that invite the use of more muscle power will lead to less pollution and less consumption of energy resources. Further a good public realm and good public transport systems are closely related. In the future when we will have to rely much more on public transportation in the cities, the quality for walking and bicycling to and from the public transport will be very important for the overall quality of the transportation systems. 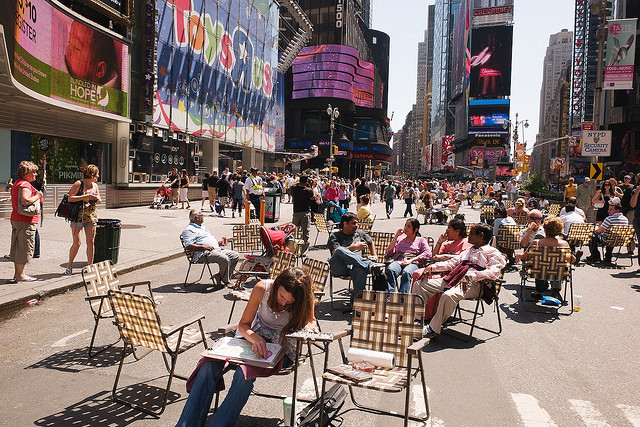 Closing Times Square to traffic to create more space for people is one of the innovations Jan Gehl has spearheaded. Photo by Mat McDermott, used under Creative Commons licensing.

Q. Your ideas on public spaces have been integrated successfully in New York including the closing of Times Square to automobiles, taking back part of Broadway, adding protected bike lanes, and initiating Summer Streets. What are some other cities that have adapted these ideas?

A. Generally a number of European cities—such as Copenhagen, Lyon, Barcelona, and many German cities have pioneered the reintroduction of people-oriented city planning. Not much seems to have happened in the United States in this area for many years. However, the vigor and speed with which the City of New York has in recent years started up this kind of work towards a greener and more people-friendly city has impressed cities all over the world. And it has certainly inspired many cities in United States who are now in various stages of starting up in earnest. 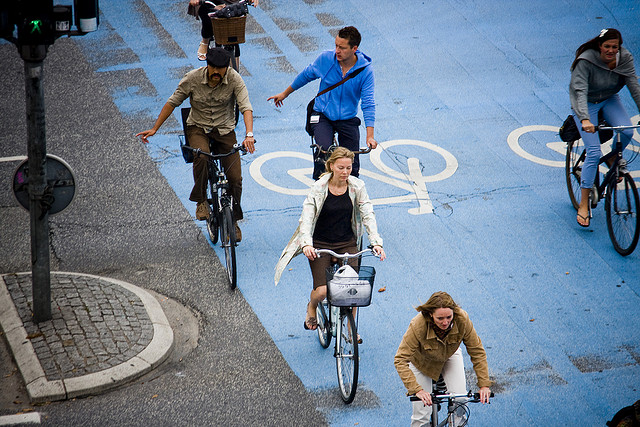 Q. One of the cities you're well known for helping design is Copenhagen. Why do your ideas work so well in this city and what lessons can be adapted to other cities, particularly in the US?

A. Copenhagen started up this kind of planning in 1962. (This was almost at the same time when Jane Jacobs successfully fought to prevent the Lower Manhattan Expressway and to save Greenwich Village from being torn down. Her book The Death and Life of Great American Cities was published in 1961.) Starting people-oriented planning in 1962 means that Copenhagen has now been at it for 52 years. Step-by-step improvements have been made throughout this period. Every day the city becomes a little bit better than yesterday. Surveys on how people use the city have been carried out through 40 years (by the School of Architecture), and this documentation has helped the politicians greatly in gaining confidence for changing the city. Basically it has been documented year by year how the new pedestrian areas and streets led to more people using the city and more customers passing the shops. In short Copenhagen has over the course of many years  developed a culture of “people- oriented planning”, meaning that everyone from the Lord Mayor and down has become convinced that “this is the way to do things”. Copenhagen has become world famous in the process.

A. In the developed parts of the world, cities can be made substantially more livable through people-oriented city planning. This is a quality in its own right in these cities. In the fast growing cities in the developing countries, we can see that conditions for the great majority of the citizens who have no access to motor transport is rapidly deteriorating. This has many sinister implications for the quality of life especially for these citizens but actually for everyone in these cities. A city where interesting work has been carried out to address these issues is Bogotá in Colombia, S.A. In order to make the 80% of the population who have no access to cars more mobile, sidewalks were improved, many new bicycle lanes were laid out, and a new Bus Rapid Transport system was introduced—all to improve quality of life for the majority and enable people to move around in the city (and reduce the traveling time for the less privileged). Also some 900 parks and street improvement schemes were carried out over a short span of years (1998-2000 under the direction of Mayor Enrique Peñalosa) as part of the general policy to improve the quality of life for the many families in small, overcrowded homes, through better quality of public spaces.