Skip to main content
Home   /   Blog   /   Nature's Economy and Climate Change
On June 25, 2013, President Obama gave what may be his most important speech thus far. In it, he acknowledged the impacts of climate change on our society. These impacts include heightened atmospheric carbon pollution due to fossil fuel consumption, melting Arctic and Antarctic ice, temperature and sea level rise, and increased severe climatic events. Our president expounded on the high economic costs of climate change and our need to work as a nation and global power to be part of the solution. He finished by outlining his Climate Action Plan, which aims to reduce atmospheric carbon via multiple strategies. From a scientific perspective, President Obama’s speech provides too little too late. Since the late 1980s, hundreds of peer-reviewed scientific journal articles have provided incontrovertible evidence about worldwide climate change effects. Given this widespread and deep scientific knowledge, our nation should have developed a Climate Action Plan years ago. Instead many of our leaders have spent the past two decades in denial. President Obama’s speech is an indication that climate change is becoming increasingly difficult to ignore. In 2012, Hurricane Sandy, related to climate change, caused widespread destruction in the northeastern US. The polar regions are furnishing equally graphic evidence of climate change. Vanishing ice is eliminating critical habitat for a host of ice-dependent species, including Adélie penguins (Pygoscelis Adélie) and polar bears (Ursus maritimus). These species may be doomed to extinction within the current century. 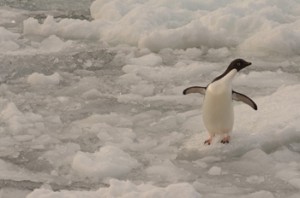 Adelie Penguin in the Rain on the Larsen Ice Shelf, Antarctica. Photo credit Cristina Eisenberg
A new paradigm is needed to slow climate change. President Obama’s Climate Action Plan falls short of providing that new paradigm. Commendably, the new plan will increase production of wind and solar energy and set tight EPA pollution limits for power plants. However, it is based on an ongoing vision of limitless economic growth via intensive energy development, primarily natural gas. In his seminal book, Nature’s Economy, ecological historian Donald Worster suggested that the natural world functions like an economic system. Economists and ecologists have long known that in any system, growth can’t be sustained indefinitely.[i] Further, President Obama terms natural gas “clean” energy. In doing so he disregards science that shows that natural gas extraction by hydraulic fracturing (called fracking) is ecologically unsound, due to the toxic chemicals used. In Wyoming, Pennsylvania, and other places, natural gas extraction has devastated entire watersheds, rendering the water undrinkable. Communication is the key to creating social change. As a scientist I take heart in the fact that President Obama’s Climate Action Plan has opened the door to more widespread discourse on ethics, economics, and science.
climate
climate change
ecological economics
Obama
wildlife