Skip to main content
Home   /   Blog   /   Occupy the Tongass Rainforest?
Taking America by storm with actions reminiscent of the 60s, “Occupy Wall Street” has gone viral in an attempt to raise awareness about corporate interests being placed above public needs. But the movement has yet to sound alarm bells on the Tongass rainforest, where a native corporation is seeking to develop and log over 100-square miles of public lands through a legislative lands transfer proposed in Congress. With 290,000 acres of corporate holdings and 560,000 acres of subsurface rights, the for-profit Sealaska Corporation is the largest private landholder in Southeast Alaska and largest of 13 regional native corporations established under the Alaska Native Claims Settlement Act (ANCSA). Decades of Sealaska clearcuts run scatter shot across the region, holes punched in a verdant rainforest web-of-life. Here’s what’s at stake if the proposed land transfer takes hold. 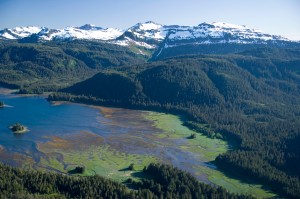 The Tongass is the  “crown-jewel” of the national forest system. It contains one-quarter of coastal temperate rainforests that once stretched nearly unbroken from Alaska’s Prince William Sound to California’s magnificent coastal redwoods. Throughout the world, forests are vanishing at an alarming rate of 60 acres every minute of every day, but the Tongass stands tall as one of the largest remaining tracts of relatively undeveloped rainforests in the world (see Temperate and Boreal Rainforests of the World: Ecology and Conservation). A visit to the region makes you appreciate just how special the Tongass is as it remains a timeless wonder where traffic-jams are replaced by “salmon-jams,” fish lined up head to tail, fin-to-fin, to spawn and die while hungry bears, wolves, and eagles wait patiently on river banks for their catch-of-the day. Its highly productive coastal areas, fisheries, and forested lands are irreplaceable public treasures - a key reason why President Theodore Roosevelt established the Tongass as the nation’s premiere national forest in 1907. The Tongass is also part of a global network of rainforests that purify drinking water supplies, cleanse the air we breathe, and lessen climate change impacts. Southeast Alaska, in general, contains over 2,500 wild salmon runs, the densest salmon-jam on the planet. Tongass roadless areas and old-growth rainforests are strongholds for the region’s salmon fishery. And the Tongass rainforest is a vital part of the planet’s air purification system, soaking up immense amounts of carbon dioxide from the atmosphere and storing it in long-lived trees, soils, and dense foliage. When rainforests are cut down, much of this stored carbon is released as a greenhouse gas pollutant from decaying logging slash left on the ground and the manufacture and transportation of wood products over long distances. Around the world, logging of forests contributes more global warming pollution annually than the total emissions from fossil-fuel powered vehicles in the same time period. The so-called Lands Transfer bills (S.730/H.R. 1408) sponsored by Alaska Congressman Don Young and Senator Lisa Murkowski would allow Sealaska Corporation to select over 65,000 acres of some of the most important conservation and culturally valued lands within the Tongass to log and develop.  Rainforest champions like spruce and cedar—that grow as tall as twenty-story buildings—would be cherry picked from the Tongass and then sent overseas to timber starved China and Japan. According to a recent analysis by Audubon Alaska, only two percent of the largest trees remain on the Tongass. Many of the public lands parcels that Sealaska Corporation wants to develop also are from public lands sited at the heads of bays, mouths of salmon streams, and large-tree rainforest areas. These lands contribute an inestimable value to commercial and sport fishing, recreation, subsistence fishing and hunting and tourism. Developing them would harm these industries that are considered the backbone of the regional economy. No new legislation is needed to finalize Sealaska Corporation’s land entitlement claims as the corporation already filed remaining claims under ANCSA but has delayed these land selections so it can pursue controversial legislation. ANCSA established areas available to native corporations for economic opportunities while designating additional lands for the Tongass National Forest. Occupy Wall Street has placed single corporate interests in a national spotlight. Sealaska Corporation’s preoccupation with the lands transfer bills is indicative of corporate interests being placed above those of the public. For more information on this bill click on: http://seacc.org/issues/land_transfers/sealaska Dominick A. DellaSala is chief scientist and president of the Geos Institute in Ashland, Oregon, and president of the North American section of the Society for Conservation Biology. He is the author of Temperate and Boreal Rainforests of the World: Ecology and Conservation.
biodiversity
emissions
climate change
forests
global warming
rainforests