Skip to main content
Home   /   Blog   /   Paddleboard Urbanism
Reposted from the Biophilic Cities blog with permission. Years ago I attended the Congress of the New Urbanism annual conference in Chicago, where I met Katie Selby (now Katie Selby Urban). She and her brother Jed had just embarked on an ambitious plan to develop a new neighborhood in their home city of Buena Vista, Colorado. That development, called South Main, designed around the principles of New Urbanism, is now a reality.  As Katie and Jed (and Katie’s husband Dustin) are all competitive freestyle kayakers, it is not surprising that a key and distinctive feature of South Main is its connection to the Arkansas River. South Main includes a whitewater park complete with a series of surf waves, extensive hiking trails, and even a climbing boulder. 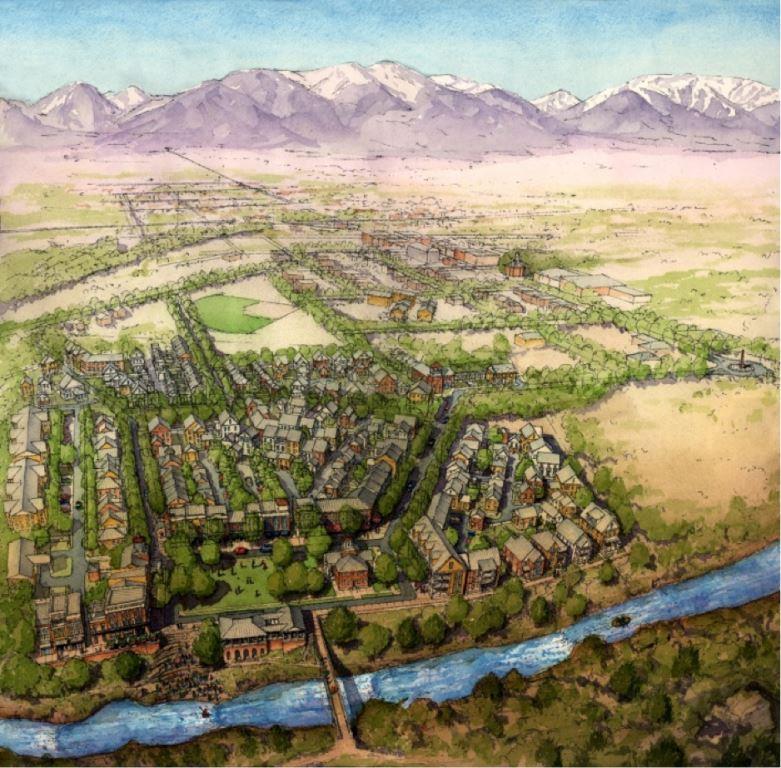 South Main, Buena Vista, CO. Source: Southmainco.com
In a recent phone conversation, Katie explained how central and important the whitewater park is to the neighborhood and increasingly the entire community. The Selbys’ vision is a biophilic one to be sure—the desire to create a vibrant place to live and work, with direct and immediate connections to nature. This nature is not far away, but as in South Main, is nearby nature. The whitewater park at South Main has been a great success, Katie tells me, “a draw on many levels,” and an amenity residents and visitors enjoy and are proud of. “People are blown away by what’s right outside their doors…You could literally on any given day do any combination of hiking, mountain biking, bouldering, kayaking, stand-up paddleboarding, tubing.”  South Main and Buena Vista are not the only communities that have discovered this idea. Katie tells me about major whitewater parks in a number of other cities, including Reno, Nevada and Charlotte, North Carolina, and new ones under development in places like Bend, Oregon.  Many of the places of local nature we are drawn to involve water:  rivers, harbors and estuaries. We want to canoe, kayak and boat, fish and swim, and bask in the reflected light of these beautiful watery realms. There are often great possibilities to better plan and integrate them into new development. 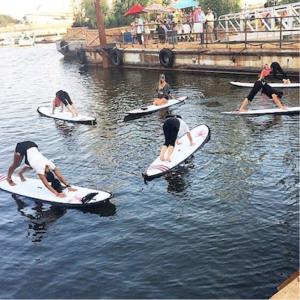 SUP Yoga classes on the Schuykill, Philadelphia. Source: Phillymag.com
I first started to imagine a kind of “kayak urbanism,” a renewed emphasis in many cities, from New York City to Richmond, Virginia, on providing direct connections to water and the opportunities in these places to dip one’s fingers, toes or paddle into water, ideally within a few minutes’ walk of where you live or work. In chatting with Katie, though, I’ve learned about the explosion in other modes and forms of water- or river-based recreation, in particular the growing popularity of Stand Up Paddling (SUP) or Paddleboarding, so perhaps paddleboard urbanism is a more timely moniker. The growth of SUP does seem quite impressive, with more than 1.5 million engaged in stand up paddling, a sport that really didn’t exist before the early 2000s (and according to the Outdoor Industry Association, saw a remarkable increase in participation of 47% between 2011 and 2013 alone). 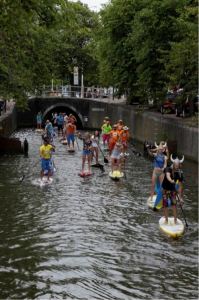 The 11-city SUP Tour in the Netherlands. Source: sup11citytour.com
And it does seem that cities are exploding with new SUP adherents, and even some (no longer) unusual combinations of activities, such as SUP yoga classes, something that has taken place on the Schuylkill, for instance, at Philadelphia’s pop-up Spruce Street Harbor Park (by a group called Aqua Vida). In the Netherlands, a country known for its canal-skating heritage and culture, there is now even an 11-city SUP Tour, building on the tradition of winter city-to-city skating tours, complete with stamps at each stop (the shift to a SUP event may be a very smart move in a climate where the canals haven’t fully frozen for some fifteen years). Started by Dutch champion windsurfer Anne-Marie Valeria Reichman, this coming September will see the seventh year of the tour (and race). There are clinics each day for learning SUP, and live-streaming and live-tracking of the tour. 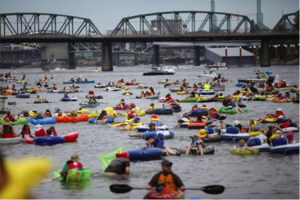 Thousands enjoying Portland’s Big Float in July. Source: Oregonlive.com
Many cities have developed unique water events and special relationships and ways of enjoying the water around them. Portland Oregon’s Big Float, each July, boasts several thousand residents in inner tubes and other “flotation devices.” Water traditions in other cities, punting in the Ancient city of Cambridge, UK, for example, are much older, of course! The popularity of Portland’s Big Float—an event only five years old—suggests it is never too late to start such traditions and they can quickly grow to enhance quality of life, sense of place, and to build new connections to water and nature in urban settings. 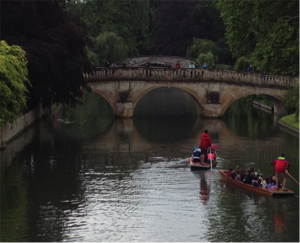 Punting in Cambridge, UK. Source: Tim Beatley
It is also encouraging how many global cities are working towards the ability of their residents to swim in the rivers and water bodies. The City of Copenhagen, for instance, has famously opened several public swimming areas within the inner harbor, made possible by the shift away from more industrial port industries, and admirable efforts to significantly clean the water of the harbor. Inspired by Copenhagen, and building on its own swimming history, an effort in London has been underway to explore possibilities of swimming in Thames River, and even a recent proposal for floating lido (see the design below by the firm Studio Octopi).  Other cities from New York to Berlin are following suit, understanding the value and benefit of outdoor swimming. 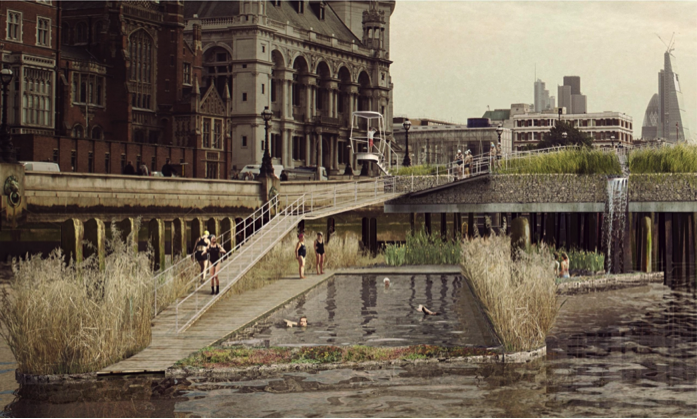 Proposed floating lido on the Thames River, London. Source: Studio Octopi
The water is not always clean, of course, and in the US we have made poor progress in many places achieving the “fishable and swimmable” goal ensconced in the U.S. Clean Water Act. But progress is being made in many places and the renewed attention to enhancing access and contact with water in cities is encouraging. We indeed need places to swim, to glide, and to paddle, and luckily so many such opportunities exist near cities, where most of us live. We will need to continue to modify our designs and planning in the future to ensure that these opportunities continue to expand, and that they help catalyze further progress in improving water quality and in appreciating the abundant biodiversity that exists in these aquatic realms.  The positive trends in “SUP’ing,” suggest the emergence of a new generation of paddleboard urbanists, who will lead the charge and help us paddle and kick and float our way towards a new vision of urban life!
cities
Copenhagen
planning
rivers
urbanism