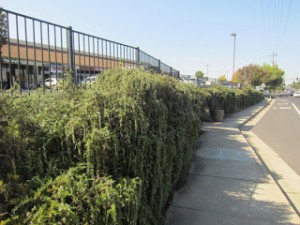 A wall of cascading rosemary
outside a popular supermarket.
Inside the supermarket, rosemary is $42/lb.
Outside, it's free for the picking
Editor's note: On his food blog Today is...Fava Beans!, author Darrin Nordahl shares one adventurous new food a day. The recent post we've shared below ties into his book, Public Produce, newly available as a fully revised second edition. $42 per pound. That is what you will often pay for fresh rosemary in the supermarket. And that's if you're lucky (I've seen it as high as $96 per pound). Most have no idea they are paying that much for an herb ubiquitously planted in landscaped borders and perennial beds throughout the west and southwest. 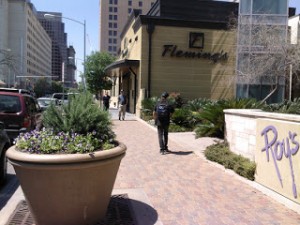 A restaurant grows rosemary in large,
decorative containers along a sidewalk
in Austin, Texas
My local supermarket charges $1.99 for a 3/4 ounce packet of rosemary sprigs (a local "upscale" market charges $1.99 for 1/3 ounce packet). Of course, we don't buy rosemary by the pound. But when you do the math, the unit price per pound is staggering, enough to make you want to forage it for free in your urban surrounds. Or grow it yourself. I do both. Rosemary is extremely versatile. It is bold enough to stand up to the big flavors of beef and lamb, yet nuanced for luxurious pairings with pork and chicken. Not just for proteins, rosemary's affinity with carbs and fats is quite well-known. It single-handedly elevates simple roasted potatoes into the sublime. Rosemary bread, rosemary focaccia, rosemary butter, and rosemary-infused oil are common culinary delights. 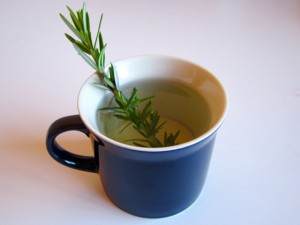 Rosemary tea:
Simple, quick, and comforting
Not as well-known is rosemary tea. Simply steep a sprig of rosemary in boiling water for five minutes and stir. Calm in a cup. Here's a fun use for rosemary stems. If you can find a very stiff-stemmed variety like 'Tuscan Blue,' which has a vigorous, upright form, cut a few longer, stout branches from the shrub. Strip the leaves and let the stems dry so that they become hard. These dried stems can now be used as kebab skewers. The oils in the wood impart a light rosemary flavor to the food, while also giving off a heady, almost mustard-like aroma from the high-heat of the grill.
food
agriculture