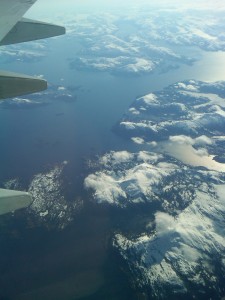 En route from Seattle to Anchorage on May 4, 2011 to give a talk on the importance of the United Nations International Year of Forests, I could not help noticing the stunning view from my window seat at 36,000 feet. I could see massive glaciers straddling the tallest peaks of the Coastal Range, and, at lower elevations, verdant rainforests of Vancouver Island (south BC coast), Great Bear Rainforest (mid BC coast), and Tongass (southeast Alaska). Unfortunately that also meant that I had a clearcut view, literally, of how humanity’s ecological “Bigfoot” is rapidly stomping out some of the most important temperate rainforests on the planet. Replacing structurally complex rainforests were expansive areas of clearcuts distributed in a shotgun blast of snow-covered openings easy to pick out from remaining green rainforests. Gazing at the landscape below, I mentally went over the forest facts. Just how important are forests in a global sense? Well, based on the latest global assessments published by the Food and Agriculture Organization (FAO 2010) and other research (summarized in Temperate and Boreal Rainforests of the World: Ecology and Conservation), forests cover 31 percent of the earth’s surface, sustain about 80 percent of its biodiversity, and absorb the equivalent of over 35 times our annual carbon dioxide pollution. Forests cleanse the air we breathe, purify our drinking water, provide us with medicines, many yet to be discovered, and are linked to our food supply, particularly salmon in the case of the Pacific Coastal rainforests. And while deforestation rates have slowed globally, 13 million hectares (32 million acres) each year have been logged in the past decade, roughly 25 hectares (~61 acres) every minute of every day for the past 10 years. An important subset of these statistics is the decline of primary (previously unlogged) forests. These forests represent 36 percent of the total forest cover. Most occur in South America, followed by North and Central America, and they have declined by about 40 million hectares (100 million acres) over the same time period. Over 60 percent of the world’s largest forested blocks (large enough to sustain all native species including wide ranging ones and natural ecosystem processes) are also gone and the remaining areas are vanishing quickly. For instance, Europe has no large intact areas and the contiguous United States has very few intact areas due to road building and logging. Road building on the U.S. National Forest System alone has resulted in over 400,000 miles of forest roads, enough to circumnavigate the globe 17 times. Taking another glance from my window seat, I pondered what all this might mean for the Pacific Coastal rainforests, which, aside from the occasional windstorm and rare fire events (more so southward), once ranged nearly unbroken from the California redwoods to Tongass rainforest. Today, only 4 percent of the redwoods are intact, only the last 15-20 percent of old-growth remains in the Pacific Northwest, and logging and road building are advancing into the northern coastal rainforests. From 36,000 feet our activities are clearly transformative in a “Bigfoot” sense: furthering the planetary scale of forest degradation. For the greater good of this and future generations, rainforests need to be sustainably managed for their vast carbon stores, salmon resources, and clean water – benefits that reach their greatest capacity in old-growth and intact rainforests. From an ecosystems services standpoint, old-growth rainforests are the true working forests. The massive long-lived trees, dense foliage, and rich soils of the Tongass rainforest soak up and store the equivalent of over 200 times Alaska’s annual carbon dioxide pollution. The Great Bear rainforest absorbs the equivalent of about six times British Columbia’s annual emissions, and the Pacific Northwest rainforests absorb the equivalent of roughly 13 times the carbon dioxide emissions of the entire U.S. Both the Tongass and Great Bear are global resources for salmon production (the Pacific Northwest used to be), an economic engine for regional economies. Under “no-logging” scenarios, the Tongass rainforest alone could generate $4 – 7 million dollars annually in the sale of carbon credits should this exchange take off globally, and assuming carbon trades at about $20 per metric ton (based on 2006 estimates). And while we must reduce our greenhouse gas pollution to stabilize the global climate, rainforests in particular, and forests generally, play a pivotal role in these efforts. A 21st century vision of sustainability must become more than talk at the United Nations when its members assemble again in September to assess progress on the International Year of Forests. This is especially important here in the United States, which is the world leader in greenhouse gas pollution and according to the FAO (2005) was ranked 7th globally for deforestation of its old-growth forests. Salmon, carbon, and clean water should be the yardsticks by which we measure progress toward sustainable forest management for the Pacific Coastal rainforests. As we move forward, timber production will be an important byproduct of ecologically based restoration. At the same time, we need to reduce, reuse, and recycle wood products while increasing reliance on alternative fibers (e.g., hemp grown on agricultural lands) to pick up the slack. As I wrap up my facts for the upcoming talk, the sobering view from my window seat reminds me that the next time I travel to Alaska to be sure to grab the aisle seat or watch a movie!
biodiversity
carbon
forests
logging
rainforests
roads