Rants from the Hill is cross-posted from High Country News

Although I’ve written 45 of these Rants from the Hill since the essay series launched back in July, 2010, there’s one word I have studiously avoided using. It is a filthy word, one that immediately conjures up a range of unpleasant associations. It is so very nasty that even I knew better than to allow this word to creep into a single sentence of a single Rant. Needless to say, it is a four-letter word. But I have decided that, as a Nevada writer, I must now reveal this dirty word. To quote the Eighties Robot character in the 2011 movie The Muppets: “R.  E.  N.  O. That spells Reno.”

In fact, I have the Muppets to thank—or, more accurately, to blame—for my need to finally reveal this foul word. Not long ago I was watching The Muppets with my two young daughters when, to my surprise, I glanced up to see a shot of the famous Reno Arch, an unmistakable local landmark which spans the main street of our downtown and reads “Biggest Little City in the World.” “Look, girls!” I exclaimed, pointing at our town on the TV screen. “The Muppets have come to Reno!” It goes without saying that this was big news, because it suggested that our little city was going to get its fifteen minutes of fame—an outcome that virtually assured by the fact that loving the Muppets is one of only four things all Americans have in common (the other three: hate taxes, think we sound great singing in the shower, can’t understand why Kim Kardashian is famous). Having your town appear in a Muppet movie is like receiving the Good Housekeeping Seal of Approval, with the important difference that nobody has subscribed to Good Housekeeping since 1959, while this Muppet flick opened in 3,500 theaters and grossed north of 90 million bucks.

Although I didn’t mention it to the girls, I was also thrilled that Reno, which is a lovely town but one with a bad reputation, might at last be associated with something wholesome. In fact, the nasty reputation of northern Nevada in the broader culture hasn’t changed appreciably since it was characterized by my patron saint, Mark Twain, back in 1862: “If the devil were set at liberty and told to confine himself to Nevada Territory, he would get homesick and go back to hell again.” Some might argue that we brought this dubious reputation on ourselves by cultivating the questionable economic strategy of making legal whatever is illegal elsewhere, which is what we did, by turns, with prizefighting, gambling, divorce, and prostitution (which begs the question of how we let anybody beat us to legalizing same-sex marriage and weed). But for that one brief and shining moment, sitting with my beautiful daughters and watching Kermit rolling into Reno in his Rolls-Royce Silver Spur, I indulged a fantasy of redemption. I was, for that breathless instant, another benighted Nevadan just waiting for that third seven to spin into place. 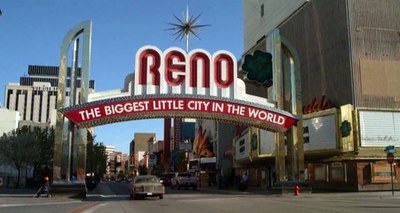 As so often happens in Reno, however, my fortunes changed rapidly, unexpectedly, and for the worse. The film cut suddenly to an even more familiar site: a small, run-down casino out on the edge of town, a place I drive by each day while taking the girls to school. This particular casino’s proximity to the local feed store, the rural liquor store, and a dilapidated taproom virtually ensured my familiarity with it—this is, after all, my own personal redneck strip mall—and though I haven’t yet had occasion to use the bail bondsman whose storefront is just across the gravel parking lot, I find it comforting to know that he’s close by in a pinch. The Muppets were now really on my home turf: they had fled the city proper for the broken down rural-urban edge that is my natural habitat.

To appreciate why the Muppets’ cinematic appearance at my local watering hole and poker parlor appeared so inauspicious, you need to understand the film’s basic plotline. The trip to northern Nevada is part of Kermit’s heroic quest to get the old Muppet crew back together again to put on one last show, the proceeds of which will save the Muppet studios in Hollywood from the clutches of an avaricious oil baron. The frog’s odyssey to reunite his troop leads him to my local casino because the Muppets’ stand-up comic, Fozzie Bear (the ursine humorist who, along with Twain, is my other patron saint), has fallen on hard times and has been driven to—of all the God-forsaken hell holes in the big West—Reno. Here, in the darkness on the edge of town, Fozzie has in desperation assembled the “Moopets,” a second-rate Muppet tribute band consisting of unconvincing Muppet impersonators, including Miss Poogy, Kermoot, and Animool, the latter a cheap knock off of the manic, hairy drummer Muppet who is here played with genuine panache by a real-life rock superstar, Nirvana drummer Dave Grohl. 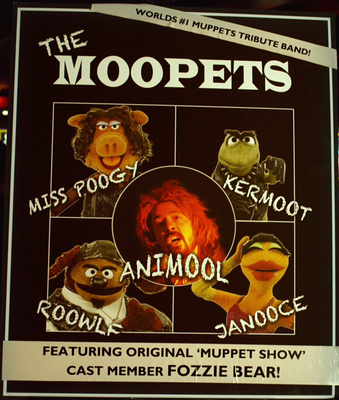 The scene inside the casino is itself a tribute to vintage Reno despair—a despair so authentic and mundane as to be both hilarious and startlingly familiar. When Kermit and his pals enter the derelict casino Fozzie is already onstage with the flaccid Moopets, whose boredom is palpable. Surrounding the little stage are a few slumped-over, zoned-out patrons who are, if possible, even more jaded and inattentive than the half-assed tribute band itself. One may be a hooker. Several others are certainly drunks. Singing a lame casino advertisement to the tune of the Muppets’ celebrated anthem, “Rainbow Connection,” the stuffed bear croaks out a few uninspired lines:

“Why are there such great deals, on our hotel rooms?

“Our wedding chapel is twenty four hours / No marriage certificate is needed . . .”

#ForewordFriday: Urban Design for the Future
January 24, 2020
It’s Time to Talk About Moving Cities in the Face of Climate Change
January 22, 2020
Fix It and They Will Come
January 6, 2020